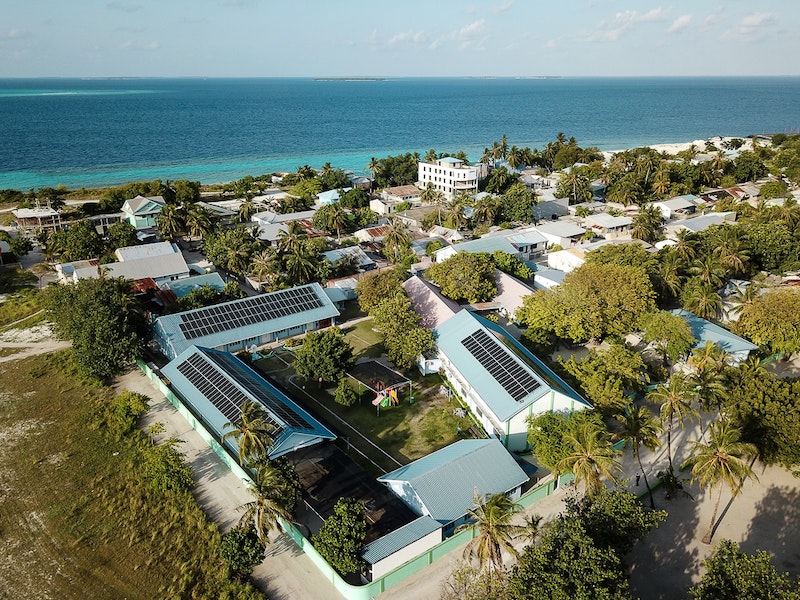 Microgrid experts at DHYBRID have installed microgrids on a total of 26 islands on the Shaviyani and Noonu Atolls of the Maldives and equipped them with a central monitoring and control system (SCADA). The project sponsored by the Maldivian Ministry of Environment and the Climate Investment Funds aims to substantially decrease carbon emissions as well as the costs of energy generation on these remote islands. The solar energy capacity installed is about 2.65 megawatts, and the capacity of the battery storage systems used is around 3.2 megawatt hours.
The solar addition to the existing microgrids on both atolls is part of the Preparing Outer Islands for Sustainable Energy Development project, or POISED, which sees to making the energy supply of the outer atolls and islands as well as the region surrounding the main island of Malé sustainable. For further information see the IDTechEx report on Distributed Generation: Off-Grid Zero-Emission kW-MW 2020-2040.
Objective: Reducing high electricity prices and emissions
Almost all electricity consumed in the Maldives is generated from imported diesel. The costs for importing energy made up about 20 percent of the gross domestic product in 2016. Transporting this electrical energy to the remote islands and atolls to the south adds to these costs on a local level. At rates of 20 to 70 US cents per kilowatt hour, the electricity prices in the Maldives are among the highest in all of Southern Asia. Plus the diesel systems have high emissions in the form of CO2, pollutants and noise. Photovoltaic installations and battery-based storage units significantly reduce the diesel generators' run times.
The central energy management system, the Universal Power Platform (UPP), from DHYBRID is what sets its microgrids apart. The UPP dynamically controls all energy flows in the grid, from the battery inverter to the diesel generator. It also continuously measures the grid and storage system parameters as well as the load profiles and prioritizes solar energy whenever possible. Only when the combined power from the PV installation and storage system is insufficient the diesel unit switches on.
The advantages of the new microgrids are immediately noticeable. On the island of Fohdoo, a photovoltaic installation with a power output of 100 kilowatts supplies about 30 percent of the island's electricity, saving around 35,000 liters of diesel per year. "The generator remains shut off for the majority of the day," says Abdulla Nashith, Director of the Technical Services and Green Energy Department of Fenaka Corporation Limited, a state-owned utility company which is responsible for most of the southern atolls.
Central monitoring of all 26 islands
The new microgrids are monitored in the utility's central monitoring stations at Fenaka's headquarters in the Maldivian capital city of Malé. All 26 islands are centrally monitored by a SCADA system developed by DHYBRID. Access is granted via a secure, encrypted VPN connection. "From Malé, we can monitor energy generation and other parameters on the other islands in real time thanks to the centralized SCADA system. This enables us to respond quickly to any problems that occur," Nashith adds. New solar-diesel hybrid grids are in the pipeline in the next several years for 69 more Maldivian islands. They will also be linked to the central SCADA system.
In addition to supplying components and connecting the system, DHYBRID also trains local personnel to operate it. "DHYBRID has a wide range of experience, with over 70 projects worldwide. Most of the microgrids in use in the Maldives rely on our technology. We transfer this knowledge to our partners as part of our training programs so that they can continue to operate the installations as efficiently as possible," says Benedikt Böhm, CEO of DHYBRID.
Source and top image: DHYBRID