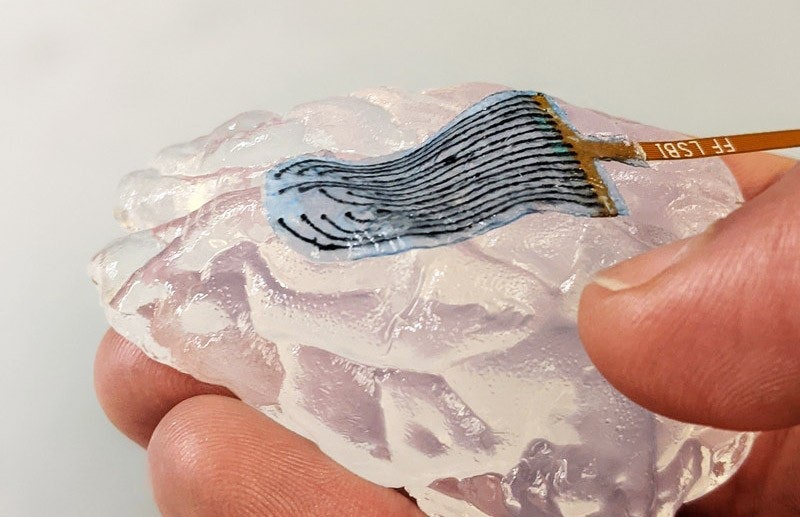 Researchers from The University of Manchester and Harvard University have collaborated on a pioneering project in bioengineering, producing metal-free, hydrogel electrodes that flex to fit the complex shapes inside the human body.
The study, led by Harvard's Wyss Institute for Biologically Inspired Engineering in collaboration with the Laboratory of Soft Biolectronic Interfaces at EPFL in Lausanne and Manchester's National Graphene Institute (NGI), mixed carbon nanotubes with a water-based, defect-free solution of graphene, originally developed at the NGI by a team led by Professor Cinzia Casiraghi.
Electrodes are frequently used in medicine to monitor or deliver electrical impulses inside and outside the human body, however performance is currently limited by the rigidity of devices that do not match the soft springiness of living tissue, a property known as viscoelasticity. Electrodes may detach under movement or require greater current to affect their intended target because their shape does not fit precisely to the host site. For further information see the IDTechEx report on Flexible Electronics in Healthcare 2020-2030.
The key, according to lead authors Ms Christina Tringides and Professor David Mooney from Harvard, was a hydrogel that could mimic the viscoelasticity of tissue, alongside a conductive ink that could also perform well under flexion.
Replacing rigid metals
Tringides and Mooney, in collaboration with the Nanomedicine Lab in Manchester, identified a mixture of graphene flakes and carbon nanotubes as the best conductive filler, replacing the use of traditional rigid metals.
"Part of the advantage of these materials is their long and narrow shape," explained Tringides. "It's a bit like throwing a box of uncooked spaghetti on the floor - because the noodles are all long and thin, they're likely to cross each other at multiple points. If you throw something shorter and rounder on the floor, like rice, many of the grains won't touch at all."
While the carbon nanotubes used are commercially available, the graphene flake suspension is a process patented by The University of Manchester, currently exploited for printed electronics and biomedical applications. This work demonstrated that you need both materials to achieve optimal electrode performance - carbon nanotubes or graphene alone would not suffice.
Cinzia Casiraghi, Professor of Nanoscience from the NGI and Department of Chemistry at Manchester, said: "This work demonstrates that high-quality graphene dispersions - made in water by a simple process based on a molecule that one can buy from any chemical supply - have strong potential in bioelectronics. We are very interested in exploiting our graphene (and other 2D materials) inks in this field."
Collaborative effort
Kostas Kostarelos, Professor of Nanomedicine and leader of the Nanomedicine Lab, added: "This truly collaborative effort between three institutions is a step forward in the development of softer, more adaptable and electroactive devices, where traditional technologies based on bulk and rigid materials cannot be applied to soft tissues such as the brain."
Source: University of Manchester
Top image source: Wyss Institute at Harvard University