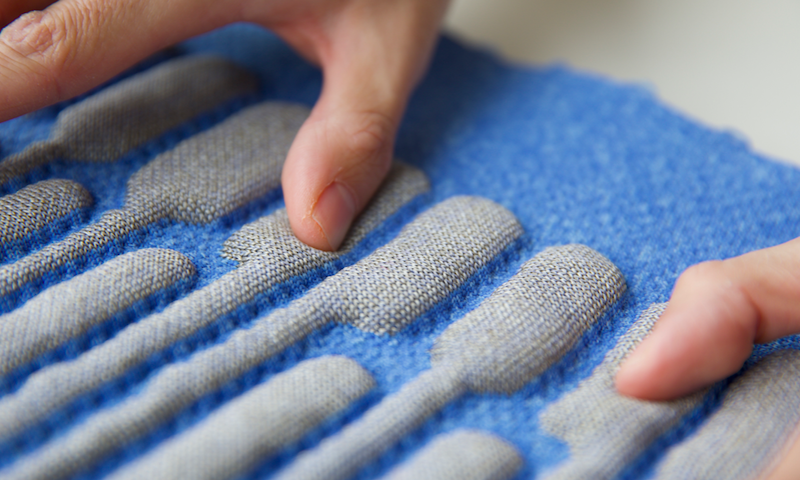 Ever had to make the difficult choice between a chunky knit scarf and a new keyboard as part of your monthly budget? Boy, does the Massachusetts Institute of Technology's (MIT) world-famous Media Lab have the piece of convergence culture for you!
Massachusetts Institute of Technology's (MIT) world-famous Media Lab is seizing on the observation that most of the world's keyboards up until this point have been somewhat rigid, the KnittedKeyboard II seeks to spark a paradigm shift in expectations by way of an interactive, textile-based musical device with the familiar layout of piano keys. And the unfamiliar nature of, well, being a piece of musical knitwear. For further information see the IDTechEx report on E-textiles and Smart Clothing 2020-2030: Technologies, Markets and Players.
"It's a musical keyboard made out of yarns that is expressive, soft, and stretchable," Irmandy Wicaksono, an engineer and designer who is currently a Ph.D. candidate in the MIT Media Lab, told Digital Trends. "It's all textile-based, which makes it transportable, aesthetically unique, and feel good on the fingers. This is fabricated utilizing machine knitting, allowing us to fully customize the looks or colors, the number of keys and octaves, as well as (the tactile properties such as])squishiness and stretchiness and electrical properties ... by computationally programming the knitting pattern and feeding various common and functional yarns."
The project reportedly started out with the intention of being a wearable, foldable keyboard for the late American jazz musician Lyle Mays to use for composing on the road. In the end, Wicaksono said, "the project became more than that."
A musical experiment
A knitted keyboard is, of course, kind of gimmicky. But that's no bad thing. It's the kind of eye-catching experimentation that can yield interesting results. In this case, it opens up new ways to play discrete notes, effects, and modulations. It's not the first unusual tech-meets-musical instrument project we've seen come out of MIT, but it's certainly up there with the most interesting.
"The fact that the knitted keyboard is squishy and elastic, while also intrinsically integrated with fabric sensors that are responsive to pressure and stretch, enables an intimate relationship between the physical gestures and the sound," Wicaksono said. "Some comments I have received from musicians are that it feels that the fabric interface is alive, as it has a direct embodiment of the sound and the expressions. It makes the experience organic."
Wicaksono's work goes far beyond wearable instruments. "There are other real-world applications with this e-textile technology, as we know textile is ubiquitous," he said. "I like this idea of reinventing textiles we already have — like a scarf, a shirt, an upholstery, or a carpet. Besides physical interaction, my other work (involves) looking into embedding electronics into shirts for sports and medical applications or carpets for activity recognition."
And, in the meantime, are there any plans to commercialize this keyboard? "Since the KnittedKeyboard was fabricated using machine knitting, a manufacturing process that has been pervasive in the garment and technical fabrics industry, the product is certainly viable for commercialization," Wicaksono said. "Machine knitting is an additive manufacturing process. Therefore, besides being customizable, it is more sustainable and cost-effective, as it creates little to no waste."
Coming soon to a music store near you, then. Maybe.
Source and top image: MIT Media Lab