The Most Complex Flexible Microprocessor Yet 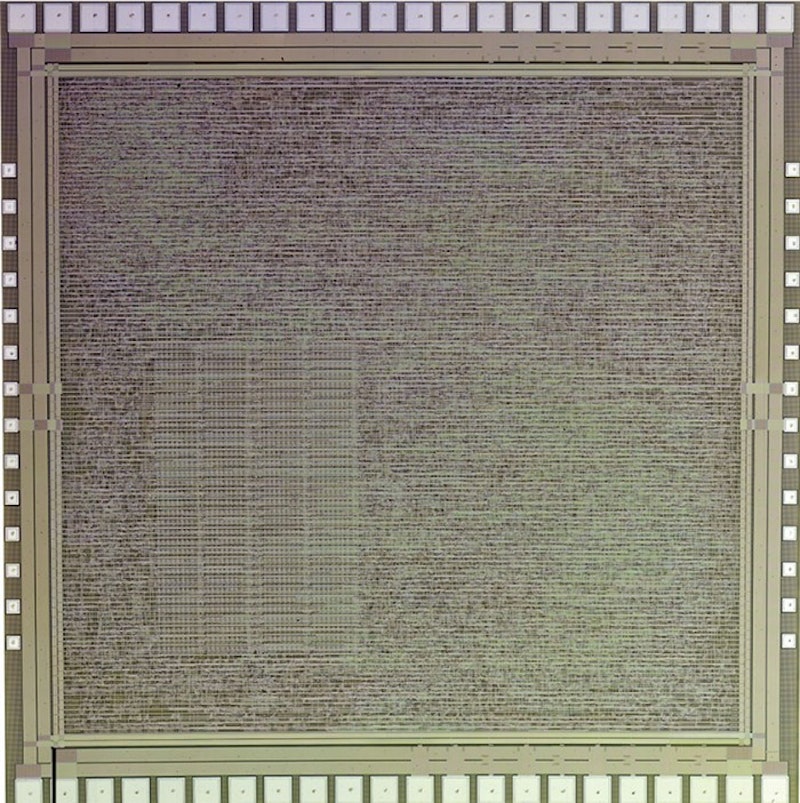 This month marks the 50th anniversary of the microprocessor. But developments in these semiconductor chips, which are the heart of every electronic device, continue with gusto. Researchers at UK-based semiconductor chip firms have now made the largest flexible microprocessor, which they say should help with efforts to add smart circuitry to everyday objects like clothing and packaging.
The low-cost chip carries over 12 times as many transistors as previous flexible microprocessors, and is ultra-thin and flexible with good performance. The team made the chip from metal-oxide transistors using conventional manufacturing equipment. And while the chip's performance may not match that of silicon circuits, "this is more about putting low amounts of computing power in everyday consumer goods," says Catherine Ramsdale, senior vice president of technology at PragmatIC Semiconductor. Such chips could lead to sensors on milk jugs and food to detect spoilage, on bandages to monitor wound healing, or on retail products to track as they go from factory to shelves.
Today's high-performance computer chips are based on silicon microprocessors. But silicon's high processing temperatures, rigidity, and cost aren't suited for flexible electronics intended for clothes, paper, and plastic. For those applications, most researchers have turned to organic or metal-oxide semiconductor materials. Some researchers have also used transistors made of 2D materials such as carbon nanotubes or molybdenum disulfide. For further information see the IDTechEx report on Flexible Hybrid Electronics 2020-2030: Applications, Challenges, Innovations and Forecasts.
Ramsdale, Emre Ozer of Arm Ltd., and their colleagues used indium-gallium-zinc oxide (IGZO) to make their thin-film transistors. They use traditional techniques and machinery to create the devices by depositing different materials layer by layer on a polyimide film.
The team coated the film on a glass support during the manufacturing process and then peeled it off once the chip was finished. Compared with making silicon chips, this process is simpler and uses lower temperatures. "We can make the chip in a couple days as opposed to weeks for silicon," Ramsdale says.
With over 39,000 transistors, the microprocessor is the most complex flexible one made to date, she says. The key to achieve this feat was careful design and testing to reduce the size of the transistors and other devices to make uniform, quality devices. The chip's speed isn't impressive at 29 kHz—silicon transistors work 1,000 times faster—but these flexible chips wouldn't be used in the same applications as silicon ones.
Building a flexible circuit with such a large number of transistors is noteworthy, says Ravinder Dahiya, an engineer at the University of Glasgow. One shortcoming is that IGZO only produces n-type transistors, which conduct electrons. Complex computer circuits also rely on p-type transistors that conduct positive charges called holes. A chip that uses only n-type transistors consumes much more power than one that uses both, Dahiya says. That increased power demand limits the number of devices you can put on a microprocessor. "Going beyond 100,000 transistors is going to be a challenge with IGZO," he says.
Still, this complex microprocessor is a gamechanger for flexible electronics, says Kris Myny, a researcher at the electronics research center IMEC. "This is an impressive advancement of the state of the art and extremely valuable for the field of thin-film integrated circuits on foil."
Source: American Chemical Society
Top image: Nature