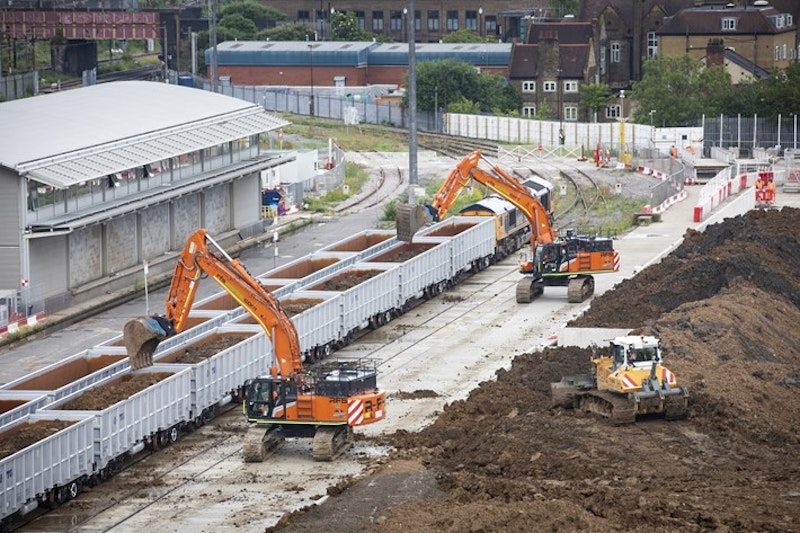 In a UK first, on-site 3D reinforced concrete printing is set to deliver environmental, cost and community benefits for Britain's new high speed rail network. The cutting-edge technology, called 'Printfrastructure', will be deployed by HS2 Ltd's London tunnels contractor SCS JV (Skanska Costain STRABAG Joint Venture), in a move that represents a major step forward in construction technology.
HS2 is a new high speed railway linking up London, the Midlands, the North and Scotland serving over 25 stations, including eight of Britain's 10 largest cities and connecting around 30 million people. The construction of the new railway is split into three phases - Phase One linking London and the West Midlands; Phase 2a linking the West Midlands and the North via Crewe; and Phase 2b completing the railway to Manchester and Leeds.
Printing concrete with computer operated robots will enable SCS JV to make structures on site, instead of transporting them as pre-cast slabs by road before being assembled and lowered into place by large cranes. As flexible mobile technology, 3D concrete printing enables the technique to be deployed in physically-restricted areas - avoiding the need to develop complicated and potentially expensive logistical plans. For further information see the IDTechEx report on 3D Printed Materials Market 2020-2030: COVID Edition.
And where HS2 construction is happening besides a live railway, it offers an opportunity to deliver works without disrupting the travelling public. This is because a robot will print the reinforced concrete, enabling construction to continue and trains to run at the same time. Previously work would have taken place overnight after trains have stopped running, potentially disturbing the local community, or would have required the suspension of services to ensure safe working.
Using a computer-controlled robot enables the reinforced concrete structures to be printed with a strengthening unique internal lattice structure, which not only significantly reduces the quantity of concrete required but also cuts waste. But the breakthrough is underlined by technology developed by SCS JV's Worcestershire-based partner, ChangeMaker 3D. Working with UK advanced materials specialist, Versarien, the high-tech SME's innovation takes the 3D concrete printing process and combines it with the strongest material ever tested: graphene. Concrete with microscopic strands of graphene only several atoms thick running through it like stripes in a stick of rock replaces traditional steel to help drive improved site safety, greater construction flexibility, shorter build time and a smaller carbon footprint.
SCS JV estimates that the process it is developing with the Midlands firm could reduce the concrete used and contribute toward reducing carbon by up to 50%. By removing steel and simplifying the construction process, which will no longer require cranes and significantly fewer delivery trucks, the carbon reduction could be even greater.
HS2 innovation manager Rob Cairns said: "The project SCS JV and ChangeMaker 3D are collaborating on is a fantastic demonstration of the kind of far-reaching innovations HS2 enables. With a build programme spanning the decade and across the country, the project is creating an ideal environment to develop technologies with the potential to transform how major infrastructure is built."
SCS JV Temporary Works Manager, Andrew Duck, said "Automation enabled by Printfrastructure's 3D reinforced concrete printing creates a factory-like environmental that delivers a high-quality product that both increases efficient use of materials, and reduces our carbon footprint. It is important that we give technologies such as Printfrastructure the opportunity to flourish because of the possibilities it offers the industry to make a step change in how projects are delivered."
ChangeMaker 3D Director Natalie Wadley, said: "ChangeMaker 3D stands for sustainability in the built environment. Through our Printfrastructure innovation project with SCS JV - a UK first for this technology - and together with brilliant project partners, we are proud to support the rail sector to unlock lower carbon construction."
Source: High Speed Two Ltd
Top image: Skanska