Technique for Recycling Nanowires in Electronics 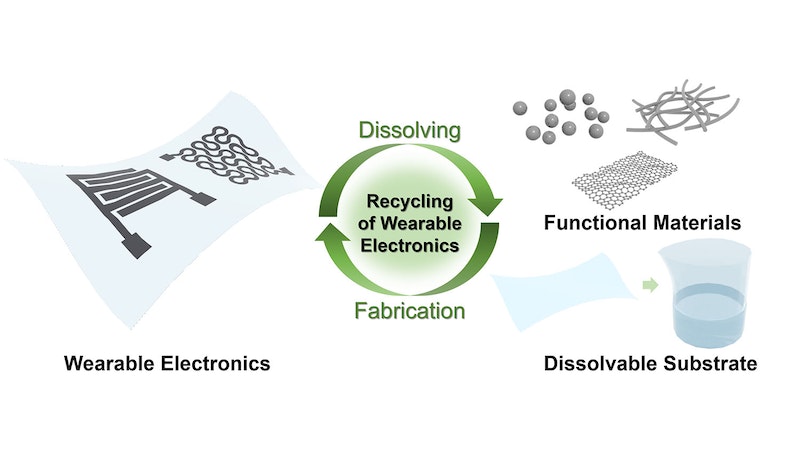 Researchers at North Carolina State University demonstrated a low-cost technique for retrieving nanowires from electronic devices that have reached the end of their utility and then using those nanowires in new devices. The work is a step toward more sustainable electronics.
"There is a lot of interest in recycling electronic materials because we want to both reduce electronic waste and maximize the use we get out of rare or costly materials," says Yuxuan Liu, first author of a paper on the work and a Ph.D. student at NC State. "We've demonstrated an approach that allows us to recycle nanowires, and that we think could be extended to other nanomaterials - including nanomaterials containing noble and rare-earth elements."
"Our recycling technique differs from conventional recycling," says Yong Zhu, corresponding author of the paper and the Andrew A. Adams Distinguished Professor of Mechanical and Aerospace Engineering at NC State. "When you think about recycling a glass bottle, it is completely melted down before being used to create another glass object. In our approach, a silver nanowire network is separated from the rest of the materials in a device. That network is then disassembled into a collection of separate silver nanowires in solution. Those nanowires can then be used to create a new network and incorporated into a new sensor or other devices."
The new recycling technique takes into account the entire life cycle of a device. The first step is to design devices using polymers that are soluble in solvents that will not also dissolve the nanowires. Once a device has been used, the polymer matrix containing the silver nanowires is dissolved, leaving behind the nanowire network. The network is then placed in a separate solvent and hit with ultrasound. This disperses the nanowires, separating them out of the network. For further information see the IDTechEx report on Flexible, Printed and Organic Electronics 2020-2030: Forecasts, Technologies, Markets.
In a proof-of-concept demonstration, the researchers created a wearable health sensor patch that could be used to track a patient's temperature and hydration. The sensor consisted of silver nanowire networks embedded in a polymer material. The researchers tested the sensors to ensure that they were fully functional. Once used, a sensor patch is normally discarded.
But for their demonstration, the researchers dissolved the polymer in water, removed the nanowire network, broke it down into a collection of individual nanowires, and then used those nanowires to create a brand-new wearable sensor. While there was minor degradation in the properties of the nanowire network after each "life cycle," the researchers found that the nanowires could be recycled four times without harming the sensor's performance. After four life cycles, you can improve the performance of the nanowire network by introducing new silver nanowires into the mix.
"Using our approach, you get far more use from the nanowires," Zhu says. "And even after the nanowires have broken down many times, to the point where they can't be reused, we can still use them as feedstock for conventional recycling. It's a tremendous reduction in waste."
One key to the recycling process is identifying a solvent with a low surface tension for use in breaking up the nanowire network.
"Low surface tension is important because it makes it easier for the solvent to diffuse into the narrow junctions between nanowires in the network, facilitating the disassembling of the network," Liu says.
The researchers found that it is also important to find the right balance of time when breaking up the nanowire networks with ultrasound. If you apply the ultrasound for too long, you can break the nanowires. If you don't apply the ultrasound for long enough, you can end up with clumps of nanowires.
"The approach we've demonstrated here could be used to recycle other nanomaterials - such as nanoparticles, carbon nanotubes, other types of nanowires, and two-dimensional materials - as long as they are used in the form of a network," Zhu says.
Source and top image: North Carolina State University