Decades of Research Brings Quantum Dots to Brink of Widespread Use 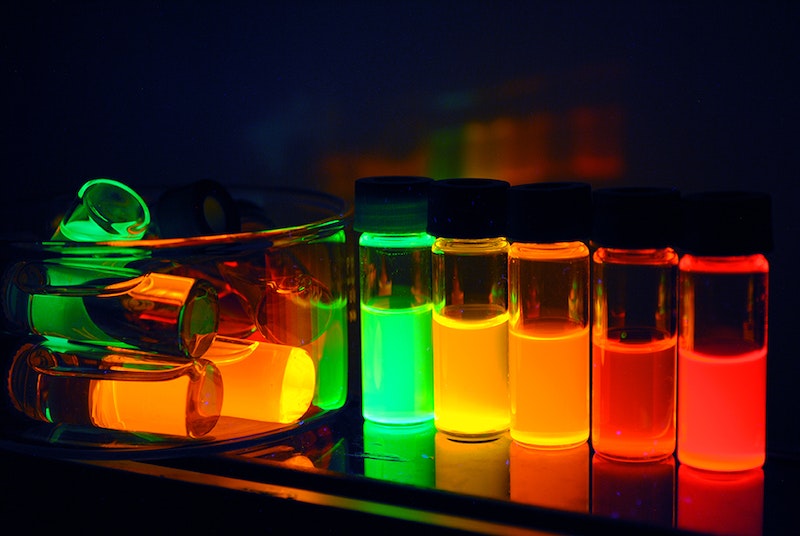 A new article in Science magazine gives an overview of almost three decades of research into colloidal quantum dots, assesses the technological progress for these nanometer-sized specs of semiconductor matter, and weighs the remaining challenges on the path to widespread commercialization for this promising technology with applications in everything from TVs to highly efficient sunlight collectors.
"Thirty years ago, these structures were just a subject of scientific curiosity studied by a small group of enthusiasts. Over the years, quantum dots have become industrial-grade materials exploited in a range of traditional and emerging technologies, some of which have already found their way into commercial markets," said Victor I. Klimov, a coauthor of the paper and leader of the team conducting quantum dot research at Los Alamos National Laboratory. For further information see the IDTechEx report on Quantum Dot Materials and Technologies 2020-2030: Trends, Markets, Players.
Many advances described in the Science article originated at Los Alamos, including the first demonstration of colloidal quantum dot lasing, the discovery of carrier multiplication, pioneering research into quantum dot light emitting diodes (LEDs) and luminescent solar concentrators, and recent studies of single-dot quantum emitters. Using modern colloidal chemistry, the dimensions and internal structure of quantum dots can be manipulated with near-atomic precision, which allows for highly accurate control of their physical properties and thereby behaviors in practical devices.
A number of ongoing efforts on practical applications of colloidal quantum dots have exploited size-controlled tunability of their emission color and high-emission quantum yields near the ideal 100 percent limit. These properties are attractive for screen displays and lighting, the technologies where quantum dots are used as color converting phosphors. Due to their narrowband, spectrally tunable emission, quantum dots allow for improved color purity and more complete coverage of the entire color space compared to the existing phosphor materials. Some of these devices, such as quantum dot TVs, have already reached technological maturity and are available in commercial markets.
The next frontier is creating technologically viable LEDs, powered by electrically driven quantum dots. The Science review describes various approaches to implement these devices and discusses the existing challenges. Quantum LEDs have already reached impressive brightness and almost ideal efficiencies near the theoretically defined limits. Much of this progress has been driven by continuing advances in understanding the performance-limiting factors such as nonradiative Auger recombination. The article also discusses the status and challenges of solution-processable quantum dot lasers.
"Making these lasers available would benefit a range of technologies, including integrated photonic circuits, optical communication, lab-on-a-chip platforms, wearable devices, and medical diagnostics," Klimov said.
Los Alamos researchers have contributed key advances in this area including the elucidation of mechanisms for light amplification in colloidal nanostructures and the first demonstration of a lasing effect using these materials.
"The primary current challenge is demonstrating lasing with electrical pumping," Klimov said. "Los Alamos has been responsible for several important milestones on the path to this objective including the realization of optical gain with electrical excitation and the development of dual-function devices that operate as an optically pumped laser and a standard electrically driven LED."
Quantum dots are also of great potential utility in solar harvesting and light sensing technologies. Due to their tunable bandgap, they can be engineered to target a particular range of wavelengths, which is especially attractive for realizing inexpensive photodetectors for the infrared spectral range. In the realm of solar energy technologies, colloidal quantum dots have been exploited as active elements of both solar cells and luminescent sunlight collectors.
In the case of photovoltaics (PV), the quantum dot approach could be used to realize a new generation of inexpensive, thin-film PV devices prepared by scalable solution-based techniques such as roll-by-roll processing. In addition, they could enable conceptionally new photoconversion schemes derived from physical processes unique to ultrasmall "quantum-confined" colloidal particles. One such process, carrier multiplication, generates multiple electron-hole pairs by a single absorbed photon. This process, first reported by Los Alamos researchers in 2004, has been the subject of intense research in the context of its applications in both PVs and solar photochemistry.
"Another highly promising area is quantum dot luminescent solar concentrators or LSCs," Klimov said. "Using the LSC approach, one can, in principle, convert standard windows or wall sidings into power generating devices. Along with roof-top solar modules, this could help supply an entire building with clean energy. While the LSC concept was introduced back in 1970s, it truly flourished only recently due to introduction of specially engineered quantum dots."
Los Alamos researchers have contributed many important advances to the LSC field including the development of practical approaches for tackling the problem of light self-absorption and developing high-efficiency bi-layer (tandem) devices. Several start-ups, including a Laboratory spin-off, UbiQD Inc., have been actively pursuing commercialization of a quantum dot LSC technology.
Source and top image: Los Alamos National Laboratory