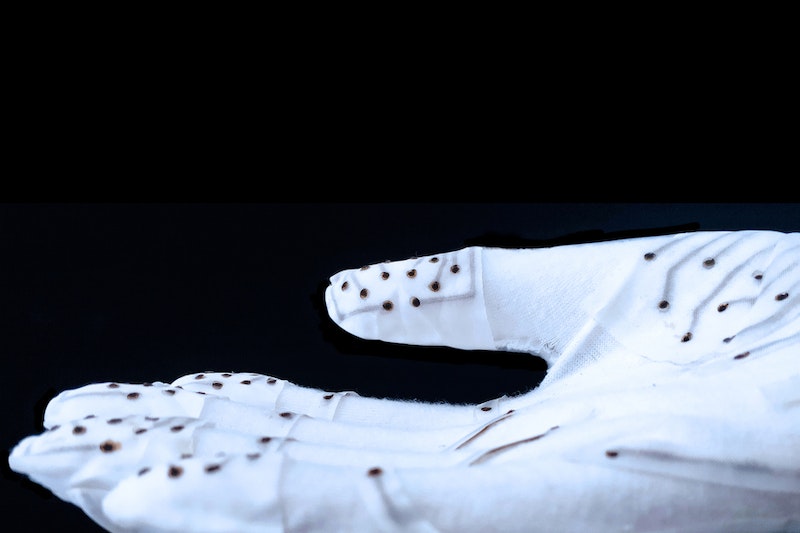 When you pick up a balloon, the pressure to keep hold of it is different from what you would exert to grasp a jar. And now engineers at MIT and elsewhere have a way to precisely measure and map such subtleties of tactile dexterity. The team has designed a new touch-sensing glove that can "feel" pressure and other tactile stimuli. The inside of the glove is threaded with a system of sensors that detects, measures, and maps small changes in pressure across the glove. The individual sensors are highly attuned and can pick up very weak vibrations across the skin, such as from a person's pulse.
When subjects wore the glove while picking up a balloon versus a beaker, the sensors generated pressure maps specific to each task. Holding a balloon produced a relatively even pressure signal across the entire palm, while grasping a beaker created stronger pressure at the fingertips. The researchers say the tactile glove could help to retrain motor function and coordination in people who have suffered a stroke or other fine motor condition. The glove might also be adapted to augment virtual reality and gaming experiences. The team envisions integrating the pressure sensors not only into tactile gloves but also into flexible adhesives to track pulse, blood pressure, and other vital signs more accurately than smart watches and other wearable monitors. For further information see the IDTechEx report on Haptics 2021-2031: Technologies, Market & Players.
"The simplicity and reliability of our sensing structure holds great promise for a diversity of health care applications, such as pulse detection and recovering the sensory capability in patients with tactile dysfunction," says Nicholas Fang, professor of mechanical engineering at MIT. Fang and his collaborators detail their results in a study appearing today in Nature Communications. The study's co-authors include Huifeng Du and Liu Wang at MIT, along with professor Chuanfei Guo's group at the Southern University of of Science and Technology (SUSTech) in China.

The glove's pressure sensors are similar in principle to sensors that measure humidity. These sensors, found in HVAC systems, refrigerators, and weather stations, are designed as small capacitors, with two electrodes, or metal plates, sandwiching a rubbery "dielectric" material that shuttles electric charges between the two electrodes. In humid conditions, the dielectric layer acts as a sponge to soak up charged ions from surrounding moisture. This addition of ions changes the capacitance, or amount of charge between the electrodes, in a way that can be quantified and converted to a measurement of humidity.
In recent years, researchers have adapted this capacitive sandwich structure for the design of thin, flexible pressure sensors. The idea is similar: When a sensor is squeezed, the balance of charges in its dielectric layer shifts, in a way that can be measured and converted to pressure. But the dielectric layer in most pressure sensors is relatively bulky, limiting their sensitivity.
For their new tactile sensors, the MIT and SUSTech team did away with the conventional dielectric layer in favor of a surprising ingredient: human sweat. As sweat naturally contains ions such as sodium and chloride, they reasoned that these ions could serve as dielectric stand-ins. Rather than a sandwich structure, they envisioned two thin, flat electrodes, placed on the skin to form a circuit with a certain capacitance. If pressure was applied to one "sensing" electrode, ions from the skin's natural moisture would accumulate on the underside, and change the capacitance between both electrodes, by an amount that they could measure.
They found they could boost the sensing electrode's sensitivity by covering its underside with a forest of tiny, bendy, conductive hairs. Each hair would serve as a microscopic extension of the main electrode, such that, if pressure were applied to, say, a corner of the electrode, the hairs in that specific region would bend in response, and accumulate ions from the skin, the degree and location of which could be precisely measured and mapped.

In their new study, the team fabricated thin, kernel-sized sensing electrodes lined with thousands of gold microscopic filaments, or "micropillars." They demonstrated that they could accurately measure the degree to which groups of micropillars bent in response to various forces and pressures. When they placed a sensing electrode and a control electrode onto a volunteer's fingertip, they found the structure was highly sensitive. The sensors were able to pick up subtle phases in the person's pulse, such as different peaks in the same cycle. They could also keep up accurate pulse readings, even as the person wearing the sensors waved their hands as they walked across a room.
"Pulse is a mechanical vibration that can also cause deformation of the skin, which we can't feel, but the pillars can pick up," Fang says.
The researchers then applied the concepts of their new, micropillared pressure sensor to the design of a highly sensitive tactile glove. They started with a silk glove, which the team purchased off the shelf. To make pressure sensors, they cut out small squares from carbon cloth, a textile that is composed of many thin filaments similar to micropillars. They turned each cloth square into a sensing electrode by spraying it with gold, a naturally conductive metal. They then glued the cloth electrodes to various parts of the glove's inner lining, including the fingertips and palms, and threaded conductive fibers throughout the glove to connect each electrode to the glove's wrist, where the researchers glued a control electrode.
Several volunteers took turns wearing the tactile glove and performing various tasks, including holding a balloon and gripping a glass beaker. The team collected readings from each sensor to create a pressure map across the glove during each task. The maps revealed distinct and detailed patterns of pressure generated during each task. The team plans to use the glove to identify pressure patterns for other tasks, such as writing with a pen and handling other household objects. Ultimately, they envision such tactile aids could help patients with motor dysfunction to calibrate and strengthen their hand dexterity and grip.
"Some fine motor skills require not only knowing how to handle objects, but also how much force should be exerted," Fang says. "This glove could provide us more accurate measurements of gripping force for control groups versus patients recovering from stroke or other neurological conditions. This could increase our understanding, and enable control."
This research was supported, in part, by the Joint Center for Mechanical Engineering Research and Education at MIT and SUSTech.
Source and top image: MIT