First Railway Station Upgrade in Europe to Use Photovoltaic Film 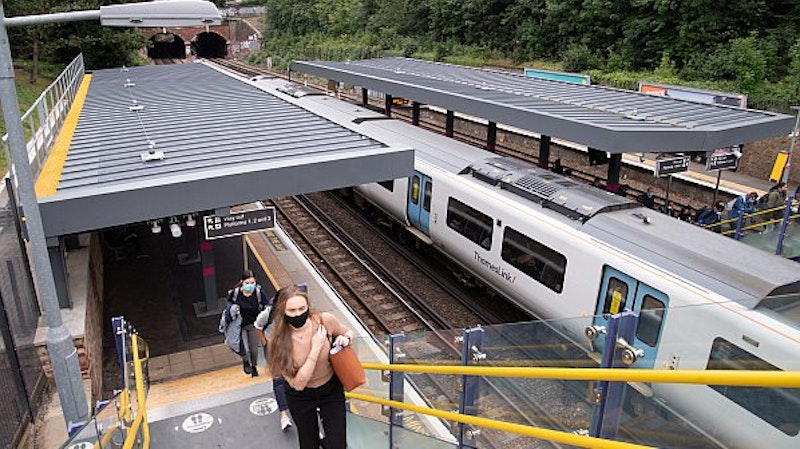 A new entrance, more comfortable waiting facilities, sheltered platforms, better lighting, a brand new 85-space cycle hub, and intriguing public art are just some of the benefits for passengers in the new £7.5m extension to Denmark Hill station in London - the first carbon positive upgrade of its kind at a station in Europe. The project was funded almost entirely by the Department of Transport and the improvements are designed to relieve station crowding which will allow for a more reliable train service to run.
The innovative design includes a new type of photovoltaic film fitted to the new roof which is able to produce more energy than the new building needs and put energy back into the electricity grid.
Another major improvement is the addition of a second entrance on Windsor Walk adjacent to the two nearby major hospitals, Kings College and the Maudsley, cutting about 200m off the everyday journeys of up to 15,000 staff and patients, (once the walking route through the Maudsley hospital reopens in 2023 following their major construction work). The listed wall on Windsor Walk has been rebuilt to its original design complete with heritage gates partly funded by The Railway Heritage Trust. For further information see the IDTechEx report on Energy Harvesting Microwatt to Gigawatt: Opportunities 2020-2040.
Rail Minister Chris Heaton Harris said: "This upgrade transforms a Victorian station into a modern experience for passengers - cutting crowding, improving access, and introducing new space for cyclists and artwork.Making this new extension to Denmark Hill the first 'carbon positive' upgrade by utilising innovative solar technology also demonstrates our ambition to ensure our rail network is greener for passengers and better for our environment."
Network Rail's Southern Region Managing Director, John Halsall, said: "The work we've done at Denmark Hill was ground-breaking in terms of upgrades to existing Victorian infrastructure in many ways, fusing the modern with the old, and above all making it accessible and user-friendly for passengers. The new upgrade is highly sustainable, using solar energy solutions that actually produce more power than the station upgrade needs to run, so we can put power back to the grid.."
A new cycle hub with secure storage for 85 bikes, funded by the two local hospitals and also by the Government's Cycle Rail Programme managed by Sustrans.
Sustainability was key to the project where an innovative new photovoltaic (solar) film has been installed on the new station roof, the rain cover over the accessible ramp and the new platform canopies, to make the upgraded parts of the station 'carbon positive', inputting energy into the Electricity Grid overall. It is the first time the film has been used at a Network Rail station in Europe and will be also used at other stations going forward.
Network Rail has worked closely in collaboration with train operating companies GTR and Great Northern to develop and design the scheme and has also worked with the Salvation Army which has provided space at its Champion Hill site for the project team, helping to minimise the impact of the works.
The new station upgrade is already receiving industry recognition and has been shortlisted for two 2021 National Rail Awards - 'Infrastructure Project of the Year' and 'Sustainable Development of the Year'.
Denmark Hill station is the first train station in Europe to have BIPVco's Flextron thin film solar technology installed. At only 3mm thick and 3kg per m2 the flexible solar panels are highly advanced from traditional 'glass like' panels and require no additional weight support. With an aesthetic finish that compliments the architectural design, the flexible panels are shatterproof and have a self-cleaning Teflon like top sheet- requiring no ongoing maintenance. The advanced technology also generates a higher energy yield in shadow and shading conditions. Denmark Hill station is a pioneer in adopting the next generation of sustainable, renewable solar power.
Source and top image: Network Rail

Very interesting. At last practical and real application. Is this a prototype? Cost effective? Will this be used for other stations or railway installations ?