Graphene Made with Lasers for Wearable Health Devices 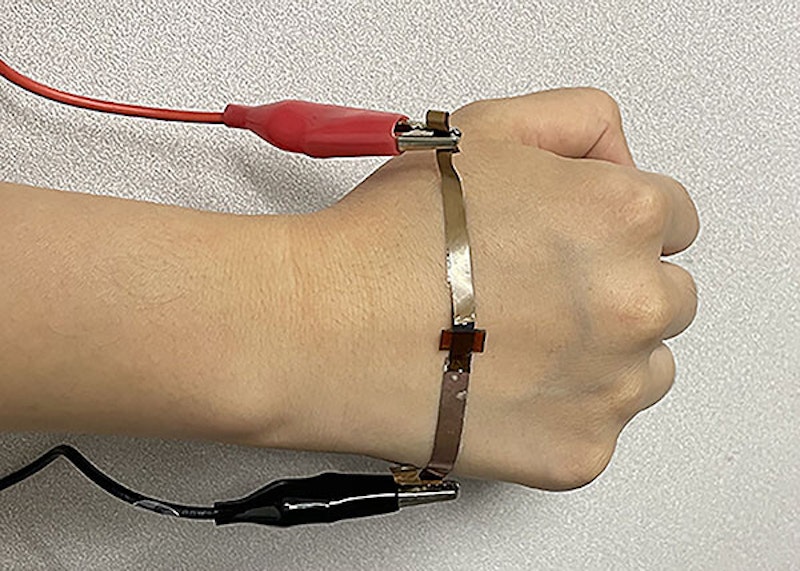 Several substances can be converted into carbon to create graphene through laser radiation. Called laser-induced graphene (LIG), the resulting product can have specific properties determined by the original material. The team tested this process and published their results in SCIENCE CHINA Technological Sciences. Samples of polyimide, a type of plastic, were irradiated through laser scanning. The researchers varied the power, scanning speed, number of passes and density of scanning lines.
"We wanted to look at how different parameters of the laser processing process create different nanostructures," Cheng said. "Varying the power allowed us to create LIG either in a fiber or foam structure."
The researchers found that lower power levels, from 7.2 watts to roughly 9 watts, resulted in the formation of a porous foam with many ultrafine layers. This LIG foam exhibited electrical conductivity and a fair resistance to heat damage — both properties that are useful in components of electronic devices.
Increasing the power from approximately 9 watts to 12.6 watts changed the LIG formation pattern from foam to bundles of small fibers. These bundles grew larger in diameter with increased laser power, while higher power promoted the web-like growth of a fiber network. The fibrous structure showed better electrical conductivity than the foam. According to Cheng, this increased performance combined with the fiber's form could open possibilities for sensing devices.
"In general, this is a conductive framework we can use to construct other components," Cheng said. "As long as the fiber is conductive, we can use it as a scaffold and do a lot of subsequent modifications on the surface to enable a number of sensors, such as a glucose sensor on the skin or an infection detector for wounds."
Varying the laser scanning speed, density and passes for the LIG formed at different powers also influenced conductivity and subsequent performance. More laser exposure resulted in higher conductivity, but eventually dropped due to excess carbonization from burning.

Using the previous study as a foundation, Cheng and the team set out to design, fabricate and test a flexible LIG pressure sensor. They reported their results in SCIENCE CHINA Technological Sciences.
"Pressure sensors are very important," Cheng said. "We can use them not only in households and manufacturing but also on the skin surface to measure lots of signals from the human body, like the pulse. They can also be used at the human-machine interface to enhance performance of prosthetic limbs or monitor their attachment points."
The team tested two designs. For the first, they sandwiched a thin LIG foam layer between two polyimide layers containing copper electrodes. When pressure was applied, the LIG generated electricity. The voids in the foam reduced the number of pathways for electricity to travel, making it easier to localize the pressure source, and appeared to improve sensitivity to delicate touches.
This first design, when attached to the back of the hand or the finger, detected bending and stretching hand movements — as well as the characteristic percussion, tidal and diastolic waves of the heartbeat. According to Cheng, this pulse reading could be combined with an electrocardiogram reading to yield blood pressure measurements without a cuff. In the second design, the researchers incorporated nanoparticles into the LIG foam. These tiny spheres of molybdenum disulfide, a semiconductor that can act as a conductor and an insulator, enhanced the foam's sensitivity and resistance to physical forces. This design was also resilient to repeated use, showing nearly identical performance before and after nearly 10,000 uses.
Both designs were cost-effective and allowed for simple data acquisition, according to Cheng. The researchers plan to continue exploring the designs as standalone devices for health monitoring or in tandem with other extant equipment.
Source and top image: University of Pennsylvania