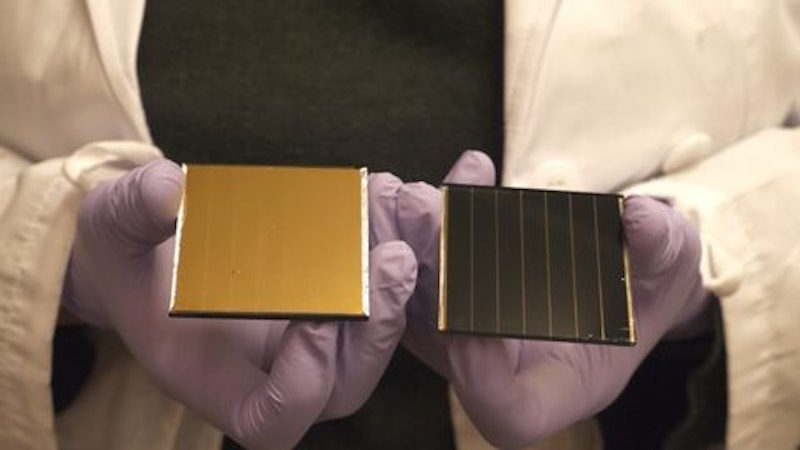 A team of researchers led by Professor Yabing Qi in the Energy Materials and Surface Sciences Unit at the Okinawa Institute of Science and Technology Graduate University (OIST) in Japan have imaged the atoms at the surface of the light-absorbing layer in a new type of next-generation solar cells, made from a crystal material called metal-halide perovskite. Their findings, reported in the journal Energy & Environmental Science, have solved a long-standing mystery in the field of solar power technology, showing how power-boosting and stability-enhancing chlorine is incorporated into the perovskite material.
In a world now fueled by a need for clean, green energy, solar power is a vital route forward out of the climate crisis. And metal-halide perovskites are the up-and-coming material that many researchers hope one day will eclipse or complement the silicon solar cells currently dominating the market. For further information see the IDTechEx report on Perovskite Photovoltaics 2018-2028.
"Perovskites have the potential to be cheaper, more efficient and more versatile than silicon," said first author Dr. Afshan Jamshaid, a former PhD student in the OIST Energy Materials and Surface Sciences Unit. But currently, perovskite solar cells suffer from issues with efficiency, up-scaling and stability, holding them back from commercialization. High temperatures, humidity and UV light can degrade the perovskite material, reducing how well it can convert light energy to power, Dr. Jamshaid explained.
Over the last decade, researchers have been intensely focused on tackling these issues. One way of improving perovskite solar cells has been through using dopants - small traces of another chemical that are added during the process of making the perovskite crystal layer. Dopants change the physical and chemical properties of the material, boosting the stability and efficiency of the solar device. One such dopant is chlorine, which has been shown to increase the lifespan of perovskite solar cells and enhance their power conversion efficiency. But until now, how this dopant worked was a puzzle.
"The research community had no idea why they were seeing these improvements. Once added, the researchers couldn't track the chlorine - they couldn't tell whether the chlorine was incorporated deep into the perovskite material, stayed at the surface or even left the material during the manufacturing process," said Dr. Jamshaid. "Around 50% of the community believed the chlorine was present, but the other 50% of the community didn't."
In the study, the research group finally settled the debate by creating thin films of the metal-halide perovskite, methylammonium lead iodide, which were doped with chlorine. They used cutting-edge scanning tunneling microscopy to image the surface of the perovskite layer.
"It was only through zooming in down to the atomic level that we were finally able to detect that the chlorine really was there, just at a very low concentration," said Dr. Jamshaid.
The team found that there were dark depressions on the surface that weren't seen in the pure methylammonium lead iodide perovskite films. Through theoretical calculations performed by the collaborators Professor Wanjian Yin and Dr. Zhendong Guo at Soochow University in China, the researchers concluded that these dark depressions signify where chlorine, which is smaller in size, has replaced the loosely-bound iodine within the perovskite crystal structure. The research group also noticed that more of these dark indentations occurred around grain boundaries in the perovskite film.
The perovskite layer isn't a uniform crystal lattice, but instead is made up of many different crystal grains. It is due to these cracks between grains, called grain boundaries, that perovskite is inherently so unstable.
"Most degradation from UV light, temperature or moisture occurs at these grain-boundaries, as the ions here are much more loosely-bound," said Dr. Jamshaid.
The team suspect that the increased presence of chlorine around these grain boundaries may account for the added stability and efficiency of the material, by reducing the number of defects on the surface. Importantly, the researchers found that when they varied the concentration of chlorine within the perovskite film by altering the length of time that the chlorine was deposited, the surface structure and electronic properties of the material also changed.
At the shortest deposition time, the team couldn't detect any chlorine on the surface of the perovskite material. And at the longest deposition time, the chlorine formed an additional layer of ions on top of the perovskite that drastically changed the electronic properties. The researchers were able to work out an intermediate deposition time that hit the sweet spot - delivering an optimal concentration of chlorine - around 14.8% - on the surface. This concentration gave the perovskite material high stability. The next step for the research team is to manufacture a complete solar cell that contains a perovskite layer doped with this optimal concentration of chlorine.
"That's why fundamental studies like these are so important - they help device engineers pin down the most optimal manufacturing process without as much trial and error," said Dr. Jamshaid. "By understanding how the dopants improve the material, it can also guide us towards new chemical mixes that might work even better."
Source and top image: Okinawa Institute of Science and Technology