A University of Southern California team has produced flexible transparent carbon atom films that the researchers say have great potential for a new breed of solar cells.
"Organic photovoltaic (OPV) cells have been proposed as a means to achieve low cost energy due to their ease of manufacture, light weight, and compatibility with flexible substrates," wrote Chongwu Zhou, a professor of electrical engineering in the USC Viterbi School of Engineering, in a paper recently published in the journal ACS Nano.
The technique described in the article describes progress toward a novel OPV cell design that has significant advantages, particularly in the area of physical flexibility.
A critical aspect of any OPV photo-electronic device is a transparent conductive electrode through which light can couple with active materials to create electricity. The new work indicates that graphene, a highly conductive and highly transparent form of carbon made up of atoms-thick sheets of carbon atoms, has high potential to fill this role.
While graphene's existence has been known for decades, it has only been studied extensively since 2004 because of the difficulty of manufacturing it in high quality and in quantity.
The Zhou lab reported the large scale production of graphene films by chemical vapor deposition three years ago. In this process, the USC engineering team creates ultra thin graphene sheets by first depositing carbon atoms in the form of graphene films on a nickel plate from methane gas.
Then they lay down a protective layer of thermo plastic over the graphene layer, and then dissolve the nickel underneath in an acid bath. In the final step they attach the plastic-protected graphene to a very flexible polymer sheet, which can then be incorporated into a OPV cell.(see diagram)
The USC team has produced graphene/polymer sheets ranging in sizes up to 150 square centimeters that in turn can be used to create dense arrays of flexible OPV cells.
These OPV devices convert solar radiation to electricity, but not as efficiently as silicon cells. The power provided by sunlight on a sunny day is about 1000 watts per meter square. "For every 1000 watts of sunlight that hits a one square meter area of the standard silicon solar cell, 14 watts of electricity will be generated," says Lewis Gomez De Arco, a doctoral student and a member of the team that built the graphene OPVs. "Organic solar cells are less efficient; their conversion rate for that same one thousand watts of sunlight in the graphene-based solar cell would be only 1.3 watts."
But what graphene OPVs lack in efficiency, they can potentially more than make for in lower price and, greater physical flexibility. Gomez De Arco thinks that it may eventually be possible to run printing presses laying extensive areas covered with inexpensive solar cells, much like newspaper presses print newspapers.
"They could be hung as curtains in homes or even made into fabric and be worn as power generating clothing, I imagine people charging their cellular phone or music/video device while jogging in the sun," he said.
Graphene marks a major advance over another OPV design, one based on Indium-Tin-Oxide (ITO) in at least one crucial area. In the USC team's test of ITO based solar cells and graphene based cells, the ITO cells failed at a very small angle of bending, while the graphene based cells remained operational and sustained repeated bending with more than twice the stress angle of the ITO solar cells. This would give the graphene solar cells a decided advantage in some uses, including the printed-on-fabric applications proposed by Gomez de Arco.
The USC researchers say graphene OPVs would be major advance in at least one crucial area over a rival OPV design, one based on Indium-Tin-Oxide (ITO). In the USC team's tests, ITO cells failed at a very small angle of bending, while the graphene-based cells remained operational after repeated bending at much larger stress angles. This would give the graphene solar cells a decided advantage in some uses, including the printed-on-fabric applications proposed by the USC team.
Zhou and the other researchers on the USC team - which included Yi Zhang, Cody W. Schlenker, Koungmin Ryu, and Mark E. Thompson in addition to Gomez de Arco — are excited by the potential for this technology.
Their paper concludes that their approach constitutes a significant advance toward the production of transparent conductive electrodes in solar cells. "CVD graphene meets the most important criteria of abundance, low cost, conductivity, stability, electrode/organic film compatibility, and flexibility that are necessary to replace ITO in organic photovoltaics, which may have important implications for future organic optoelectronic devices." 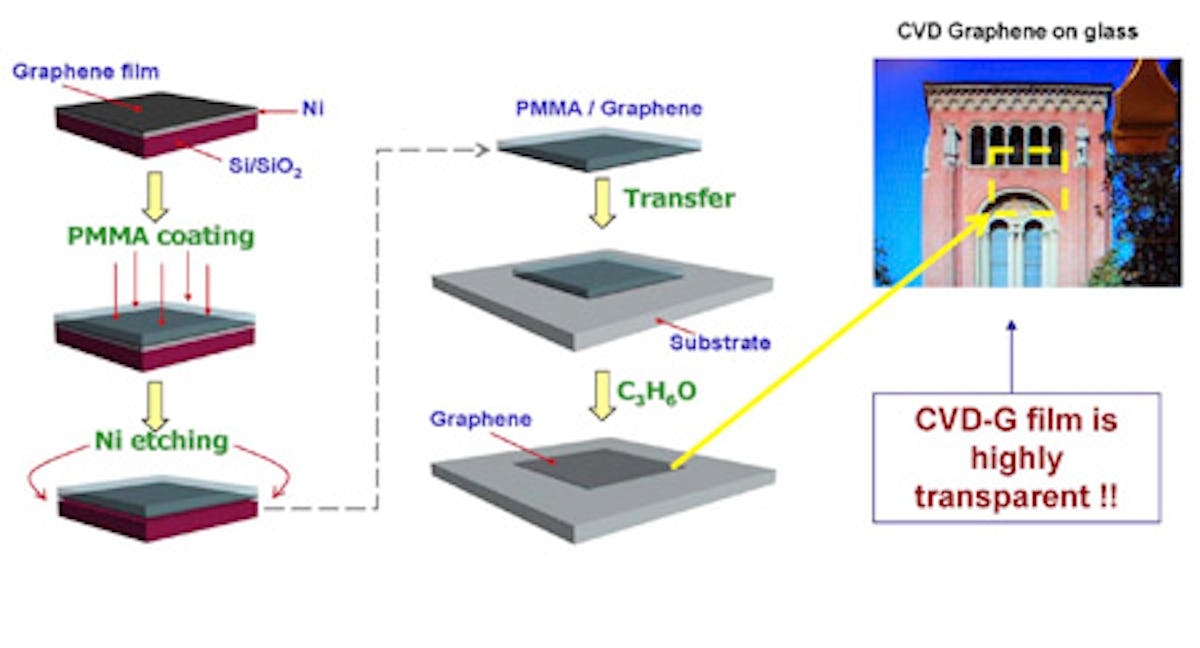 The process. The resulting film is photographed atop a color photo to show its transparency
Top image: Flexible Fueler: a graphene film like this can be part of extremely thin and bendable solar cells that might be printed on cloth
For more attend: Printed Electronics and Photovoltaics USA 2010.
Source: University of Southern California