QinetiQ's Zephyr, a solar powered high-altitude long endurance (HALE) unmanned aircraft, has completed two weeks of non-stop flight above a US Army range in Arizona. Zephyr was launched on July 9th and after being aloft for 14 nights continuously, achieved the objective of the trial and set a number of performance and altitude records according to QinetiQ.
An official from the Federation Aeronautique Internationale (FAI), the world air sports federation, monitored progress at the Yuma Proving Ground and should now be able to confirm a number of new world records. These include quadrupling its own unofficial world record for longest duration unmanned flight (82 hours, 37 minutes set in 2008) and surpassing the current official world record for the longest flight for an unmanned air system (set at 30 hours 24 minutes by Northrop Grumman's RQ-4A Global Hawk on 22 March 2001). Zephyr will also have flown longer, non-stop and without refueling, than any other aeroplane - having significantly passed the Rutan Voyager milestone of 9 days (216hours) 3 minutes and 44 seconds airborne, set in December 1986.
"Zephyr is the world's first and only truly persistent aeroplane," said Neville Salkeld, MD of QinetiQ's UK Technology Solutions Group. "We are really proud of the team's achievement which has been supported by expertise from across the QinetiQ business and beyond. We've now proved that this amazing aircraft is capable of providing a cost effective, persistent surveillance and communications capability measured in terms of weeks, if not months. Not only is Zephyr game-changing technology, it is also significantly more cost effective to manufacture and deploy than traditional aircraft and satellites."
Easy to transport in a standard road transport container, once launched Zephyr can remain above a general area for weeks, if not months, at a time delivering vital capability at a fraction of the cost of satellites and significantly more cost effectively than other 'conventionally powered' manned or unmanned aircraft. Zephyr also does not need to return to base at regular intervals for re-fuelling or servicing which helps minimise the logistical supply chain, extending its operational capability and appeal. Its zero emissions also make it exceptionally environmentally friendly.
For the trial in Yuma Zephyr carried a communications payload configured to meet the needs of the UK Ministry of Defence. In addition to the obvious defence and security applications, commercial uses include environmental research; monitoring crops and pollution; providing tactical intelligence over disaster zones or forest fires; plus delivering mobile communications capabilities in remote areas. 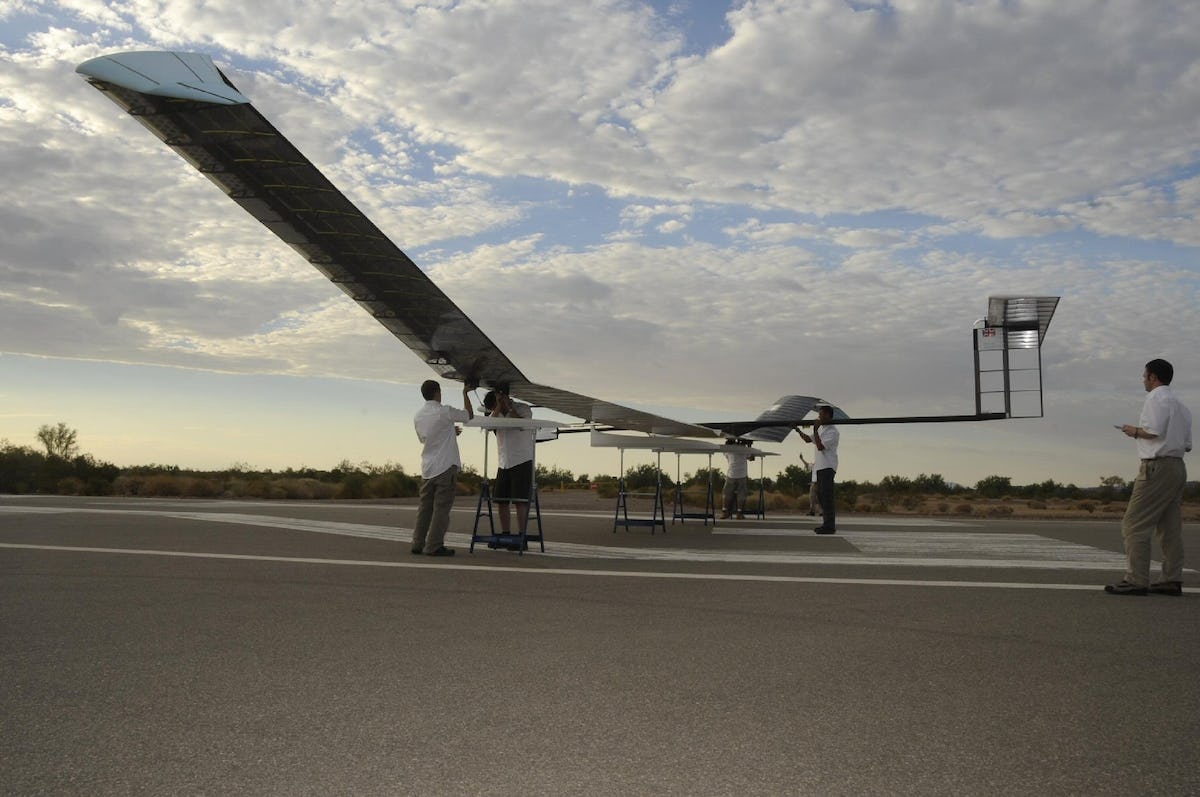 Chris Kelleher, QinetiQ's chief designer said: "We have designed, built and delivered what will be remembered as a milestone in aviation history. Zephyr will transform the delivery of current services such as communications, and lead to many new applications which are not possible or affordable by other means. We've also had to design for temperatures of around plus 40ºC on the ground to below minus 75ºC at altitude, ever changing weather systems including storms and high winds - and Zephyr took them all in its stride. It is a truly fantastic achievement."
Launched by hand, the aircraft flies by day on solar power delivered by amorphous silicon solar arrays, supplied by Uni-Solar, no thicker than sheets of paper that cover the aircraft's wings. These are also used to recharge the lithium-sulphur batteries, supplied by Sion Power Inc, which are used to power the aircraft by night. Oxis Energy is another supplier of such traction batteries. Together they provide an extremely high power to weight ratio on a continuous day/night cycle, thereby delivering persistent on station capabilities.
Around 50% larger than the previous version, Zephyr incorporates an entirely new wing design with a total wingspan of 22.5m to accommodate more batteries that are combined with a totally new integrated power management system. The entirely new aerodynamic shape also helps to reduce drag and improve performance. Zephyr's ultra-lightweight carbon fibre design means it weighs in at just over 50Kg.
Source and images: QinetiQ
IDTechEx notes that similar solar power will help to top up the lithium batteries in manned aircraft such as the new sports plane from PC-Aero that is pure electric.
For more read : Energy Harvesting and Storage for Electronic Devices 2010-2020
and attend Energy Harvesting & Storage and Wireless Networks & RTLS USA 2010