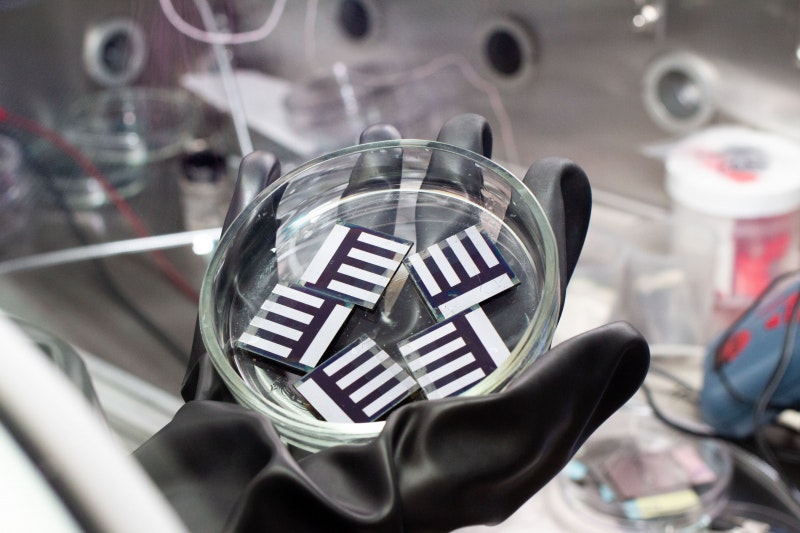 An international team of researchers from ITMO's School of Physics and Engineering and Tor Vergata University of Rome found a way to increase the efficiency of perovskite-based solar cells. The project was supported by a Russian Science Foundation grant and its results were described in a paper published in Nano Energy.
The researchers developed a paste made from titanium dioxide and resonant silicon nanoparticles that serves as an additional layer in the process of producing solar cells. The Mie-resonant particles in the paste make it possible to control the amount of light absorbed and increase the generation of photocurrent, which allowed the researchers to bring the efficiency of solar cells up to 21%. Importantly, the experiments were conducted on halide (MAPbI3) perovskites, which are the most widespread and well-studied in the field of photovoltaics.

Halide perovskites are some of the most promising materials in contemporary photovoltaics, however they have one significant drawback: their photoactive layer is only about 300-600 nanometers. Such thin layers cannot absorb all the incoming light, but at the same time they can't be made thicker - then, the light will be dispersed more actively causing energy losses. For further information see the IDTechEx repoerton Perovskite Photovoltaics 2018-2028.
One of two strategies can be used to boost the efficiency of perovskite-based solar cells: improving the charge collection or increasing light absorption. The first strategy requires using more complex perovskite compositions and introducing additional substances (usually, rare metals), as well as generally increasing the complexity of the structure. Naturally, this leads to an increase in production expenses. Researchers from ITMO University together with colleagues from Tor Vergata University went around this problem by increasing the concentration of light inside solar cells. Moreover, their solution uses silicon, one of the elements most accessible in nature.
"We can obtain silicon from sand, so there is almost an endless supply of this material. It would've been a strange solution to simply introduce silicon into the perovskite structure, but it could be introduced as a nanoparticle. Such particles serve as nanoantennae - they catch light and it resonates inside them. And the longer light stays in the photoactive layer, the more of it is absorbed by the material," explains Sergey Makarov, professor at ITMO's School of Physics and Engineering.

The trick is that silicon nanoparticles of specific sizes are Mie-resonant. Thanks to this effect, the nanoparticles can amplify various optical phenomena, including light absorption and spontaneous radiation. In other words, they do work as nanoantennae. However, in order to make use of this property, the researchers had to conduct serious theoretical calculations and build a model that accounted for electrophysical and optical properties of all layers and nanoparticles when they are subjected to external radiation and voltage.
The second crucial and complex task of the project was identifying the best location for the developed paste. Solar cells are produced using the spin coating method, when liquid layers are sequentially applied on each other. This makes it possible to create thin films of controllably varying thickness and concentration. Moreover, practically any additional materials and substances can be added to films during such production.
"With liquid methods we can easily portion out the amount of dry nanoparticles in a solution. What we had to decide was in which layer we should place the Mie-resonant particles. If put in the perovskite layer, they would damage its photoactive regions. If they were to be put in the upper transport layer, the light would mostly have been absorbed by the time it reached the nanoparticles through all of the layers below them. That's why we placed the nanoparticles in the next layer after the perovskite - this way they are closer to the light source and work as antennae more efficiently," says Aleksandra Furasova, first author of the paper and a junior research associate at ITMO's School of Physics and Engineering.

The developed paste is simple to apply and can be used with solar cells of any composition and configuration. At the same time, there are no additional complications to the production process, while the cost of the resulting devices increases by only 0.3%.
"The paste can be easily applied with other methods, not only with spin coating. It's a raw universal product that can be used in other types of solar cells, as well as in the production of various devices - photodetectors, harvesters, and optoelectronics. Such production is also environmentally-friendly, as we don't use any rare materials. As a result, we have developed quite a technological solution and we believe the product will be universally applicable and sought-after," concludes Sergey Makarov.
Source and top image: ITMO University