Rethinking Smart Cities: Setbacks and How to Move Forward 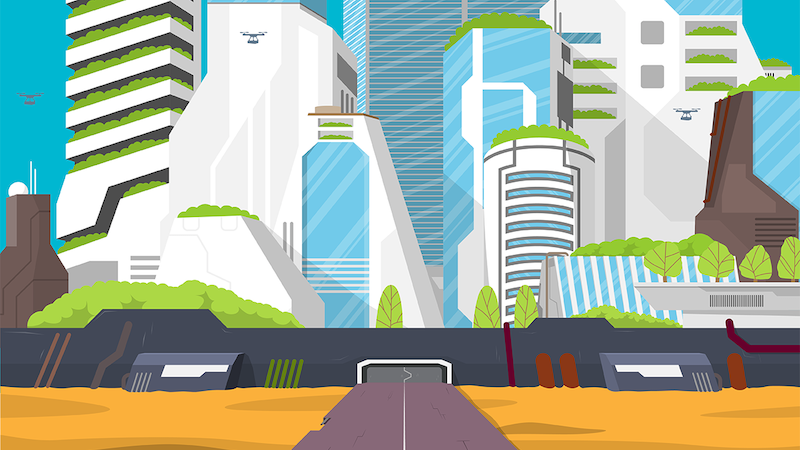 Bill Gates backed a Belmont smart city in the Arizona desert - little has happened beyond a land purchase. Authorities demand that the Colorado river's diminishing water supply is unharmed. Arizona suffers historic water shortage. The Southwest and much of the West is suffering from an intense 22-year drought, resulting in increasingly low water levels, dry soil, and dry vegetation-fueled wildfires. Reservoirs supplying from the Colorado River are at historic low record levels and estimates are even being made for when that river is no more.
Nonetheless, how to make smart cities in both deserts and the sea must be figured out. IDTechEx provide further insights in their recent report, "Smart Cities Market 2021-2041: Energy, Food, Water, Materials, Transportation Forecasts".
On the other side of the world, water is not the problem, with the planned Forest City Malaysia to be reclaimed from the sea and enjoy independence in drinking water and zero-emission energy. There the problem is that recent resistance to China threatens the source of finance - China. In India, there is a dry laugh about heroic new smart city plans that, years later, result in very little on the ground.
The good news is that ideas have certainly moved on from a smart city being a dystopian world of sensors everywhere and people control by artificial intelligence. A planned smart city in part of Toronto collapsed in the face of robust objection to such secret data gathering and use. Smart cities are primarily about progressing to water, food, and power independence and minimal transport. Many seek 100% electrification off-grid.
Most of the largest existing cities are near the sea or major rivers and are threatened by rising sea levels - so the rapid progress with open-water tidal and wave power is significant, as is the plummeting cost of solar. Delightfully, there are now many ways of not only covering solar being dead at night but many viable approaches to a new need - storing huge amounts of electricity seasonally because solar is feeble in winter. The IDTechEx report, "Stationary Energy Storage Without Batteries: Grid, Microgrid, UPS, Trackside 2021-2041" has the details.
Then there is the positive face of smart city projects. Saudi Arabia is consistently pursuing its linear smart city across the desert in its NEOM scheme. The budget of half a trillion dollars has no need for Chinese finance. Food independence has increased credibility with not just meat but milk being grown indoors from animal cells. Indoor hydroponics and its extension to edible fish, not just vegetables, is called aquaponics, another part of the answer. See the IDTechEx reports, "Cultured Meat 2021-2041: Technologies, Markets, Forecasts" and "Plant-Based Meat 2021-2031" for more information on this growing trend.
Add to that the remarkable progress with saline agriculture in the Middle East (think rising sea levels) and at the other extreme of food from deserts. Nanoracks, expert in food creation in space, has just set up a spinoff in the United Arab Emirates called StarLab Oasis, supported by its government. The UAE imports 90% of its food but this business will "grow plants more efficiently in deserts and in space because of the available energy."
With global warming, by the year 2100, two thirds of the world's population will be forced to survive in arid regions. 3D printing of affordable houses using desert sand is being demonstrated - even useful for planned smart cities on the Moon and Mars. IDTechEx have released a new report, "Concrete and Cement Reinvented: Growing the Market, Decarbonising 2022-2042" with more information.
Let us end by going full circle back to the widening deserts of the USA. Billionaire Marc Lore now plans Telosa. This 150,000-acre sustainable metropolis would be in an American desert with eco-friendly architecture, zero-emission energy independence and a drought-resistant water system. A so-called "15-minute city design" will allow residents to access their workplaces, schools, and amenities within a quarter-hour commute of their homes. Many projects now seek that - ban private cars, use multipurpose robot shuttles that even take the disabled inside buildings and across plazas, maybe free of charge, inclusiveness being a key requirement. Expect 100% city electrification of course.
The modest Toyota Woven City at the foot of Mount Fuji is slowly progressing and symmetrical robot shuttles that never have to do a U turn are being deployed there and these are already seen worldwide, though not yet fully autonomous. Air taxis are also in the mix.
It is a small world. Danish architect Bjarke Ingels is involved in both Telosa USA and Woven City Japan, covered in the IDTechEx reports, "Robot Shuttles for Smart Cities 2021-2041" and "Manned Electric Aircraft: Smart City and Regional 2021-2041".
Now, Marc Lore needs somewhere to build his large version, along with $400 billion in funding that he plans to get from many sources. He says his possible targets include Nevada, Utah, Idaho, Arizona, Texas and the Appalachian region. Smart cities are not discredited. They are essential but still require twists and turns to get there.
IDTechEx guides your strategic business decisions through its Research, Subscription and Consultancy products, helping you profit from emerging technologies. For more information, contact research@IDTechEx.com or visit www.IDTechEx.com.