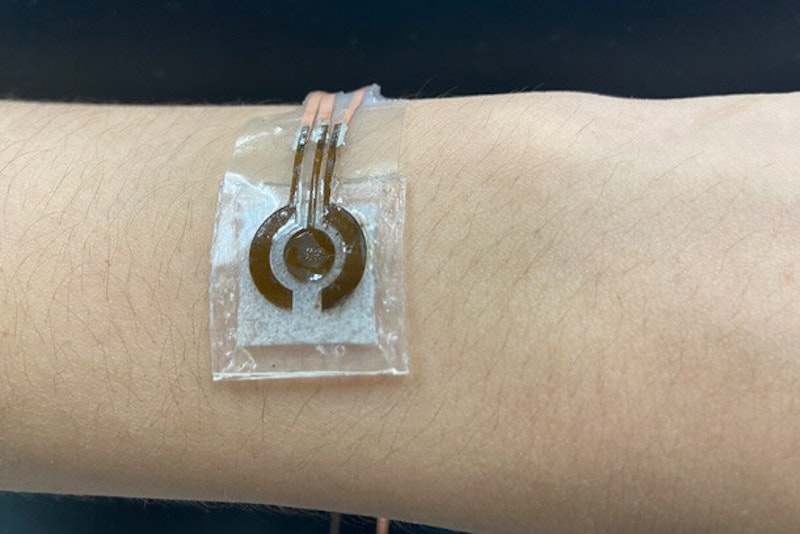 Noninvasive glucose monitoring devices are not currently commercially available in the United States, so people with diabetes must collect blood samples or use sensors embedded under the skin to measure their blood sugar levels. Now, with a new wearable device created by Penn State researchers, less intrusive glucose monitoring could become the norm.
Led by Huanyu "Larry" Cheng, Dorothy Quiggle Career Development Professor in Penn State's Department of Engineering Science and Mechanics, the researchers published the details of the noninvasive, low-cost sensor that can detect glucose in sweat in Biosensors and Bioelectronics. The paper, available online, will publish in the journal's December print issue.
The researchers constructed the device first with laser-induced graphene (LIG), a material consisting of atom-thick carbon layers in various shapes. With high electrical conductivity and a convenient fabrication time of just seconds, LIG appeared to be an ideal framework for the sensing device — but there was a significant caveat. For further information see the IDTechEx report on Technologies for Diabetes Management 2019-2029: Technology, Players and Forecasts.
"The challenge here is that LIG is not sensitive to glucose at all," Cheng said. "So, we needed to deposit a glucose-sensitive material onto the LIG."
The team chose nickel because of its robust glucose sensitivity, according to Cheng, and combined it with gold to lower potential risks of an allergic reaction. The researchers hypothesized that the LIG outfitted with the nickel-gold alloy would be able to detect low concentrations of glucose in sweat on the skin's surface.
A material with high glucose sensitivity was a priority. Sweat exhibits remarkably low glucose concentrations compared to blood — but, according to Cheng, there is a strong correlation between glucose levels in sweat and blood. While the concentration of glucose in sweat is about 100 times less than the concentration in blood, the team's device is sensitive enough to accurately measure the glucose in sweat and reflect the concentration in blood. The nickel-gold alloy's sensitivity allowed Cheng's team to exclude enzymes, which are often used to measure glucose in more invasive, commercially available devices or in noninvasive monitors proposed by other researchers. These enzymes, however, can degrade quickly with time and changing temperatures.
"An enzymatic sensor has to be kept at a certain temperature and pH, and the enzyme can't be stored in the long term," Cheng said. "A nonenzymatic glucose sensor, on the other hand, is advantageous in terms of stable performance and glucose sensitivity regardless of these changes."
Nonenzymatic sensors require alkaline solution, which can damage the skin and typically limits device wearability. To curb this issue, Cheng and his team attached a microfluidic chamber to the LIG alloy. This chamber is smaller than previously developed configurations to promote wearability and porous to allow for a range of movement, such as stretching or crushing. It is connected to a collection inlet that passes sweat into the solution without allowing the solution to touch the skin. The basic solution interacts with the glucose molecules to produce a compound that reacts with the alloy. This reaction triggers an electrical signal, indicating the concentration of glucose in the sweat.
With a smaller alkaline solution chamber, the entire device is roughly the size of a quarter and is flexible enough to maintain a secure attachment to the human body, Cheng said.
In a proof-of-concept test, the researchers used a skin-safe adhesive to attach the reusable device to a person's arm one hour and three hours after a meal. The subject performed a brief workout — just enough to produce sweat — right before each measurement time. A few minutes after collecting the sweat, the researchers found that the detected glucose concentration dropped from the first measurement to the next. The glucose measurements from the device were verified by measurements made with a commercially available glucose monitor.
Cheng and the team plan to improve upon their prototype for future applications, including addressing how patients or clinicians may use the sensor for incremental glucose measurements or continuous monitoring to determine treatment actions, such as administering insulin. They also intend to refine and expand this platform for more comfortable monitoring of other biomarkers that can be found in the sweat or interstitial fluids that fill the space between cells in the body.
"We want to work with physicians and other health care providers to see how we can apply this technology for daily monitoring of a patient," Cheng said. "This glucose sensor serves as a foundational example to show that we can improve the detection of biomarkers in sweat at extremely low concentrations."
Source and top image: Penn State University

There are 4 comments for this article

Fantastic work by the Penn State team - I'd love to help develop this technology - both as a product developer, physicist and a T1D.

Removing the needle and blood from the process is a great innovation. I believe that it will be very successful if it is correlated with the current method. It is an admirable solution.

This is an amazing step forward regarding different aspects: patient safety (less risk of infects), patient comfort - and cost. This device will be affordable to many people!

For diabetic patients it will be most useful device. Hope it will come soon to the people.