Batteries of the Future Could be Paper-Thin and Biodegradable 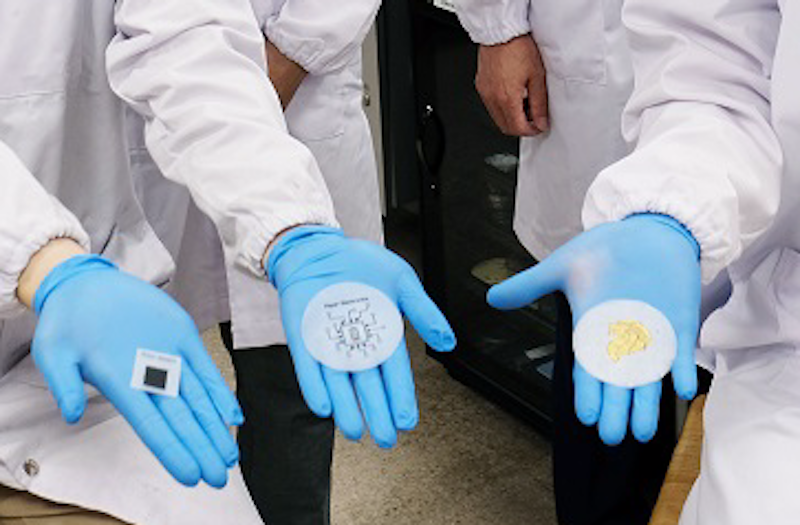 Scientists from Nanyang Technological University, Singapore (NTU Singapore) have developed paper-thin biodegradable zinc batteries that could one day become an environmentally sustainable option for powering flexible and wearable electronic systems.
The NTU Singapore-developed zinc batteries are made up of electrodes (through which the electrical current leaves or enters the battery) screen-printed on to both sides of a piece of cellulose paper that has been reinforced with hydrogel. Once the battery has been expended, it can be buried in soil, where it breaks down completely within a month.
In a proof-of-concept experiment described in scientific journal Advanced Science, the NTU team demonstrated how a 4cm x 4cm square of printed paper battery could power a small electric fan for at least 45 minutes. Bending or twisting the battery did not interrupt the power supply. In another experiment using a 4cm x 4cm battery to power an LED, the scientists showed that despite cutting away parts of the paper battery, the LED remained lit, indicating that cutting does not affect the functionality of the battery. For further information see the IDTechEx report on Flexible, Printed and Thin Film Batteries 2020-2030: Technologies, Markets and Players
The scientists think their printed battery could be integrated into flexible electronics such as foldable smart phones that are already on the market, or biomedical sensors for health monitoring.
Professor Fan Hongjin from the NTU School of Physical and Mathematical Sciences and the study's co-lead author, said: "Traditional batteries come in a variety of models and sizes, and choosing the right type for your device could be a cumbersome process. Through our study, we showed a simpler, cheaper way of manufacturing batteries, by developing a single large piece of battery that can be cut to desired shapes and sizes without loss of efficiency. These features make our paper batteries ideal for integration in the sorts of flexible electronics that are gradually being developed."
Assistant Professor Lee Seok Woo from the NTU School of Electrical and Electronic Engineering and the study's co-lead author, said: "We believe the paper battery we have developed could potentially help with the electronic waste problem, given that our printed paper battery is non-toxic and does not require aluminium or plastic casings to encapsulate the battery components. Avoiding the packaging layers also enables our battery to store a higher amount of energy, and thus power, within a smaller system."
The development of printed paper zinc batteries by the NTU research team, which also includes research fellows Dr Yang Peihua and Dr Li Jia, is in line with the NTU 2025 vision and the University's Sustainability Manifesto, which aspire to develop sustainable solutions to address some of humanity's pressing grand challenges.

Batteries power devices through an electrochemical reaction, which produces electrical energy. The internal workings of a battery are usually housed within a metal or plastic case. Inside this case are the cathode and anode - these are electrodes where the electrochemical reactions occur. A separator added between the cathode and anode creates a barrier and prevents the electrodes from touching while allowing electrical charge to flow freely between them, avoiding short circuits. Also inside the battery is a medium known as the electrolyte, which allows the electric charge to flow between the cathode and anode.
To develop a thinner, lighter prototype with no packaging required, the NTU scientists adopted a "sandwich design" for their batteries - the electrodes are like the bread slices, and the cellulose paper that the electrodes are printed on is like the sandwich filling. The fabrication process starts with reinforcing cellulose paper with hydrogel to fill up the fibre gaps found naturally in cellulose. This forms a dense separator that effectively prevents the mixing of the electrodes, which are formulated as 'electrode inks' and screen-printed onto both sides of the hydrogel-reinforced cellulose paper.
The anode ink is mainly made up of zinc and carbon black (a conductive type of carbon). As for the cathode ink, the scientists developed one type with manganese and another with nickel as a proof-of-concept, though the research team said that other metals could possibly be used. After the electrodes are printed, the battery is immersed in an electrolyte. A layer of gold thin foil is then coated on the electrodes to increase the conductivity of the battery. The final product is about 0.4mm thick - about the thickness of two strands of human hair.

With hydrogel and cellulose naturally broken down by bacteria, fungi, and other microorganisms, the battery can simply be buried in soil at the end of its life span where it breaks down in a matter of weeks, making it a fully biodegradable product. To demonstrate the paper battery's biodegradability, the NTU scientists buried it in the soil of a rooftop garden on the NTU campus. The hydrogel-reinforced cellulose paper started fracturing after two weeks, and degraded completely within a month.
Prof Fan said: "When decomposition happens, the electrode materials are released into the environment. The nickel or manganese used in the cathodes will remain in their oxide or hydroxide forms, which are close to the form of natural minerals. The zinc found in the anode will be naturally oxidised to form a non-toxic hydroxide. This points to the battery's potential as a more sustainable alternative to current batteries."
Going forward, the NTU team hopes to demonstrate the complete integration of the printed paper battery to other printed electronics, electronic skins, as well as energy storage systems deployed in the environment.
Source and top image: Nanyang Technological University