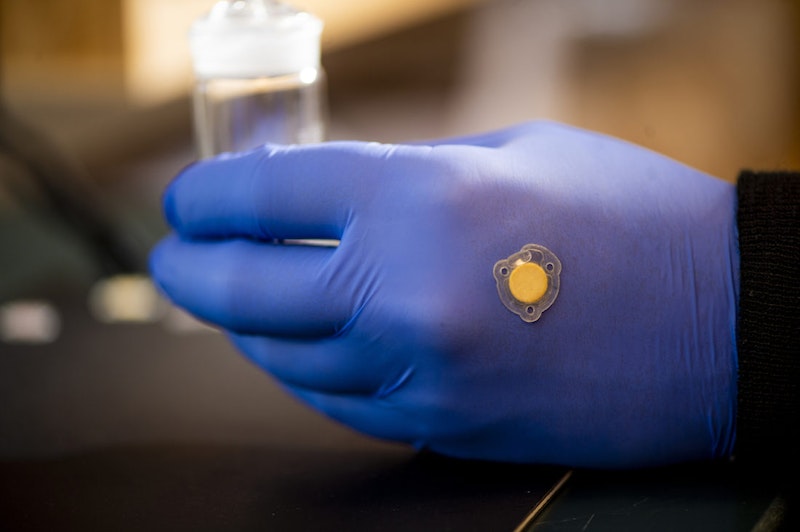 A team of Northeastern scientists is using the chemistry of squid skin to create a wearable device that senses damaging levels of UV radiation
"When we noticed it changed color in light, we were super annoyed," says Leila Deravi, assistant professor of chemistry and chemical biology at Northeastern. That meant the substance wasn't stable enough for the applications Deravi had in mind.
But the disappointment was short-lived, as Dan Wilson, a research scientist at Northeastern's Kostas Research Institute, quickly realized that the outcome could be turned into a feature rather than a bug. Wilson built on the unwanted chemical reaction to create dime-sized devices that change color when they've been exposed to a damaging amount of ultraviolet radiation, helping people prevent cancer-causing skin damage. The invention is essentially a tiny sticker that people could place on a shirt, hat, or bathing suit when they're headed outside. For further information see the IDTechEx report on Wearable Sensors 2021-2031.
"We all know more or less that too much sun on a high-UV-index day is bad. But we don't necessarily know how that translates to time in the sun," Wilson says. "This is meant to provide a visual, qualitative indication of when you may have been in the sun for too long and you should consider spending some time in the shade or reapplying your sunscreen."
The development of this device started not with humans, but with squid. At the time, Wilson was a postdoctoral research associate in Deravi's Biomaterials Design Group. The team studies how cephalopods—tentacled sea creatures such as octopus, squid, and cuttlefish—camouflage themselves to blend into their environment. With a particular focus on squid, the researchers have identified and isolated many mechanisms, pigments, and chemical reactions that enable the animals to alter their appearances with ease.
When the circuitous discovery occurred, Wilson was testing one substance critical to squid's color-changing capabilities: a pigment called xanthommatin. The small molecule gives squid skin its visible color.
Deravi's team had already found that xanthommatin could be manipulated to change color, and she hoped that it might be something that could be integrated into materials for a variety of applications such as apparel, or other consumer products. But in order for that to be possible, she says, xanthommatin would need to be stable and controllable in many environments.
So when Wilson noticed that xanthommatin would change color when left out on the lab bench in ambient natural light, Deravi was initially disappointed. But Wilson saw this revelation as an opportunity. If the substance reacts to the ultraviolet radiation that is sunlight, then it could be used as a sensor for exactly that. And he had just the method in mind.
In graduate school, Wilson studied paper-based microfluidics. He leveraged that knowledge to build a system that dyes tiny pieces of paper with the xanthommatin pigment and activates it with the press of a button.
The wearable device is about the size of the tip of one of Wilson's fingers. It's made of five thin layers of carefully crafted sheets of plastic, and a round piece of paper that has been treated with the pigment and dried out. The sensor is activated when a user presses on the "button," a small reservoir of fluid in the edge of the device. That pressure pushes the fluid through channels cut into a middle layer of plastic in order to hydrate the treated paper. Once it's wet, it will react under UV radiation, changing from a yellow/orange color to a red the more it has been exposed.
The plastic itself is mostly made of the same material used for a transparent sheet for an overhead projector. There's a simple base layer, then the channel layer, topped with a layer to seal off all of the channels except for a small hole at the middle out of which the fluid flows. The fourth layer is a spacer, with a wide hole cut into it into which Wilson carefully places the paper sensor using long, thin tweezers. The sensor layer is topped with a thin film of plastic typically used in the walls or roof of a greenhouse. Wilson selected this material because it lets through as much sunlight as possible.
Wilson tested the device under many conditions, described in a paper published this month in the journal ACS Sensors, and calibrated it for UV levels that people are likely to experience in a range of natural conditions.
"I think you're always surprised by what a safe sun time is," he says. "It really depends on the weather, but it can be minutes."
Sunscreen, however, helps. Wilson tried coating the sensor with sunscreen and found that the color-change happened much more slowly. Users could put sunscreen on the device when they apply sunscreen to their own skin as a way to match their application with the sensor's alert, he says.
The researchers expect that people will use this device to monitor sun exposure, but the sensor also could be used in other situations where there's utility to measuring light exposure. For example, UV radiation is often used to sterilize environments. Deravi says these stickers could be used to indicate when a surface has been exposed to UV radiation for long enough to be fully sterilized.
Source and top image: Northeastern University