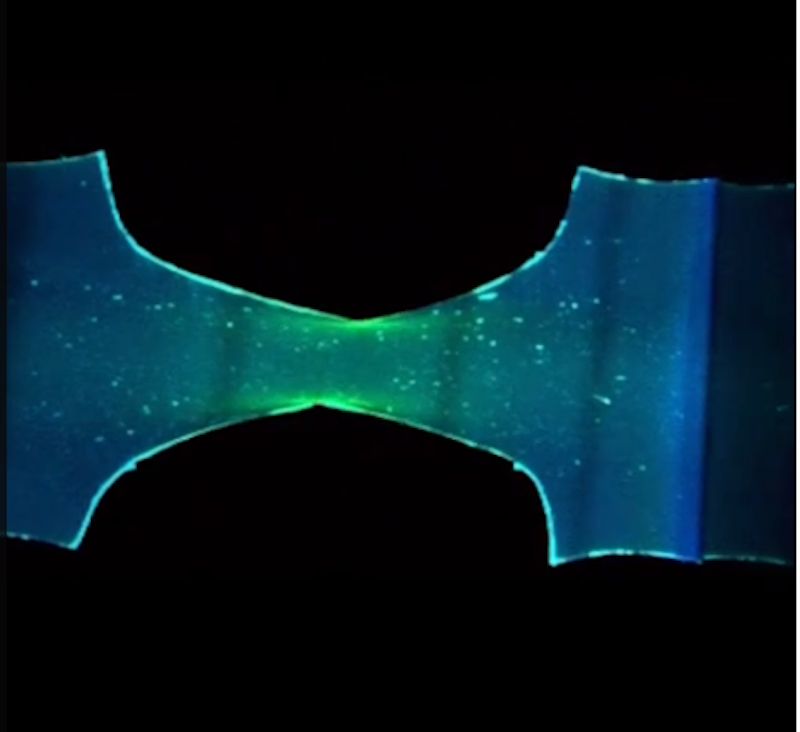 Stretchy films and squishy gels help make wearable electronics, soft robotics and biocompatible tissues a reality. But too much force can cause these polymers to break apart without warning. To detect stress before it's too late, researchers reporting in the Journal of the American Chemical Society show they have designed a compound with "wings" that makes these materials change color when they are stretched or crushed.
Plasticky films and polymer gels — soft 3D networks filled with liquids — can be bendable, stretchable or compressible. And while most polymer films only snap apart when pulled too far, many gels aren't very strong, cracking under relatively small amounts of pressure. Yet there isn't a way to predict how tough the spongy material will be. In previous research, Shohei Saito and colleagues developed V-shaped molecules, known as flapping molecular (FLAP) force probes. FLAPs have two side structures resembling wings that flatten under pressure, causing a color change from blue to green fluorescence. This probe worked as expected when incorporated into a polyurethane film, but when added to a liquid-soaked polymer gel, the compound spontaneously turned fluorescent green without any external force. So, Saito and Takuya Yamakado set out to improve the FLAP molecule so that it would accurately detect mechanical stresses in both a polymer gel and a film. For further information see the IDTechEx report on Flexible, Printed and Organic Electronics 2020-2030: Forecasts, Technologies, Markets.
The researchers modified their earlier version by replacing the two anthraceneimide wings with pyreneimide ones, attaching them to opposite sides of the same flexible central cyclooctatetraene joint. When they added the probe into a polymer film and stretched the material, its fluorescence shifted strongly from blue to green. It also produced a color change that was visible to the naked eye. Next, the researchers incorporated the new FLAP probe into a polyurethane gel soaked in an organic solvent, creating a yellow cylinder that fluoresced blue, and then compressed the material. The cylinder's fluorescence became measurably greener as more pressure was exerted. In their final test, the researchers placed metal letters F-L-A-P on a rectangular block of the gel. They used maps of the green to blue fluorescence ratio to calculate the pressure each letter placed on the gel below, which ranged from 0 to 1 MPa. The researchers say this study could help them develop tougher gel materials and nanoscale tension probes for cell membranes.
Source and top image: American Chemical Society