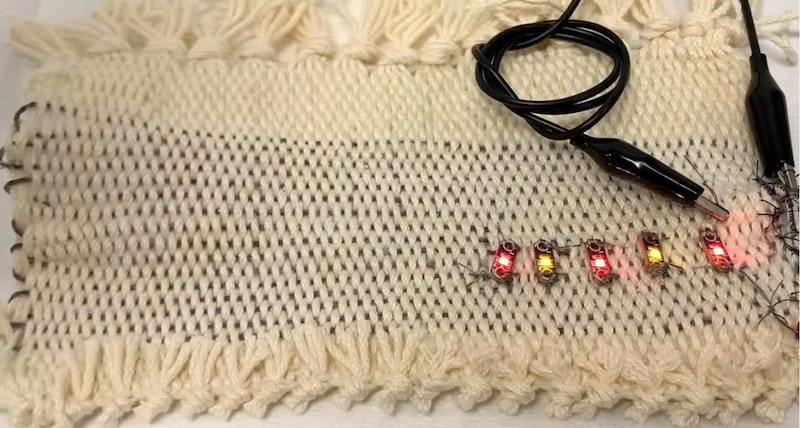 In a new study, North Carolina State University researchers found a way to prevent electrical malfunctions in yarns designed to store electrical energy. Ultimately, the findings could help advance the development of "smart textiles" that would capture energy from the wearer's movements and power sensors and wearable electronics.
The researchers reported in npj Flexible Electronics that they were able to prevent short-circuiting in yarns that act as supercapacitors - which are electrical devices that store energy - by wrapping the yarns with an insulating thread. They also tested the strength and durability of the yarns to make sure they could still work after going through knitting and weaving processes. For further information see the IDTechEx report on E-Textiles & Smart Clothing 2021-2031: Technologies, Markets and Players.
"A supercapacitor functions like a battery, but in this case, we're working on a flexible battery shaped as a textile yarn that you could weave or knit into your T-shirt or sweater," said Wei Gao, associate professor of textile engineering, chemistry and science and a University Faculty Scholar at NC State. "In this study, we have woven this yarn into a piece of fabric so that it can store electrical energy, and eventually we want to use it to power whatever electronic devices you need, whether it be a sensor, a light or even a cell phone."
While research into these so-called "yarn-shaped supercapacitors" is promising, researchers say developers face a consistent problem with their design: the yarn-shaped supercapacitors are more likely to short circuit as their length increases. Short-circuiting is when the electric current flows through an unintended path. It is a safety concern because a short circuit can result in a burst of heat energy or even a fire.
"Everybody is trying to make smart electronics that can be incorporated into cloth or fabric," Gao said. "What we found is if you try to make a supercapacitor yarn longer than 8 inches, it's pretty easy for this device to short-circuit. It's pretty dangerous, and it's something nobody wants to encounter when wearing a smart suit."
To solve that problem, the researchers tested what would happen when they wrapped the super-capacitor yarn electrodes with insulating threads. The idea was that the threads would act as a physical barrier, keeping the opposite electrodes from contacting each other and preventing short-circuiting. They tested their device's performance by connecting the electrodes to a power source and recording the device's current response. They also tested how well the yarns were able to hold a charge. They found that the yarns kept 90% of the initial energy after charging and discharging them 10,000 times.
The researchers also tested to see if they could withstand bending and stretching by weaving their yarn-shaped supercapacitors into a fabric.
"The yarns need to be flexible and strong enough so that when you bend, stretch and press them, they keep their original electrical performance after all of those mechanical deformations," said the study's lead author Nanfei He, postdoctoral research scholar in textile engineering, chemistry and science at NC State. "The yarns all kept their original performance, even after going through weaving and knitting."
Researchers said they made the yarn-shaped supercapacitor using processes that are conventional in textile manufacturing.
"All of these processes can be scaled up very easily," He said.
In future work, the researchers want to incorporate their design into a garment, and to try to integrate it with other energy-generating devices.
"Materials innovation and process engineering are critical to the scalability and device performance," said Feng Zhao, CEO of Storagenergy Technologies Inc., the industrial partner of the project. "We have developed a process to produce thousands of meters of high-performance yarns in a continuous manner."
Source and top image: North Carolina State University