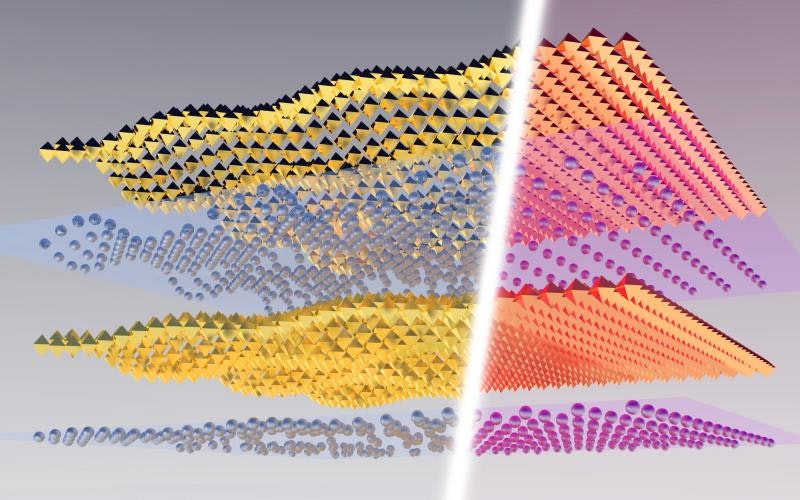 A study by researchers at the U.S. Department of Energy's Oak Ridge National Laboratory takes a fresh look at what could become the first step toward a new generation of solar batteries. The study examines the structure of metal halide perovskites, materials promising for their ability to turn light into electric energy, known as photovoltaic conversion. The study relied on the comprehensive expertise and state-of-the-art equipment of ORNL's Center for Nanophase Materials Sciences, or CNMS, to probe how that structure interacts with ions in motion, electric polarization and other phenomena to generate that energy. Results could point to techniques for designing more efficient, longer-lasting solar-cell batteries and other photovoltaic devices.
"These materials have mostly been studied under static conditions," said ORNL's Yongtao Liu, lead author of the study with ORNL's Olga Ovchinnikova. "We studied the materials in real time so we could understand such variables as how the ions are moving. You can't get a complete picture otherwise. Our findings suggest these ion migration patterns are key to efficiency in converting solar energy to power and the stability of the solar cells." Metal halide perovskites, a family of crystalline metals, became a focus of solar-cell research in recent years when studies revealed the materials' potential to offer untapped reservoirs of energy generated from light. The continuing search for clean, reliable power sources makes them a natural candidate for research. For further information see the IDTechEx report on Future Stationary Energy Storage: Hydrogen, Batteries, Gravity, Gas, Other 2022-2042.
"There's a huge interest in these materials because standard multicrystalline silicon-based solar cells have reached a peak conversion efficiency of about 23 percent over the past 40 years," said Ovchinnikova, who oversaw experiments while a staff member at the CNMS. "These metal halide perovskites have already surpassed that efficiency rate in the past decade alone."
The perovskites don't just offer more energy for less light. Unlike silicon, they're lightweight, flexible and inexpensive, meaning they could be spin-cast into thin, malleable and easily manufactured films that could attach to just about anything.
"We can use 3D printing to create wearables, put them on top of cars and really democratize the use of perovskite solar cells," Ovchinnikova said. "You could put them anywhere." But that's only if scientists can find a way to make the perovskites as durable as silicon. The materials tend not to hold up for long as is.
"No material's perfect," Ovchinnikova said. "These perovskites work well but degrade and lose their efficiency over time. To make them last longer and work better to maintain that efficiency, we need to better understand the properties that lead to their superior performance."
The study required a comprehensive suite of new methods to begin unraveling the chemical, physical and other characteristics that make perovskites convert light to energy more efficiently. Mass spectrometers and scanning probe microscopes, for example — two of the usual big guns in the scientific arsenal for inspecting chemical and physical makeup — weren't enough on their own.
"In general, we tend to visualize chemical nature on one instrument and physical nature on another," Ovchinnikova said. "It's difficult to separate what's taking place that way because these behaviors are intertwined. That's why we needed the unique capabilities available at the CNMS."
The researchers used innovative, multimodal instruments to look closer and found new ways to separate the behaviors. "A mass spectrometer doesn't show us how the ions move," Ovchinnikova said. "So we used a novel instrument that combines a mass spectrometer and scanning probe microscope in one system. We also developed an approach on this system that enabled us to see the ions move while the material interacts with light in real time and incorporated new methods of machine learning to process the acquired data and simulate these behaviors. These methods showed the behaviors we see are driven not by individual properties but by properties acting together."
The researchers applied for patents for the methods they developed. They plan to use those techniques for future studies, including efforts to synthesize tougher, longer-lasting perovskites for solar cells and panels. The team's combination of theory with modeling computation, multimodal imaging, data analytics and experimentation blazed several new trails at once.
"This approach couldn't have been done anywhere but ORNL where we have this vast array of resources all in one place," Ovchinnikova said. "We're using those approaches now with other classes of materials to understand their properties as well."
Researchers haven't yet unlocked the secret to perfecting perovskites as solar cells. But the ORNL study outlines promising avenues to further illuminate fundamental physics for practical and sustainable energy applications. "Now that we better understand some of the fundamental physics, we're looking at how to engineer and improve the materials to enhance their photovoltaic effects," Ovchinnikova said. "We can think about the next level."
Source and top image: Oak Ridge National Laboratory