First Roboskin for Human-Like Sensing of Objects by Robots 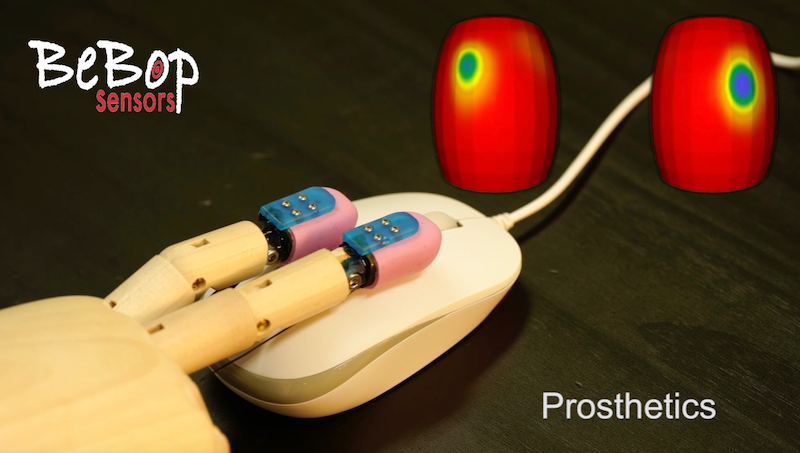 BeBop Sensors Inc, a world leader in smart fabric sensor technologies, announced today the BeBop Sensors RoboSkin line of skin-like coverings for tactile awareness for humanoid robots and prosthetics. A true nervous system for robots at less than 1mm thick, RoboSkin is the only technology that fits all robotic body parts: limbs, fingers, feet, head, and torso, to make robots "feel" better. RoboSkin's advanced fabric-based sensor skin can be shaped to any surface allowing quick tailoring to fit any robot, with spatial resolution and sensitivity that exceeds human abilities for a true partnership between humans and their robot helpers.
The Missing Component to Make Robots More Human - the Sense of Touch
Advances in robotics, such as vision and listening, are missing a key element -- the sense of touch, essential for practical human/robot interaction. As robots are quickly becoming part of our world, they need to interact and learn by sense of touch and feel. Flexible, reliable, and highly proprietary, BeBop Sensors' RoboSkin provides this essential touch factor, with technology based on BeBop's fabric sensors, with millions of sensors in daily use throughout the world and over 30 U.S. and international patents. For further information see the IDTechEx report on Printed and Flexible Sensors 2022-2032: Technologies, Players, Markets.
Humanoid Robots -- a World Designed with and for Humans
The Census Bureau predicts that for the first time ever, there will be more Americans over the age of 65 than under 18, with Japan having the oldest population with 30% over 65. In addition, "The Great Resignation" shows no sign of slowing down, with record numbers of people leaving the work force. Human-like robots are stepping up to this urgent need, augmenting humans in the workplace, hospitals, and homes; with roles in healthcare, as domestic help, in manufacturing, distribution, biohazards, and even in entertainment and companionship roles. A human shape ensures a robot should be able to perform any human task; to fit through any door and use every human tool. Robots do not need to have the environment made around their needs -- robots can do jobs humans want to avoid.
Founder Keith McMillen said, "I have been working with roboticists refining our RoboSkin for 10 years. We are pleased we can make this important contribution to the worldwide effort to bring humanoid robots into our lives to help people live longer, healthier, and more enjoyable lives."
RoboSkin is available immediately for a variety of applications in robotics and prosthetics, including biohazard, digital health, IoT, VR/AR, automotive, law enforcement, testing, and more. For more information, see the video, website: www.bebopsensors.com

.
About Keith McMillen, Founder & CTO, BeBop Sensors
BeBop Sensors' Founder & CTO, Keith McMillen started and sold two companies in his 40+ years innovating in the sensor and audio market. Zeta Music revolutionized stringed instruments and was sold to Gibson Guitars in 1992. Octiv, started in 2000, received funding from 3i and Intel Capital and was sold to Plantronics in 2005. McMillen is the inventor on numerous patents, has released hundreds of profitable products and published dozens of scholarly papers; as well as winning a Guthman Award in 2010. He received a BS in Acoustics from University of Illinois at Urbana.
Source and top image: BeBop Sensors