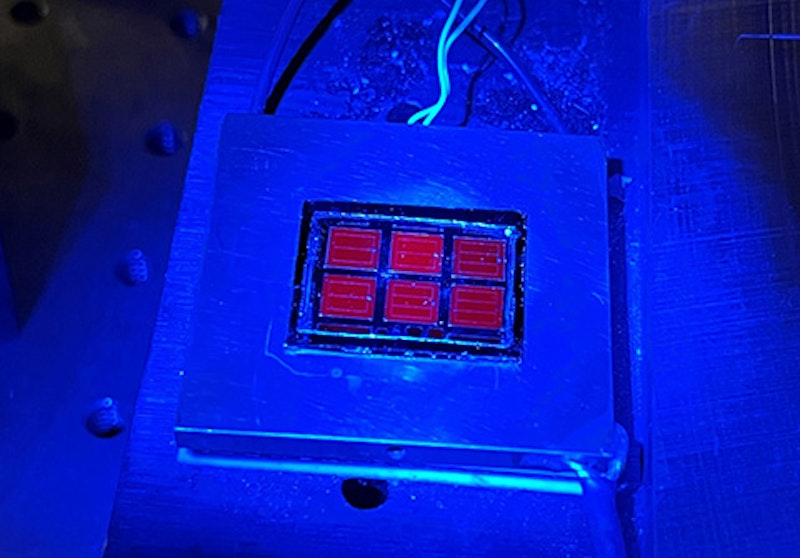 Researchers at the U.S. Department of Energy's National Renewable Energy Laboratory (NREL) created a solar cell with a record 39.5% efficiency under 1-sun global illumination. This is the highest efficiency solar cell of any type, measured using standard 1-sun conditions.
"The new cell is more efficient and has a simpler design that may be useful for a variety of new applications, such as highly area-constrained applications or low-radiation space applications," said Myles Steiner, a senior scientist in NREL's High-Efficiency Crystalline Photovoltaics (PV) Group and principal investigator on the project. He worked alongside NREL colleagues Ryan France, John Geisz, Tao Song, Waldo Olavarria, Michelle Young, and Alan Kibbler. NREL scientists previously set a record in 2020 with a 39.2% efficient six-junction solar cell using III-V materials.
Several of the best recent solar cells have been based on the inverted metamorphic multijunction (IMM) architecture that was invented at NREL. This newly enhanced triple-junction IMM solar cell has now been added to the Best Research-Cell Efficiency Chart. The chart, which shows the success of experimental solar cells, includes the previous three-junction IMM record of 37.9% established in 2013 by Sharp Corporation of Japan.
The improvement in efficiency followed research into "quantum well" solar cells, which utilize many very thin layers to modify solar cell properties. The scientists developed a quantum well solar cell with unprecedented performance and implemented it into a device with three junctions with different bandgaps, where each junction is tuned to capture and utilize a different slice of the solar spectrum.
The III-V materials, so named because of where they fall on the periodic table, span a wide range of energy bandgaps that allow them to target different parts of the solar spectrum. The top junction is made of gallium indium phosphide (GaInP), the middle of gallium arsenide (GaAs) with quantum wells, and the bottom of lattice-mismatched gallium indium arsenide (GaInAs). Each material has been highly optimized over decades of research.
"A key element is that while GaAs is an excellent material and generally used in III-V multijunction cells, it does not have quite the correct bandgap for a three-junction cell, meaning that the balance of photocurrents between the three cells is not optimal," said France, senior scientist and cell designer. "Here, we have modified the bandgap while maintaining excellent material quality by using quantum wells, which enables this device and potentially other applications."
The scientists used quantum wells in the middle layer to extend the bandgap of the GaAs cell and increase the amount of light that the cell can absorb. Importantly, they developed optically thick quantum well devices without major voltage loss. They also learned how to anneal the GaInP top cell during the growth process in order to improve its performance and how to minimize the threading dislocation density in lattice-mismatched GaInAs, discussed in separate publications. Altogether, these three materials inform the novel cell design.
III-V cells are known for their high efficiency, but the manufacturing process has traditionally been expensive. So far, III-V cells have been used to power applications such as space satellites, unmanned aerial vehicles, and other niche applications. Researchers at NREL have been working toward drastically reducing the manufacturing cost of III-V cells and providing alternate cell designs, which will make these cells economic for a variety of new applications.
The new III-V cell was also tested for how efficient it would be in space applications, especially for communications satellites, which are powered by solar cells and for which high cell efficiency is crucial, and came in at 34.2% for a beginning-of-life measurement. The present design of the cell is suitable for low-radiation environments, and higher-radiation applications may be enabled by further development of the cell structure.
For further information on energy harvesting research and for a full list of market research reports from IDTechEx, please visit www.IDTechEx.com