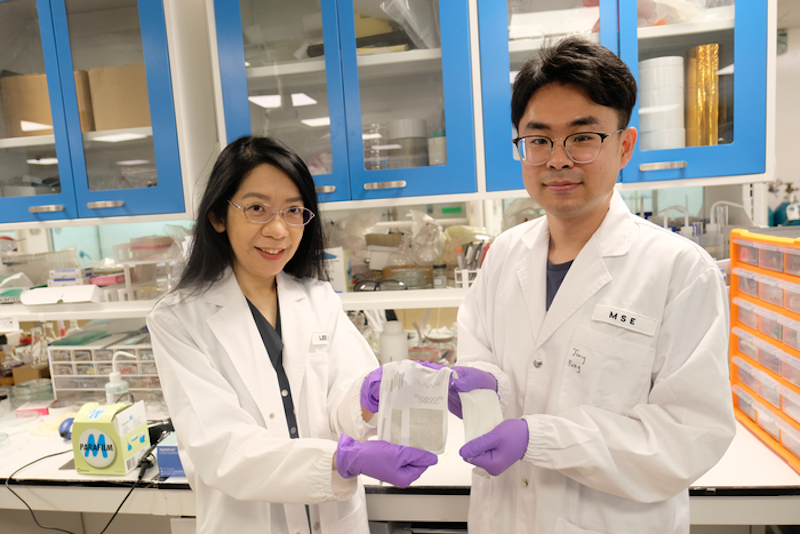 Scientists at Nanyang Technological University, Singapore (NTU Singapore) have developed a stretchable and waterproof 'fabric' that turns energy generated from body movements into electrical energy. A crucial component in the fabric is a polymer that, when pressed or squeezed, converts mechanical stress into electrical energy. It is also made with stretchable spandex as a base layer and integrated with a rubber-like material to keep it strong, flexible, and waterproof. In a proof-of-concept experiment reported in the scientific journal Advanced Materials, the NTU Singapore team showed that tapping on a 3cm by 4cm piece of the new fabric generated enough electrical energy to light up 100 LEDs.
Washing, folding, and crumpling the fabric did not cause any performance degradation, and it could maintain stable electrical output for up to five months, demonstrating its potential for use as a smart textile and wearable power source.
Materials scientist and NTU Associate Provost (Graduate Education) Professor Lee Pooi See, who led the study, said: "There have been many attempts to develop fabric or garments that can harvest energy from movement, but a big challenge has been to develop something that does not degrade in function after being washed, and at the same time retains excellent electrical output. In our study, we demonstrated that our prototype continues to function well after washing and crumpling. We think it could be woven into t-shirts or integrated into soles of shoes to collect energy from the body's smallest movements, piping electricity to mobile devices."
The electricity-generating fabric developed by the NTU team is an energy harvesting device that turns vibrations produced from the smallest body movements in everyday life into electricity. The prototype fabric produces electricity in two ways: when it is pressed or squashed (piezoelectricity), and when it comes into contact or is in friction with other materials, such as skin or rubber gloves (triboelectric effect). For further information see the IDTechEx report on Materials for Printed/Flexible Electronics 2021-2031: Technologies, Applications, Market Forecasts.
To fabricate the prototype, the scientists first made a stretchable electrode by screen-printing an 'ink' comprising silver and styrene-ethylene-butylene-styrene (SEBS), a rubber-like material found in teethers and handlebar grips to make it more stretchable and waterproof. This stretchable electrode is then attached to a piece of nanofibre fabric that is made up of two main components: poly(vinylidene fluoride)-co-hexafluoropropylene (PVDF-HPF), a polymer that produces an electrical charge when compressed, bent, or stretched; and lead-free perovskites, a promising material in the field of solar cells and LEDs.
NTU PhD student Jiang Feng, who is part of the research team, explained: "Embedding perovskites in PVDF-HPF increases the prototype's electrical output. In our study, we opted for lead-free perovskites as a more environmentally friendly option. While perovskites are brittle by nature, integrating them into PVDF-HPF gives the perovskites exceptional mechanical durability and flexibility. The PVDF-HPF also acts an extra layer of protection to the perovskites, adding to its mechanical property and stability." The result is a prototype fabric that generates 2.34 watts per square metre of electricity - enough to power small electronic devices, such as LEDs and commercial capacitors.
To demonstrate how their prototype fabric could work, the NTU scientists showed how a hand tapping on a 3cm by 4cm piece of the fabric continuously could light up 100 LEDs, or charge various capacitors, which are devices that store electrical energy and are found in devices like mobile phones. The fabric showed good durability and stability - its electrical properties did not deteriorate following washing, folding, and crumpling. It also continued to produce a continuous stable electrical output up to five months. The scientists showed that their fabric could harness energy from a range of human movements by attaching it to the arm, leg, hand, and elbow, as well as to the insoles of shoes, and did so without impacting on the movements.
Prof Lee said: "Despite improved battery capacity and reduced power demand, power sources for wearable devices still require frequent battery replacements. Our results show that our energy harvesting prototype fabric can harness vibration energy from a human to potentially extend the lifetime of a battery or even to build self-powered systems. To our knowledge, this is the first hybrid perovskite-based energy device that is stable, stretchable, breathable, waterproof, and at the same time capable of delivering outstanding electrical output performance."
This fabric-based energy harvesting prototype builds on the NTU team's body of work that looks at how energy generated in the environment could be scavenged. For instance, the team recently developed a type of film that could potentially be mounted on roofs or walls to harness the energy produced from wind or raindrops falling onto the film. The team is now looking at how the same fabric could be adapted to harvest different forms of energy.
Source and top image: Nanyang Technological University