Displays for consumer electronic devices such as e-Readers, smart phones, and tablet PCs never quite meet all the demands of all the users all the time. Some lack color and video capability, others use too much battery power, while others are nearly unreadable pool-side.
Researchers at the University of Cincinnati and a small start-up company, Gamma Dynamics LLC, have described a break-through new approach creating electrofluidic displays that can hold an image without power consumption.
Such breakthroughs are essential in the quest for creating more user and environmentally friendly electronics. And unlike the display in the Amazon Kindle, the technology can boast >70% white reflectance (close to paper which is 80%) and potentially video-speed operation.
Electrofluidic displays are a variant of electrowetting displays, a technology that has been in development for 10 years, and until now, required electrical power to hold an image on the screen.
The new breakthrough works by moving a colored fluid (similar to inkjet fluid) between the front and the backside of a reflective sheet. The space above and beneath this special sheet is similar in geometry so that the fluid can remain stationary in any position without voltage, as scientifically predicted by Laplace pressure.
The team of engineers and scientists had realized this patent-pending concept several years ago, but what was lacking was a way to make it manufacturable. Manufacturability using the same equipment used for manufacturing LCDs is essential, because a new LCD factory now costs around $2 B. So, new technology needs to conform to the existing infrastructure.
Fortunately, the Univ. of Cincinnati and Gamma Dynamics were able to team with DuPont engineers who are developing a new film that can be laminated and optically imaged to form holes, spacers, and other key features. As a result, the team was able to create complex features using equipment similar to that used for making simple printed circuit boards. Each pixel is about the same width as a human hair.
The collaborative partnership does not end there. The team also works with Cincinnati's Sun Chemical corporation on adapting inkjet fluids so they could be moved inside the tiny pixels. The movement of the fluids is best illustrated as shown on the cover of Applied Physics Letters (Oct. 4th, 2010). Voltage is used to move colored fluid between an upper viewable cavity, and a lower hidden cavity, and importantly, when the voltage is removed the fluid can sit in any intermediate position, otherwise known as grayscale pixel operation. 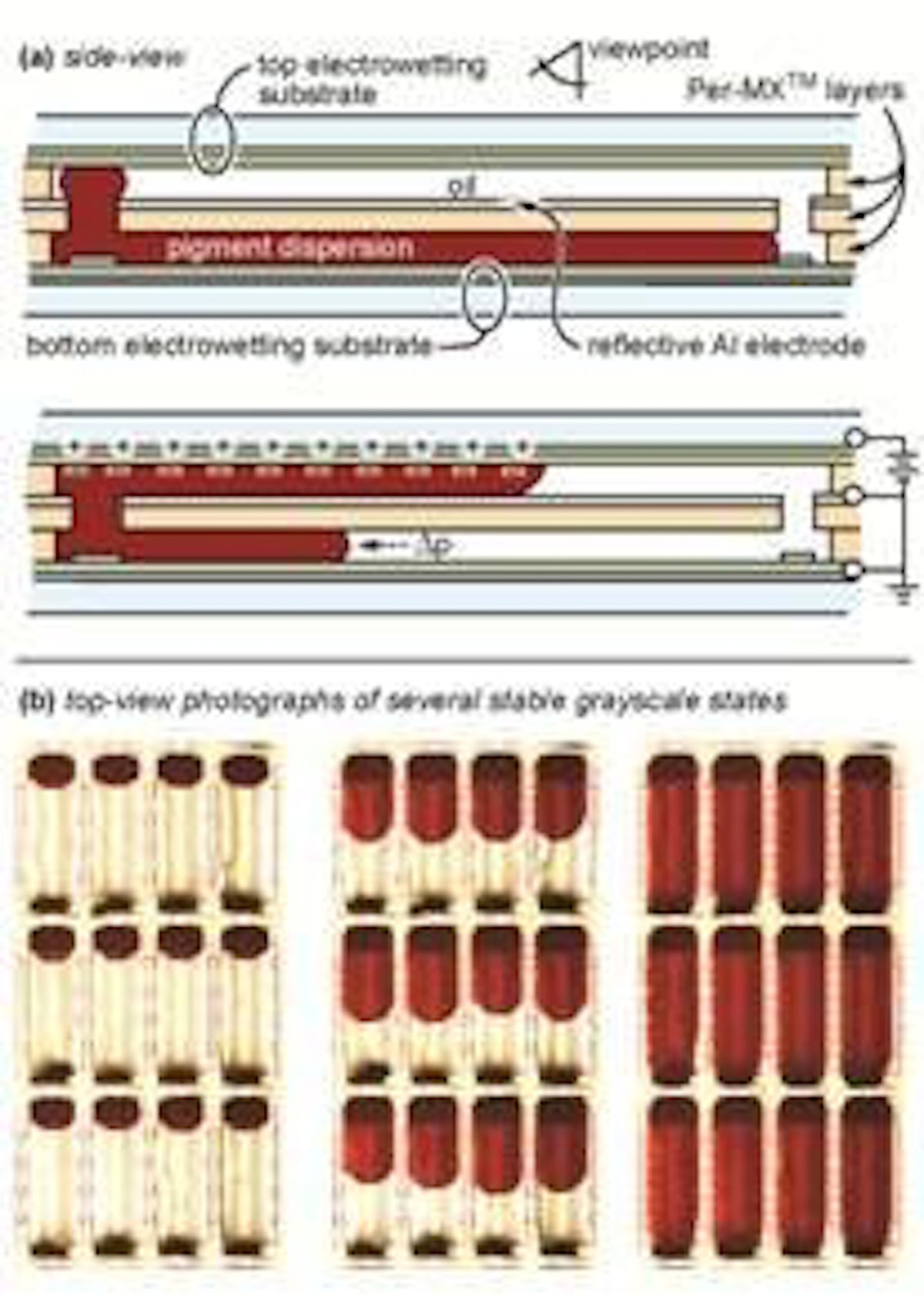 The Novel Devices Laboratory has been developing fluid-based devices for displays and other applications for industry and the military for about five years. Recently, the University of Cincinnati won a State of Ohio Third Frontier award to create the Ohio Center for Microfluidic Innovation (OCMI) which will expand the university and local industry capability in commercializing micro/electrofluidic technologies, including biomedical devices.
Gamma Dynamics LLC was created in 2009 to specifically commercialize the electrofluidic display technologies aimed at consumer electronic devices and commercial advertising and labeling applications. The company has its headquarters in Cincinnati and has laboratory operations in both Cincinnati and at the ASU Flexible Display Center in Tempe, Arizona. Gamma Dynamics is the exclusive licensee of the University of Cincinnati electrofluidic display technology and is working with leading display makers from around the world. Gamma Dynamics has been awarded several SBIR awards from the National Science Foundation for development of electronic display and electronic window technologies. Electronic windows are designed to manage visible light and infrared heat from the sun independently, based upon consumer preference and need for energy control.
Additional technical information is contained in the paper, "Electrofluidic Display Pixels with Greyscale Operation and Infinite Bistablility", viewable at, http://gammadynamics.net/news/aploct2010/.
For more attend: Printed Electronics USA 2010.
Source: The University of Cincinnati