Electrofluidics breakthrough could see e-readers with videos in color

Until recently, electronic devices could never have it all: high readability in bright sunlight and the ability to display high-speed content - then hold that image indefinitely with absolutely zero electrical power usage. A new e-Display design from the University of Cincinnati, just published, changes that picture.
Oct. 4th issue of the high-impact journal, Applied Physics Letters, contains a new electrofluidics design from the University of Cincinnati and start-up company Gamma Dynamics that promises to dramatically reshape the image capabilities of electronic devices.
This patent-pending electrofluidics breakthrough by the Novel Devices Laboratory at the University of Cincinnati and partner companies Gamma Dynamics, Dupont and Sun Chemical follows about seven years of work. According to lead researcher Jason Heikenfeld, UC associate professor of electrical and computer engineering in the College of Engineering & Applied Science, and John Rudolph, president of Gamma Dynamics, the breakthrough is even more impressive when you realize that similar research efforts elsewhere have lasted a decade without achieving similar results.
Importantly, this new "zero power" e-Design from UC can be manufactured with existing equipment and technology. 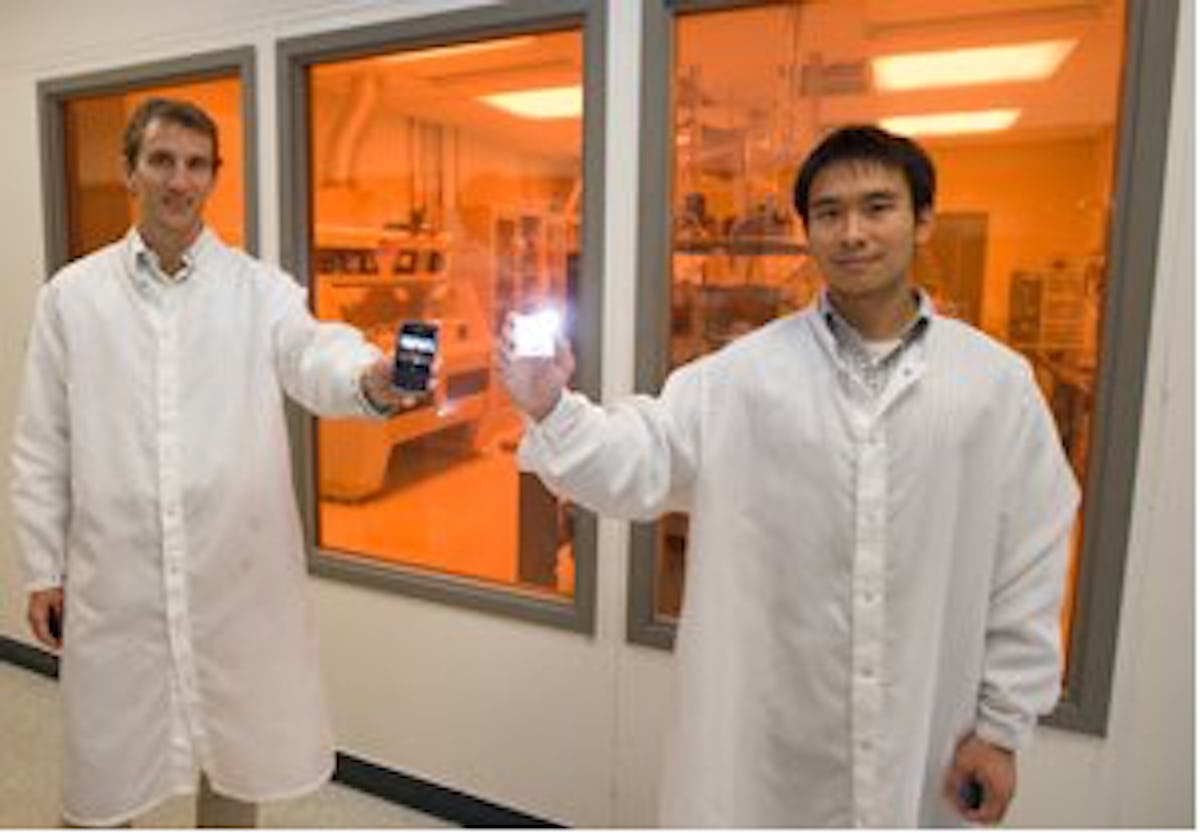 Image: UC's Jason Heikenfeld, at left, and student Shu Yang demonstrate how the technology developed by UC can employ bright, incident light by reflecting it. Many of today's electronic devices, like the BlackBerry held by Heikenfeld, cannot do so.
Said Heikenfeld, "What we've developed breaks down a significant barrier to bright electronic displays that don't require a heavy battery to power them."
He explained that, currently, electronic devices fall into two basic camps. The first includes those devices that offer limited function and slow speed but require little power to operate. These would include e-readers like the Kindle.
In the second camp, devices like cell phones, laptops and the iPad provide high color saturation and high-speed capability for video and other functions but at a cost of high-power usage.
Heikenfeld stated, "Conventional wisdom says you can't have it all with electronic devices: speed, brightness and low-cost manufacturing. That's going to change with the introduction of this new discovery into the market. This idea has been in the works for a while, but we did not start really pushing the project until we thought we could make it manufacturable."

A new design that makes use of reflection

Before describing UC's new "zero-power" design, it's helpful to understand the basic design of existing electronic devices.
Think of an e-reader as a bunch of micro-sized buckets (or pixels) of mixed black and white paint, where you can move the black and white pigments to the top or the bottom of the bucket. Just like mixing paint, the process is not fast. That's somewhat close to how today's e-readers work. The slow movement of these particles forms the text and grayscale images you see on an e-reader. These devices use practically no power unless you are switching the screen. It's actually making use of ambient light to make the particles visible. When the user turns the device on or off or switches a page, he's electronically "mixing the paint" (or pixels) to create the overall image or text page.
Faster, color-saturated, high-power devices like a computer's liquid-crystal display screen, an iPad or a cell phone require high power, in part, because they need a strong internal light source within the device (that "backlights" the screen) as well as color filters in order to display the particles as color/moving images. The need for an internal light source within the device also means visibility is poor in bright, natural light.
The new "zero-power" design combines the best features of both these kinds of devices. It requires low-power because it makes use of ambient light vs. a strong, internal light source within the device. As such and because of its low-power requirements, this new technology will make for more environmentally friendly electronic devices, stated Heikenfeld.
Yet, even though an electronic device with this eletrofluidic technology would lack a strong, internal light source, it would still display bright images at high speed. How?

Image: Two horizontal "boxes" above represent views of the new technology design - with the pigment dispersion fluid represented as "in motion." Ambient light enters via the device screen. When that light hits the layer of reflective electrodes, it is amplified.
Behind the display screen are two layers of liquid (oil and a pigment dispersion fluid like an inkjet fluid). Between the two layers are reflective electrodes. Think of these electrodes as a highly reflective mirror.
Ambient light enters through the display screen and through the first layer of liquid and hits the reflective electrodes. When the light hits that reflective electrode, it bounces back out to the viewer's eye, creating the perception of a bright, color-saturated image...or text or video....
A small electric charge powers the movement of these oil and pigment-dispersion liquids. The movement occurs between a bottom layer behind the reflective electrodes and a top layer in front of the reflective electrodes. When the pigmented substance is positioned in the "top" layer (sandwiched between the ambient light and reflective electrodes), it creates a reflected ray of colored light which combines with literally millions of ambient light rays to produce a full-color display.
(The closest competition with similar brightness is electrochromic technology, which does not switch quickly enough to create video images. And the closest competition that is really low power but can still "do" video is called "Mirasol" technology developed by Quallcomm. However, when trying to display a color like white, the "Mirasol" technology has about one-third the brightness level of the UC technology being announced today. "Mirasol," in fact, resembles greyed newsprint.)

This new technology is manufacturable with current facilities and equipment.

Importantly, the new e-Display design published today is manufacturable with current facilities and technology. Manufacturability using the same equipment as that used for current LCDs was essential since a new LCD plant costs around $2 billion.

When will this technology be available to consumers?

According to Gamma Dynamics' Rudolph, this electrofluidics breakthrough will change the display technology used in a myriad of electronic devices. e-Readers like the Amazon Kindle will be able to display color and video. Devices like cell phones and iPads will require much less power and will be readable even in bright sunlight.
He estimated consumers will likely first see it in action as grocery-store shelf labels and advertising displays in about three years' time.
Currently, liquid-crystal displays are attached to some grocery-store shelves, providing product and price information. These run on battery power; however, the batteries are insufficient to meet the LCDs' high power requirements. So, their brightness levels are insufficient to attract shoppers' attention. Stores still attach paper labels to them in order to indicate sale items or barcodes with eye-catching brightness.
Rudolph said that by substituting the UC-developed electrofluidic e-Display technology, these shelf-label devices would become bright and eye-catching. Given the frequency with which shelf labels are updated, the store labels should then operate for at least five years without the need for battery replacement.
Research support: As mentioned, Gamma Dynamics, Dupont and Sun Chemical partnered with UC in this research. Partial support was also provided by grants from the National Science Foundation, the Army Research Laboratory and the Air Force Research Laboratory.
Main Image: UC student Shu Yang holds prototypes of the e-Display technology developed by UC.
Source: University of Cincinnati
For more attend: Printed Electronics & Photovoltaics USA 2010 .