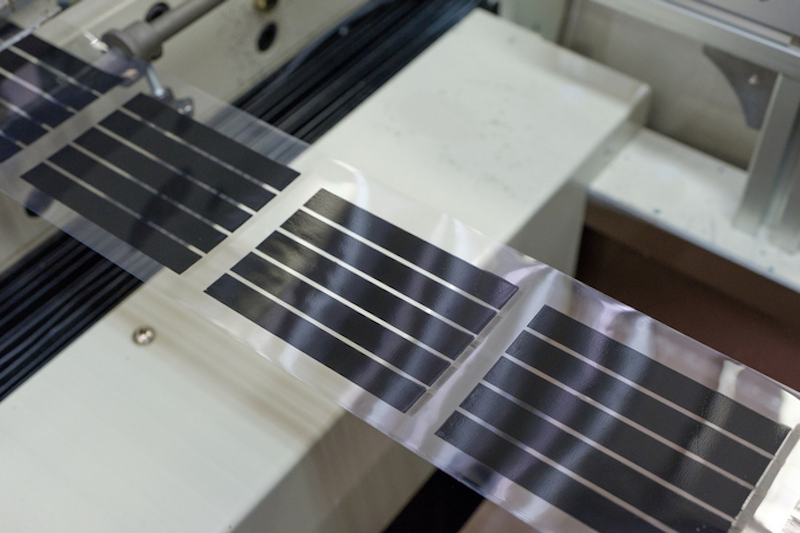 A simple and versatile nanoparticle ink could help next-generation perovskite solar cells to be printed at scale and become the dominant force in commercial photovoltaics.
Made from tin oxide, the ink is created with just one key step at relatively low temperature using microwave technology, and without any need for further purification. It's then used in solar cells to help selectively transport electrons, a crucial step in generating electricity. Prototype devices built with this method have recorded power-conversion efficiencies of 18%, which is among the best efficiencies for a planar-structured perovskite solar cell processed at low temperatures. For further information see the IDTechEx report on Perovskite Photovoltaics 2023-2033.
The ink is suitable for making different types of perovskite solar cells, including with glass and for printing onto plastic, which can be done cheaply at high volumes. This technique, called roll-to-roll coating, is similar to the way newspapers are printed. Within the ink product, the average size of each particle can be controlled to remain between just five and 10 nanometres. To put that in context, a sheet of paper is 100,000 nanometres thick, and your fingernails grow one nanometre every second.
Perovskite solar cells already rival the efficiency of their established silicon counterparts, and they are also more flexible and require less energy to make. Problems with long-term durability and some hurdles in the manufacturing process have so far prevented these exciting materials from overtaking silicon.
Now, though, researchers from the ARC Centre of Excellence in Exciton Science, working with Australia's national science agency CSIRO, may have found an answer to some of these challenges with their tin oxide nanoparticle ink. The results of the work, which received funding from the Australian Renewable Energy Agency (ARENA), have been published in the journal Chemistry of Materials.
CSIRO principal research scientist Dr Doojin Vak said: "Perovskite solar cells can be manufactured by industrial printing. While the process is inherently low-cost, the cost of every component still counts. This work demonstrates a great way to contribute to ultra-low-cost manufacturing of perovskite solar cells in the future."
It's important the nanoparticle ink can be made with microwaves, because direct high-temperature processing methods of flexible solar cell substrates causes degradation, limiting the commercial potential of printable perovskite solar cells. Monash University's Professor Jacek Jasieniak, the senior author on the paper, said: "The use of microwaves to synthesise suitable nanoparticle inks provides a major step forward towards achieving high efficiency perovskite solar cells that can be reproducibly printed while also minimising fabrication costs."
Other synthetic approaches for tin oxide require high pressure, high boiling points and may also need multiple processing steps, ruling them out of contention for cost-effective manufacturing at industrial and commercial scale. Using metal oxides rather than organic ingredients, which get negatively impacted by air and moisture, also extends the lifespan of the final perovskite solar cell devices.
Not only is tin oxide more durable than comparable organic ingredients, it also has a wide band gap and encourages efficient electron transport, characteristics that make it suitable for various types of solar cells and other optoelectronic applications.
Source and top image: ARC Centre of Excellence in Exciton Science