Steel in our Buildings Could Generate Clean Energy 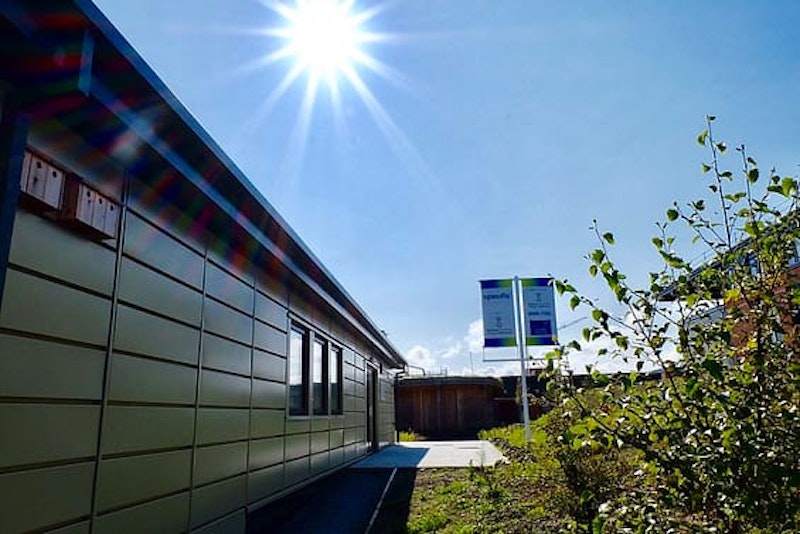 Solar roofing panels which are greener, lighter, cheaper and flexible, and which can be printed on the steel used in buildings, are the focus of a new three-year research collaboration between Swansea University and Tata Steel UK.
The solar roofs would enable buildings to generate, store and release their own secure supply of electricity. This would reduce reliance on fossil fuel energy such as gas, and ease pressure on the National Grid, especially as surplus power generated by a building can be used to charge up electric vehicles.
The concept is called "Active Buildings" and it has already been shown to work. Two "Active Buildings" have been in operation successfully on the Swansea University campus for several years. The aim of the new research is to explore the potential of this technology further and speed up the process of turning it into products for industry to manufacture.
The collaboration was launched with the signing of a Memorandum of Understanding at the University's Bay campus, where the Active Buildings are located. It is the latest chapter in a longstanding partnership between Swansea University and Tata Steel.
Solar energy is crucial in the shift towards clean, green power. In just one hour enough solar energy falls on the earth to meet the energy needs of the entire world for a year. Traditional solar cells are manufactured from silicon, which is expensive and requires a lot of energy to produce. But a new type of cell, called a perovskite solar cell (PSC), which is highly efficient, is a cheaper and lighter alternative to silicon-based solar panels. PSCs can be made locally using widely available materials and manufacturing them emits less than half the carbon compared to a silicon cell. Crucially, another advantage of PSCs over silicon is that they are flexible rather than rigid. This means they can be printed, using techniques such as screen printing, directly onto a material such as coated steel. For further information see the IDTechEx report on Materials for Printed/Flexible Electronics 2021-2031: Technologies, Applications, Market Forecasts.
This opens the door to creating innovative steel products for use in the construction industry that have built-in solar generating technology.
Professor Dave Worsley, head of materials science and engineering at Swansea University, explains: "This technology will help us tackle the energy crisis and the climate crisis at the same time. The future is about solar energy technology being built in, not added on afterwards. These printable solar cells can be built into the fabric of our homes, shops and offices, allowing them to generate the power they need, and more besides. We know the concept works as we've demonstrated it in our Active Buildings in sunny Swansea. This new collaboration with Tata Steel will enable us to develop its potential more quickly, identifying new types of steel products that actively work to generate electricity. Getting this technology into widespread use could hardly be more timely. In the UK and elsewhere it can reduce reliance on fossil fuel energy such as imported gas. It would also ease the pressure on national electricity networks, for example by enabling us to charge up electric vehicles with surplus energy generated by our homes."
Swansea University will contribute expertise in manufacturing the printable cells, led by the SPECIFIC Innovation Centre, which pioneered the concept of Active Buildings and designed and built the Active Office and Classroom. Tata Steel brings in their expertise in coatings on steel, screen printing and supply chains for materials. The project is called STRIPS/Tata Steel Industrial Acceleration.
Sumitesh Das, Tata Steel UK's R&D Director, said: "We are buoyant with the possibilities that the perovskite technology brings to the table - especially in integration to the building and construction solutions - across different value streams in Tata Steel. This Memorandum of Understanding is the beginning of a long journey. Agility and teamwork will define our future in upscaling this technology and creating differentiators for our business. The combination of a "green" solar technology with steel is a significant step in our net zero ambitions. We are excited by the positive effect such solutions can have on some of the poorest communities, who, through such technologies, could be taken out of fuel poverty."
Source and top image: Swansea University