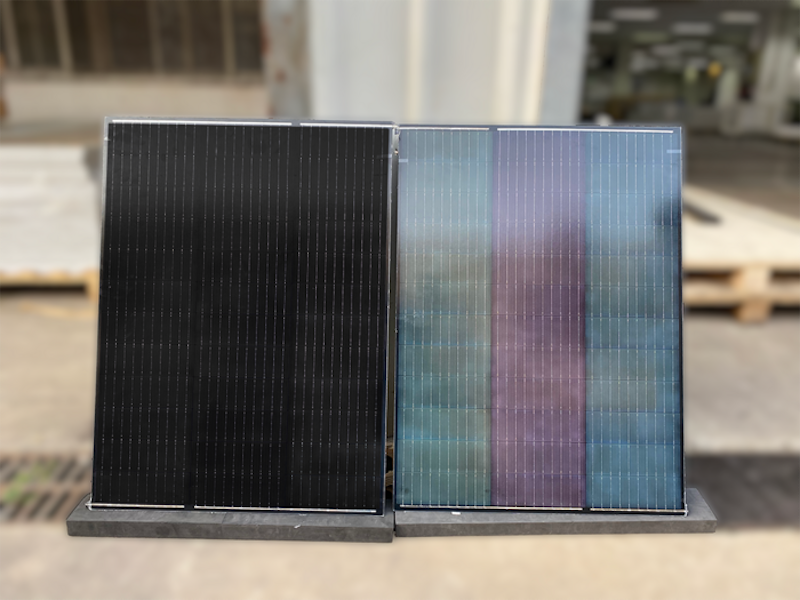 Solar panels aren't just for rooftops anymore - some buildings even have these power-generating structures all over their facades. But as more buildings and public spaces incorporate photovoltaic technologies, their monotonous black color could leave onlookers underwhelmed. Now, researchers reporting in ACS Nano have created solar panels that take on colorful hues while producing energy nearly as efficiently as traditional ones.
Solar panels are typically a deep black color because their job is to absorb light, whereas a red car looks red because the finish reflects red light instead of absorbing it. Most attempts to give these devices color, then, will decrease their ability to absorb light and generate power. One alternative is to use structural sources of color that take advantage of microscopic shapes to only reflect a very narrow, selective portion of light, like the scales on butterfly wings. However, previous technologies attempting to incorporate structural color gave panels an undesirable iridescence or were expensive to implement at a large scale. So, Tao Ma, Ruzhu Wang, and colleagues wanted to develop a way of giving solar panels color using a structural material that would be easy and inexpensive to apply, and that would maintain their ability to produce energy efficiently.
The team sprayed a thin layer of a material called a photonic glass onto the surfaces of solar cells. The glass was made of a thin, disorderly layer of dielectric microscopic zinc sulfide spheres. Although most light could pass through the photonic glass, selective colors were reflected back based on the sizes of the spheres. Using this approach, the researchers created solar panels that took on blue, green and purple hues while only dropping the efficiency of power generation from 22.6% to 21.5%. They also found that solar panels manufactured with this photonic glass layer maintained their color and performance during standard durability tests, and that the fabrication could be scaled up. The researchers plan to explore ways to make the colors more saturated, as well as methods to achieve a wider range of colors.
For further information on energy harvesting research and for a full list of market research reports from IDTechEx, please visit www.IDTechEx.com