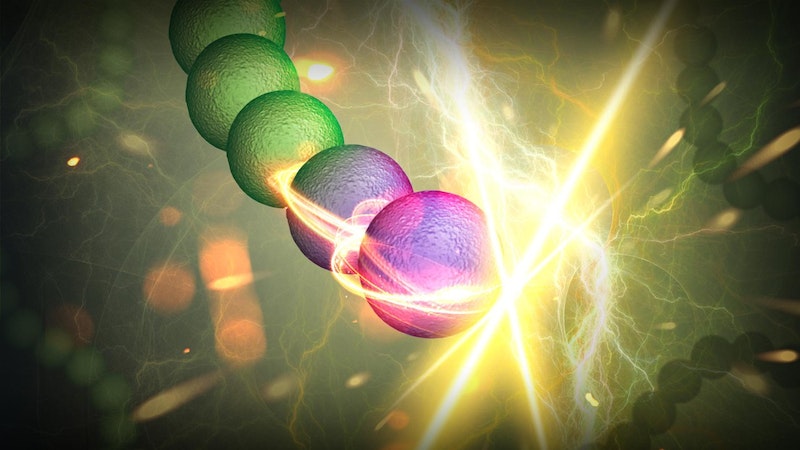 Scientists at EPFL have gotten bacteria to spontaneously take up fluorescent carbon nanotubes for the first time. The breakthrough unlocks new biotechnology applications for prokaryotes, such as near-infrared bacteria tracking and "living photovoltaics" - devices that generate energy using light-harvesting bacteria.
"We put nanotubes inside of bacteria," says Professor Ardemis Boghossian at EPFL's School of Basic Sciences. "That doesn't sound very exciting on the surface, but it's actually a big deal. Researchers have been putting nanotubes in mammalian cells that use mechanisms like endocytosis, that are specific to those kinds of cells. Bacteria, on the other hand, don't have these mechanisms and face additional challenges in getting particles through their tough exterior. Despite these barriers, we've managed to do it, and this has very exciting implications in terms of applications."
Boghossian's research focuses on interfacing artificial nanomaterials with biological constructs, including living cells. The resulting "nanobionic" technologies combine the advantages of both the living and non-living worlds. For years, her group has worked on the nanomaterial applications of single-walled carbon nanotubes (SWCNTs), tubes of carbon atoms with fascinating mechanical and optical properties. For further information see the IDTechEx report on Carbon Nanotubes 2022-2032: Market, Technology, Players
These properties make SWCNTs ideal for many novel applications in the field of nanobiotechnology. For example, SWCNTs have been placed inside mammalian cells to monitor their metabolisms using near-infrared imaging. The insertion of SWCNTs in mammalian cells has also led to new technologies for delivering therapeutic drugs to their intracellular targets, while in plant cells they have been used for genome editing. SWCNTs have also been implanted in living mice to demonstrate their ability to image biological tissue deep inside the body.

Fluorescent nanotubes in bacteria: A first

In an article published in Nature Nanotechnology, Boghossian's group with their international colleagues were able to "convince" bacteria to spontaneously take up SWCNTs by "decorating" them with positively charged proteins that are attracted by the negative charge of the bacteria's outer membrane. The two types of bacteria explored in the study, Synechocystis and Nostoc, belong to the Cyanobacteria phylum, an enormous group of bacteria that get their energy through photosynthesis - like plants. They are also "Gram-negative", which means that their cell wall is thin, and they have an additional outer membrane that "Gram-positive" bacteria lack.
The researchers observed that the cyanobacteria internalized SWCNTs through a passive, length-dependent and selective process. This process allowed the SWCNTs to spontaneously penetrate the cell walls of both the unicellular Synechocystis and the long, snake-like, multicellular Nostoc.
Following this success, the team wanted to see if the nanotubes can be used to image cyanobacteria - as is the case with mammalian cells. "We built a first-of-its-kind custom setup that allowed us to image the special near-infrared fluorescence we get from our nanotubes inside the bacteria," says Boghossian.
Alessandra Antonucci, a former PhD student at Boghossian's lab adds: "When the nanotubes are inside the bacteria, you could very clearly see them, even though the bacteria emit their own light. This is because the wavelengths of the nanotubes are far in the red, the near-infrared. You get a very clear and stable signal from the nanotubes that you can't get from any other nanoparticle sensor. We're excited because we can now use the nanotubes to see what is going on inside of cells that have been difficult to image using more traditional particles or proteins. The nanotubes give off a light that no natural living material gives off, not at these wavelengths, and that makes the nanotubes really stand out in these cells."
The scientists were able to track the growth and division of the cells by monitoring the bacteria in real-time. Their findings revealed that the SWCNTs were being shared by the daughter cells of the dividing microbe. "When the bacteria divide, the daughter cells inherent the nanotubes along with the properties of the nanotubes," says Boghossian. "We call this 'inherited nanobionics.' It's like having an artificial limb that gives you capabilities beyond what you can achieve naturally. And now imagine that your children can inherit its properties from you when they are born. Not only did we impart the bacteria with this artificial behavior, but this behavior is also inherited by their descendants. It's our first demonstration of inherited nanobionics."

"Another interesting aspect is when we put the nanotubes inside the bacteria, the bacteria show a significant enhancement in the electricity it produces when it is illuminated by light," says Melania Reggente, a postdoc with Boghossian's group. "And our lab is now working towards the idea of using these nanobionic bacteria in a living photovoltaic."
"Living" photovoltaics are biological energy-producing devices that use photosynthetic microorganisms. Although still in the early stages of development, these devices represent a real solution to our ongoing energy crisis and efforts against climate change.
"There's a dirty secret in photovoltaic community," says Boghossian. "It is green energy, but the carbon footprint is really high; a lot of CO2 is released just to make most standard photovoltaics. But what's nice about photosynthesis is not only does it harness solar energy, but it also has a negative carbon footprint. Instead of releasing CO2, it absorbs it. So it solves two problems at once: solar energy conversion and CO2 sequestration. And these solar cells are alive. You do not need a factory to build each individual bacterial cell; these bacteria are self-replicating. They automatically take up CO2 to produce more of themselves. This is a material scientist's dream."
Boghossian envisions a living photovoltaic device based on cyanobacteria that have automated control over electricity production that does not rely on the addition of foreign particles. "In terms of implementation, the bottleneck now is the cost and environmental effects of putting nanotubes inside of cyanobacteria on a large scale."
With an eye towards large-scale implementation, Boghossian and her team are looking to synthetic biology for answers: "Our lab is now working towards bioengineering cyanobacteria that can produce electricity without the need for nanoparticle additives. Advancements in synthetic biology allow us to reprogram these cells to behave in totally artificial ways. We can engineer them so that producing electricity is literally in their DNA."
Source and top image: EPFL