Record efficiency of 18.7% for flexible CIGS solar cells on plastics

Scientists at Empa, the Swiss Federal Laboratories for Materials Science and Technology, have further boosted the energy conversion efficiency of flexible solar cells made of copper indium gallium (di)selenide (also known as CIGS) to a new world record of 18.7% - a significant improvement over the previous record of 17.6% achieved by the same team in June 2010. The measurements have been independently certified by the Fraunhofer Institute for Solar Energy Systems in Freiburg, Germany.
It's all about the money. To make solar electricity affordable on a large scale, scientists and engineers worldwide have long been trying to develop a low-cost solar cell, which is both highly efficient and easy to manufacture with high throughput.
Now a team at Empa's Laboratory for Thin Film and Photovoltaics, led by Ayodhya N. Tiwari, has made a major step forward. "The new record value for flexible CIGS solar cells of 18.7% nearly closes the efficiency gap to solar cells based on polycrystalline silicon (Si) wafers or CIGS thin film cells on glass", says Tiwari. He is convinced that "flexible and lightweight CIGS solar cells with efficiencies comparable to the best-in-class will have excellent potential to bring about a paradigm shift and to enable low-cost solar electricity in the near future."
One major advantage of flexible high-performance CIGS solar cells is the potential to lower manufacturing costs through roll-to-roll processing while at the same time offering a much higher efficiency than the ones currently on the market. What's more, such lightweight and flexible solar modules offer additional cost benefits in terms of transportation, installation, structural frames for the modules etc., i.e. they significantly reduce the so-called "balance of system" costs.
Taken together, the new CIGS polymer cells exhibit numerous advantages for applications such as facades, solar farms and portable electronics. With high-performance devices now within reach, the new results suggest that monolithically-interconnected flexible CIGS solar modules with efficiencies above 16% should be achievable with the recently developed processes.
At the forefront of efficiency improvements
In recent years, thin film photovoltaic technology based on glass substrates has gained sufficient maturity towards industrial production; flexible CIGS technology is, however, still an emerging field. The recent improvements in efficiency in research labs and pilot plants - among others by Tiwari's group, first at ETH Zurich and since a couple of years now at Empa - are contributing to performance improvements and to overcoming manufacturability barriers. 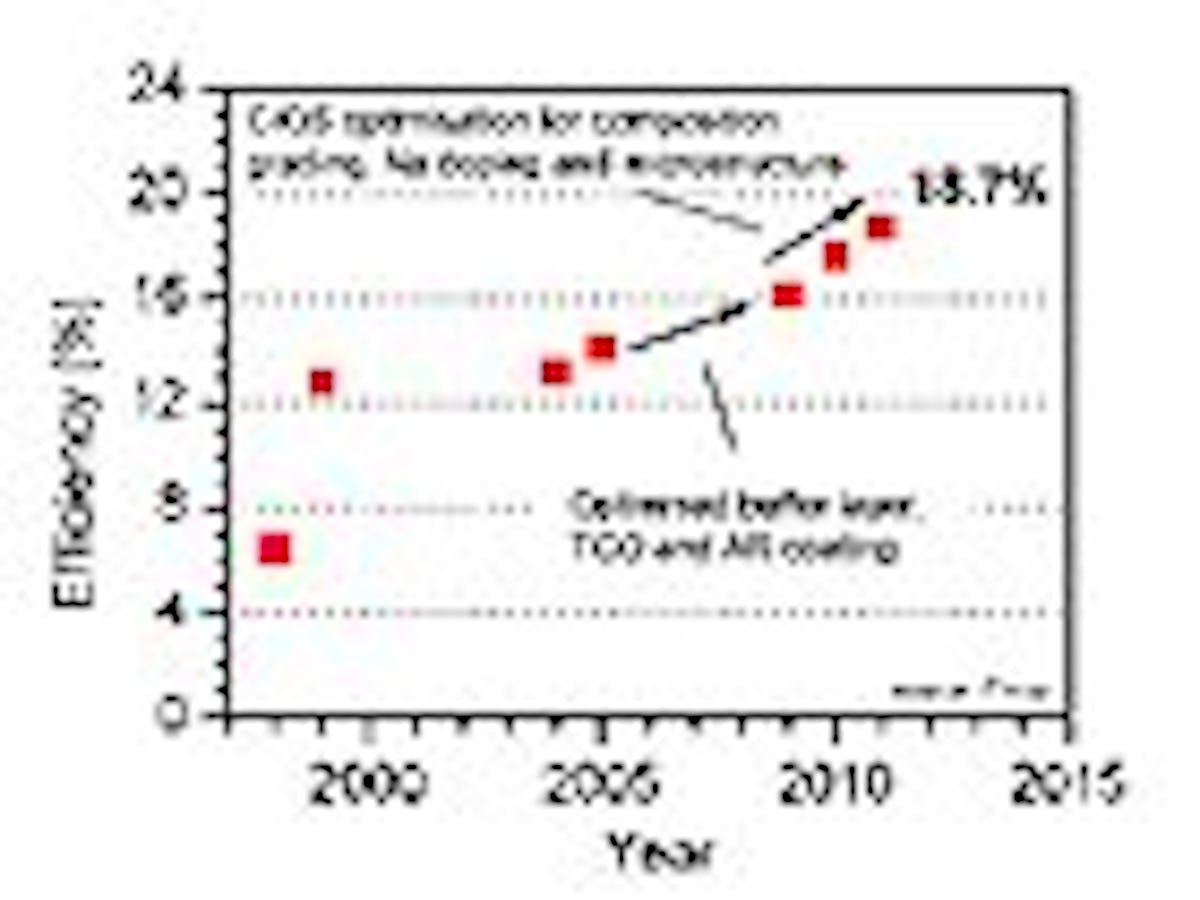 Improvement in energy conversion efficiency of flexible CIGS solar cells on polymer film.
Working closely with scientists at FLISOM, a start-up company who is scaling up and commercializing the technology, the Empa team made significant progress in low-temperature growth of CIGS layers yielding flexible CIGS cells that are ever more efficient, up from a record value of 14.1% in 2005 to the new "high score" of 18.7% for any type of flexible solar cell grown on polymer or metal foil.
The latest improvements in cell efficiency were made possible through a reduction in recombination losses by improving the structural properties of the CIGS layer and the proprietary low-temperature deposition process for growing the layers as well as in situ doping with Na during the final stage. With these results, polymer films have for the first time proven to be superior to metal foils as a carrier substrate for achieving highest efficiency.
Record efficiencies of up to 17.5% on steel foils covered with impurity diffusion barriers were so far achieved with CIGS growth processes at temperatures exceeding 550°C. However, when applied to steel foil without any diffusion barrier, the proprietary low temperature CIGS deposition process developed by Empa and FLISOM for polymer films easily matched the performance achieved with high-temperature procedure, resulting in an efficiency of 17.7%.
The results suggest that commonly used barrier coatings for detrimental impurities on metal foils would not be required. "Our results clearly show the advantages of the low-temperature CIGS deposition process for achieving highest efficiency flexible solar cells on polymer as well as metal foils", says Tiwari.
The projects were supported by the Swiss National Science Foundation (SNSF), the Commission for Technology and Innovation (CTI), the Swiss Federal Office of Energy (SFOE), EU Framework Programmes as well as by Swiss companies W.Blösch AG and FLISOM.
Scaling up production of flexible CIGS solar cells
The continuous improvement in energy conversion efficiencies of flexible CIGS solar cells is no small feat, says Empa Director Gian-Luca Bona. "What we see here is the result of an in-depth understanding of the material properties of layers and interfaces combined with an innovative process development in a systematic manner. Next, we need to transfer these innovations to industry for large scale production of low-cost solar modules to take off." Empa scientists are currently working together with FLISOM to further develop manufacturing processes and to scale up production.
Image: Flexible thin film CIGS solar cell on polymer substrate developed at Empa (Copyright: Empa)
Source: Empa
For more attend: Printed Electronics USA 2011.