Graphene gives up more of its secrets

With the advanced light source Berkeley Lab scientists explore the electronic structure of graphene in regions never before tested by experiment.

Graphene, a sheet of carbon only a single atom thick, was an object of theoretical speculation long before it was actually made. Theory predicts extraordinary properties for graphene, but testing the predictions against experimental results is often challenging.
Now researchers using the Advanced Light Source (ALS) at the U.S. Department of Energy's Lawrence Berkeley National Laboratory (Berkeley Lab) have taken an important step toward confirming that graphene is every bit as unusual as expected - perhaps even more so.
"Graphene is not a semiconductor, not an insulator, and not a metal," says David Siegel, the lead author of a paper in the Proceedings of the National Academy of Sciences (PNAS) reporting the research team's results. "It's a special kind of semimetal, with electronic properties that are even more interesting than one might suspect at first glance."
Siegel is a graduate student in Berkeley Lab's Materials Sciences Division (MSD) and a member of Alessandra Lanzara's group in the Department of Physics at the University of California at Berkeley. He and his colleagues used ALS beamline 12.0.1 to probe a specially prepared sample of graphene with ARPES (angle-resolved photoemission spectroscopy) in order to observe how undoped graphene - the intrinsic material with no extra charge carriers - behaves near the so-called "Dirac point."
The Dirac point is a unique feature of graphene's band structure. Unlike the band structure of semiconductors, for example, graphene has no band gap - no gap in energy between the electron-filled valence band and the unoccupied conduction band. In graphene these bands are represented by two cones ("Dirac cones") whose points touch, crossing linearly at the Dirac point. When the valence band of graphene is completely filled and the conduction band is completely empty, the graphene can be considered "undoped" or "charge neutral," and it is here that some of the interesting properties of graphene may be observed.
An ARPES experiment neatly measures a slice through the cones by directly plotting the kinetic energy and angle of electrons that fly out of the graphene sample when they are excited by an x‑ray beam from the ALS. A spectrum develops as these emitted electrons hit the detector screen, gradually building up a picture of the cone.
The way the electrons interact in undoped graphene is markedly different from that of a metal: the sides of the cone (or legs of the X, in an ARPES spectrum) develop a distinct inward curvature, indicating that electronic interactions are occurring at increasingly longer range - distances of up to 790 angstroms apart - and lead to greater electron velocities. These are unusual manifestations, never seen before, of a widespread phenomenon called "renormalization". 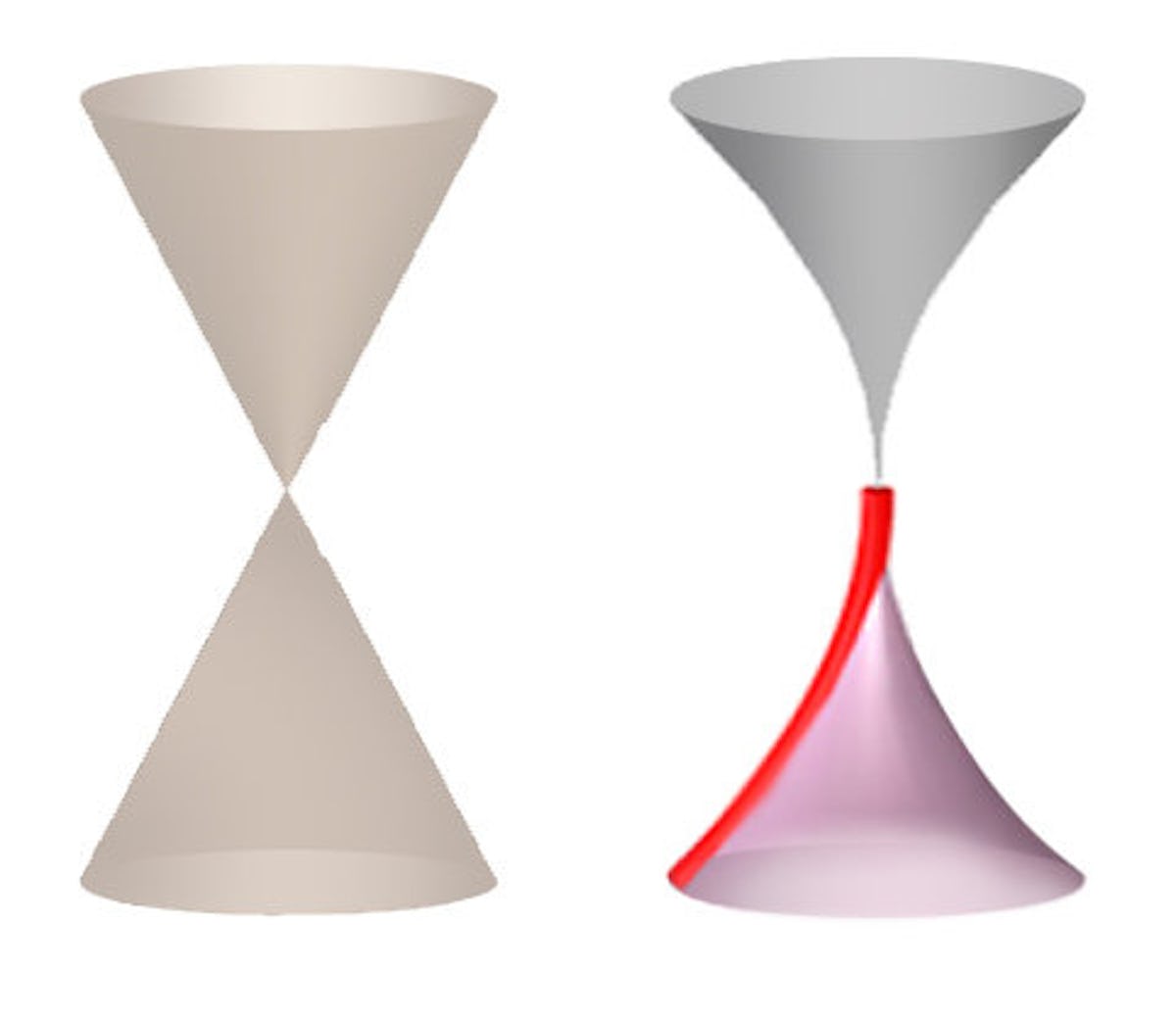 Dirac cones of graphene are often drawn with straight sides (left) indicating a smooth increase in energy, but an ARPES spectrum near the Dirac point of undoped graphene (sketched in red at right) exhibits a distinct inward curvature, indicating electronic interactions occurring at increasingly longer range and leading to greater electron velocities - one of the ways the electronics of semimetallic graphene differ from a metal's.

To understand the significance of the team's findings, it helps to start with their experimental set-up. Ideally, measurements of undoped graphene would be done with a suspended sheet of freestanding graphene. But many experiments can't be done unless the target is resting on a solid substrate, which can influence the electronic properties of the layer on the surface and interfere with the experiment.
So Siegel and his colleagues decided to investigate a special kind of "quasi-freestanding" graphene, starting with a substrate of silicon carbide. When heated, the silicon is driven out of the silicon carbide and carbon gathers on the surface as a relatively thick layer of graphite (the kind of carbon in pencil lead). But adjacent layers of graphene in the thick graphite sample are rotated with respect to one another, so that each layer in the stack behaves like a single isolated layer.
"In solid-state physics one of the most fundamental questions one can ask about a material is the nature of its charge carriers," Siegel says. "For ordinary metals, the answer can be described by the most powerful theory of solids, known as Landau's Fermi-liquid theory," after the Soviet physicist Lev Landau and the Italian and naturalized-American physicist Enrico Fermi.
While individual electrons carry charge - the electric current in a copper wire, for example - even in a metal they can't fully be understood as simple, independent particles. Because they are constantly interacting with other particles, the effects of the interactions have to be included; electrons and interactions together can be thought of as "quasiparticles," which behave much like free electrons but with different masses and velocities. These differences are derived through the mathematical process called renormalization.
Landau's Fermi liquid is made up of quasiparticles. Besides describing features of electrons plus interactions, Fermi liquids have a number of other characteristic properties, and in most materials the theory takes generally the same form. It holds that charge carriers are "dressed" by many-body interactions, which also serve to screen electrons and prevent or reduce their longer-distance interactions.
"Since the properties of so many materials are pretty much the same in a generalized way, physicists are always interested in finding systems that differ from a normal Fermi liquid," says Siegel. "This is what makes our results so exciting. Undoped graphene really does differ from what we expect for a normal Fermi liquid, and our results are in good agreement with theoretical calculations."
Perhaps the most vivid example of the difference is the long-range interaction among electrons in semimetallic graphene, interactions which would be screened in a normal metal. Siegel grants that there may be continuing controversy about how exactly graphene should be expected to behave, "but our main result is that we have confirmed the presence of these unscreened, long-range interactions, which change the behavior of quasiparticles in graphene in a fundamental way."
"Many-body interactions in quasi-freestanding graphene," by David A. Siegel, Cheol-Hwan Park, Choongyu Hwang, Jack Deslippe, Alexei V. Fedorov, Steven G. Louie, and Alessandra Lanzara, appears in Proceedings of the National Academy of Sciences, online at http://www.pnas.org/content/early/2011/06/20/1100242108.abstract. Siegel, Deslippe, Louie, and Lanzara are members of Berkeley Lab's Materials Sciences Division and the UCB Department of Physics. Park is with UCB's Department of Physics, Hwang is with the Materials Sciences Division, and Fedorov is with the Advanced Light Source. This work was supported by the National Science Foundation and the U.S. Department of Energy's Office of Science.
Main image: Undoped graphene isn't a metal, semiconductor, or insulator but a semimetal, whose unusual properties include electron-electron interactions between particles widely separated on graphene's honeycomb lattice - here suggested by an artist's impression of Feynman diagrams of such interactions. Long-range interactions, unlike those that occur only over very short distances in ordinary metals, alter the fundamental character of charge carriers in graphene. (Image by Caitlin Youngquist, Berkeley Lab Public Affairs)
Source:Berkeley Lab's Materials Sciences Division
For more attend: Printed Electronics USA 2011.