Smart skin: Electronics that stick and stretch like a temporary tattoo

Engineers have developed a device platform that combines electronic components for sensing, medical diagnostics, communications and human-machine interfaces, all on an ultrathin skin-like patch that mounts directly onto the skin with the ease, flexibility and comfort of a temporary tattoo.
Led by John A. Rogers, the Lee J. Flory-Founder professor of engineering at the University of Illinois, the researchers described their novel skin-mounted electronics in the Aug. 12 issue of the journal Science.
The circuit bends, wrinkles and stretches with the mechanical properties of skin. The researchers demonstrated their concept through a diverse array of electronic components mounted on a thin, rubbery substrate, including sensors, LEDs, transistors, radio frequency capacitors, wireless antennas, and conductive coils and solar cells for power.
"We threw everything in our bag of tricks onto that platform, and then added a few other new ideas on top of those, to show that we could make it work," said Rogers, a professor of materials science and engineering, of chemistry, of mechanical science and engineering, of bioengineering and of electrical and computer engineering. He is also affiliated with the Beckman Institute for Advanced Science and Technology, and with the Frederick Seitz Materials Research Laboratory at U. of I.
The patches are initially mounted on a thin sheet of water-soluble plastic, then laminated to the skin with water - just like applying a temporary tattoo. Alternately, the electronic components can be applied directly to a temporary tattoo itself, providing concealment for the electronics.
"We think this could be an important conceptual advance in wearable electronics, to achieve something that is almost unnoticeable to the wearer," said U. of I. electrical and computer engineering professor Todd Coleman, who co-led the multi-disciplinary team. "The technology can connect you to the physical world and the cyberworld in a very natural way that feels very comfortable."
Skin-mounted electronics have many biomedical applications, including EEG and EMG sensors to monitor nerve and muscle activity. One major advantage of skin-like circuits is that they don't require conductive gel, tape, skin-penetrating pins or bulky wires, which can be uncomfortable for the user and limit coupling efficiency. They are much more comfortable and less cumbersome than traditional electrodes and give the wearers complete freedom of movement. 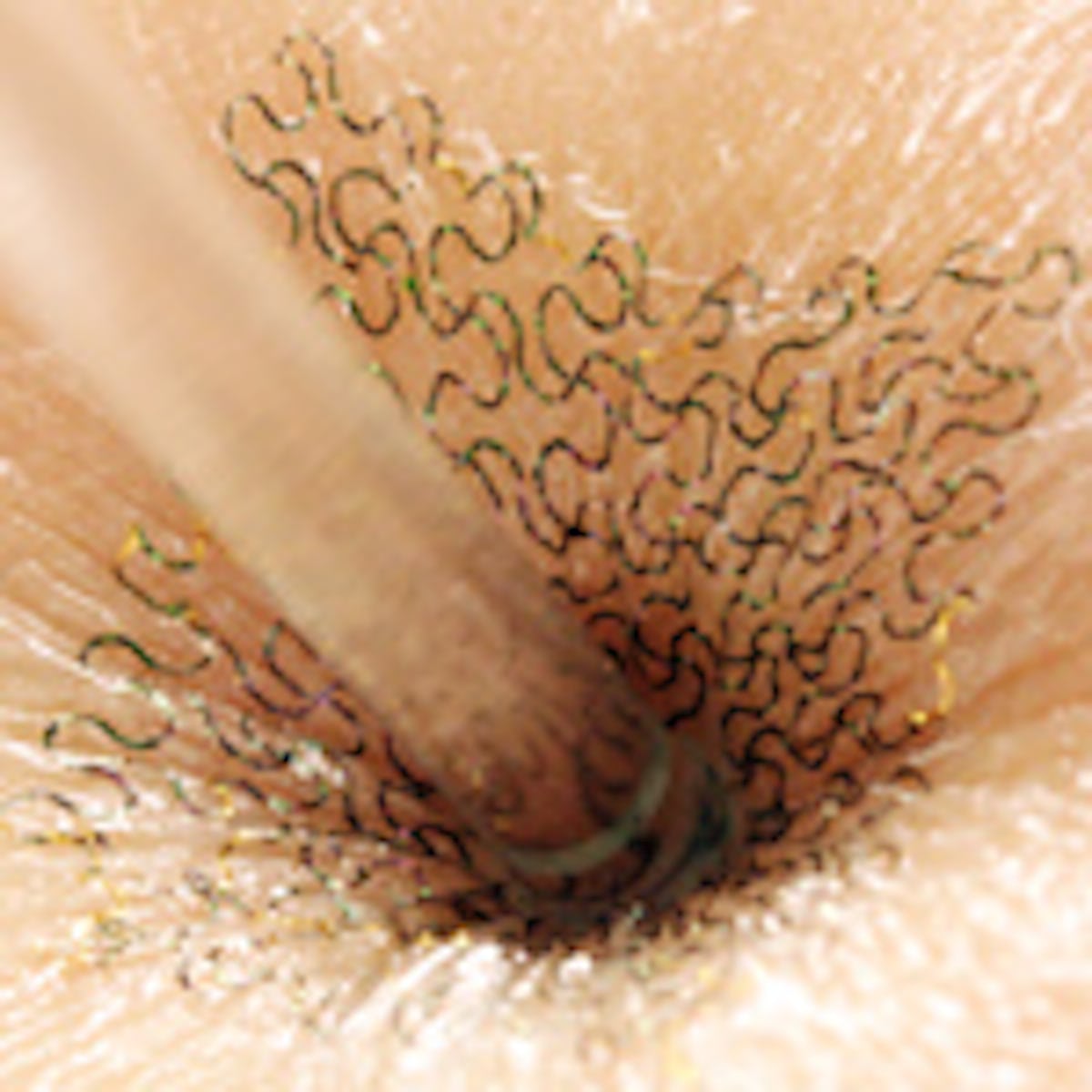 Image:skin scrunched - The circuits' filamentary serpentine shape allows them to bend, twist, scrunch and stretch while maintaining functionality. Photo courtesy John Rogers
"If we want to understand brain function in a natural environment, that's completely incompatible with EEG studies in a laboratory," said Coleman, now a professor at the University of California at San Diego. "The best way to do this is to record neural signals in natural settings, with devices that are invisible to the user."
Monitoring in a natural environment during normal activity is especially beneficial for continuous monitoring of health and wellness, cognitive state or behavioral patterns during sleep.
In addition to gathering data, skin-mounted electronics could provide the wearers with added capabilities. For example, patients with muscular or neurological disorders, such as ALS, could use them to communicate or to interface with computers. The researchers found that, when applied to the skin of the throat, the sensors could distinguish muscle movement for simple speech. The researchers have even used the electronic patches to control a video game, demonstrating the potential for human-computer interfacing.
Rogers' group is well known for its innovative stretchable, flexible devices, but creating devices that could comfortably contort with the skin required a new fabrication paradigm.
"Our previous stretchable electronic devices are not well-matched to the mechanophysiology of the skin," Rogers said. "In particular, the skin is extremely soft, by comparison, and its surface can be rough, with significant microscopic texture. These features demanded different kinds of approaches and design principles."
Rogers collaborated with Northwestern University engineering professor Yonggang Huang and his group to tackle the difficult mechanics and materials questions. The team developed a device geometry they call filamentary serpentine, in which the circuits for the various devices are fabricated as tiny, squiggled wires. When mounted on thin, soft rubber sheets, the wavy, snakelike shape allows them to bend, twist, scrunch and stretch while maintaining functionality.
"The blurring of electronics and biology is really the key point here," Huang said. "All established forms of electronics are hard, rigid. Biology is soft, elastic. It's two different worlds. This is a way to truly integrate them."
The researchers used simple adaptations of techniques used in the semiconductor industry, so the patches are easily scalable and manufacturable. The device company mc10, which Rogers co-founded, is already working to commercialize certain versions of the technology.
Next, the researchers are working to integrate the various devices mounted on the platform so that they work together as a system, rather than individually functioning devices, and to add Wi-Fi capability.
"The vision is to exploit these concepts in systems that have self-contained, integrated functionality, perhaps ultimately working in a therapeutic fashion with closed feedback control based on integrated sensors, in a coordinated manner with the body itself," Rogers said.
The National Science Foundation and the Air Force Research Laboratory supported this work.
Source:University of Illinois
For more attend: Printed Electronics USA 2011