Dressing for the future

Microsoft and fashion aren't often mentioned in the same breath - until now. In the heart of Microsoft Research is a dress that's turning heads without ever being worn on a catwalk.
"The Printing Dress," a project created by Microsoft Research's Asta Roseway and Xbox's Sheridan Martin Small, is one of the first pieces of fashion technology to emerge from the company. The women and their dress won Best Concept and Best in Show at the 15th annual International Symposium on Wearable Computers (ISWC) in San Francisco this June.
"The last thing anybody expected was for Microsoft to take those awards," says Roseway, a senior research designer for Microsoft Research. "It sends a message out that we are here, we have a presence, and we want to be just as involved in wearable technology as everyone else."
The dress is high-fashion, high-concept, and totally high-tech. It's made almost entirely of black and white rice paper. Sewn into the bodice are laser-cut buttons, reminiscent of old-fashioned typewriter keys. Though the style of the dress is old-meets-new, the rest of it is anything but old-fashioned - it comes equipped with a laptop, a projector, and four circuit boards. Everything is functional, from buttons to hem.
Though it's a prototype not meant to be worn, the dress's wearer could theoretically type messages on the bodice keyboard, and those messages would be projected onto the skirt for the world to see.
The Printing Dress is meant to explore not only fashion and wearable technology, but the notion of accountability for what we say in a world where communication is rapid, constant and increasingly done remotely, Roseway explains.
"You are probably familiar with that old saying, 'You are what you eat,' but how about 'You are what you Tweet?'" Roseway says about the dress. "The dress looks toward a future with a new realm of social accountability, where you literally wear what you Tweet. Our words aren't out there; they're on us."
The idea of accountability for communication on the Internet is something the Microsoft dressmakers talked about a lot.
"We feel like there are a lot of problems around anonymity on the internet," says Martin Small, a user experience designer for Analog Labs, which does incubation for Xbox technology.
"Both of us have seen things posted online that people would shy away from if they had to actually take responsibility for them, and it really bothered us," Small says. "It just seemed to make sense that if you had to wear the things that you said, maybe that would make a difference in how people say things, or what they choose to say to each other. You don't want to wear hateful, ugly things."

A dress that opens doors

Roseway's enthusiasm for the field of wearable technology, and for life in general, is contagious. Perhaps a starter course for becoming acquainted with Roseway is scanning the visible contents of her office- a Lady Gaga poster, a box of lasers, a bunch of dried lavender, a desk sign reading "No coffee, no workee," and a stack of cubes engraved with her name - each represents a patent she holds. One is what is now known as "winks" in messaging. 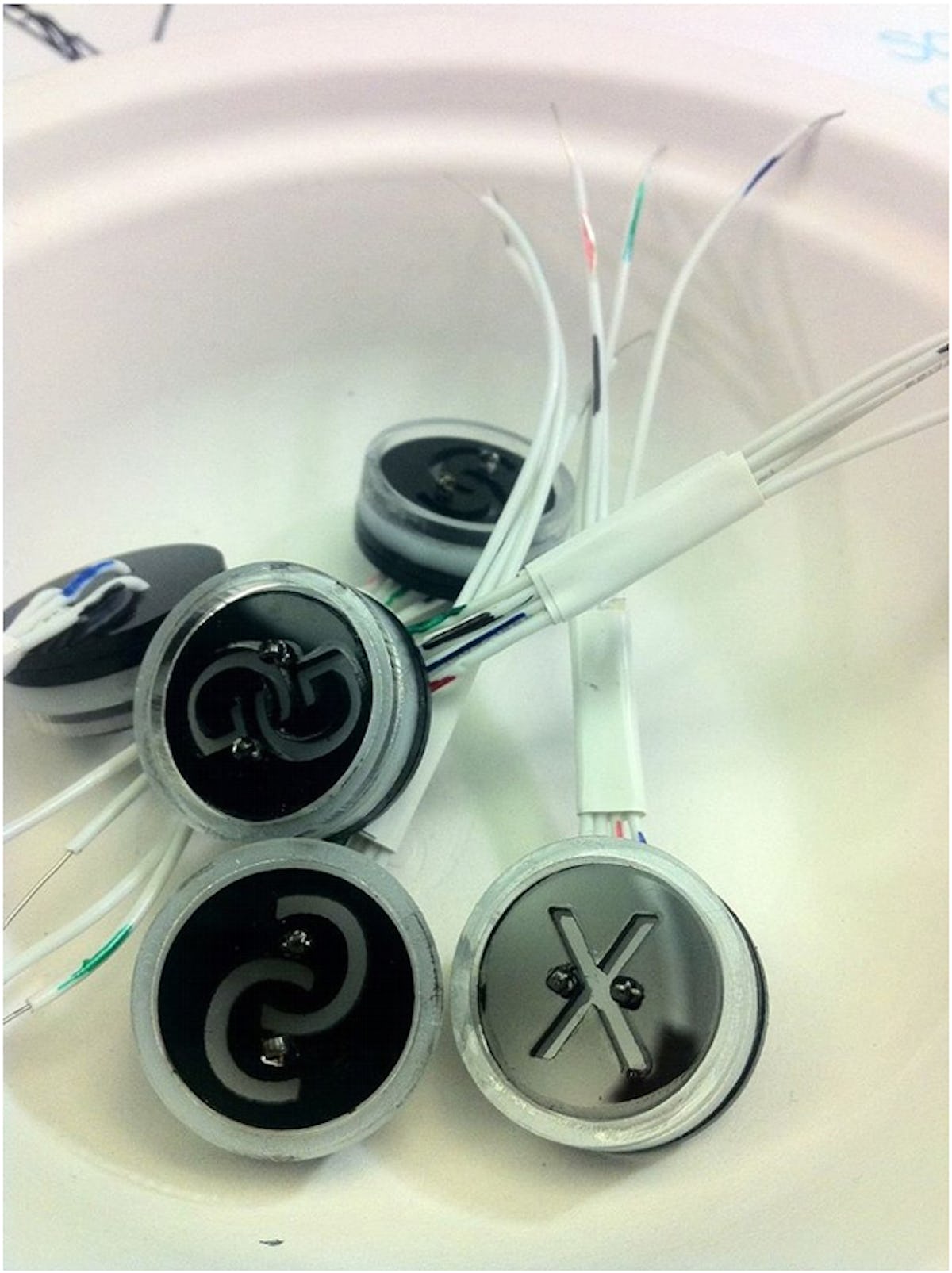 The dressmakers had help from various colleagues, including the Microsoft Research hardware team, who helped them design vintage-looking typewriter keys for the bodice.
In fact, both women behind The Printing Dress are wildly creative creatures who rarely sit still -e-Renaissance women, if you will. Roseway has a background in graphic design, studied in Paris, worked on 3D projects for Microsoft, and helped initiate the WorldWide Telescope. Martin Small has a background in fine arts, illustration, Web design, gaming, and - well, a little bit of everything.
Together, they are a creative tour de force. They were introduced a couple of years ago by a mutual friend who knew of their mutual interest in wearable technology. The two women shared what they'd been working on - Martin Small some high-tech gloves, and Roseway a pair of his-and-hers jackets that aim to digitally gauge (and aid) romantic compatibility. They also swapped ideas for potential collaborations.
In January, they heard about the International Symposium on Wearable Computers and decided to commit to entering a project - but what? They discussed bracelets, gloves, jackets, and more, but settled on a dress. Martin Small had recently created a (non-digital) paper dress dyed with tea in an art class.
"It seemed like a doable, tangible thing to create on our timeframe," Roseway says. "We said, 'Let's throw down the gauntlet.'"
After a couple of months of lunches, nights and weekends, and a fair bit of help from colleagues - including developers, Tom Blank and his Microsoft Research hardware team - the form and function of the dress started to come together.
After several revisions, in June Roseway took the finished dress to the symposium in San Francisco (Martin Small couldn't attend as she was busy at the Electronic Entertainment Expo). Roseway says she got some surprised looks that Microsoft had a wearable technology entry. Then, she herself was surprised when their dress won not only Best Concept, but Best in Show.
"The biggest win out of this dress wasn't winning at the symposium, it's the fact that it's a conversation piece now," Roseway says.
Both women say they've heard excited feedback from all corners of Microsoft; Roseway's colleagues in Microsoft Research are excitedly exploring soft displays and fabric technology. The Microsoft Research hardware team is even talking about buying a loom.
"It was hugely collaborative, which is what made it a win for everyone," Roseway says. "My hope is that it will create segues into other projects. But just the fact that so many people are now talking about wearable technology is a victory."
So, too, is the fact that it's gotten attention from fashion technology blogs like Electricfoxy, Talk2myshirt, and Ecouterre.

Why explore wearable technology? Technology has real-life ramifications, and one of Roseway's biggest fears is that without care and thought, technology will march on inflexibly and the future will be cold, hard and industrial. 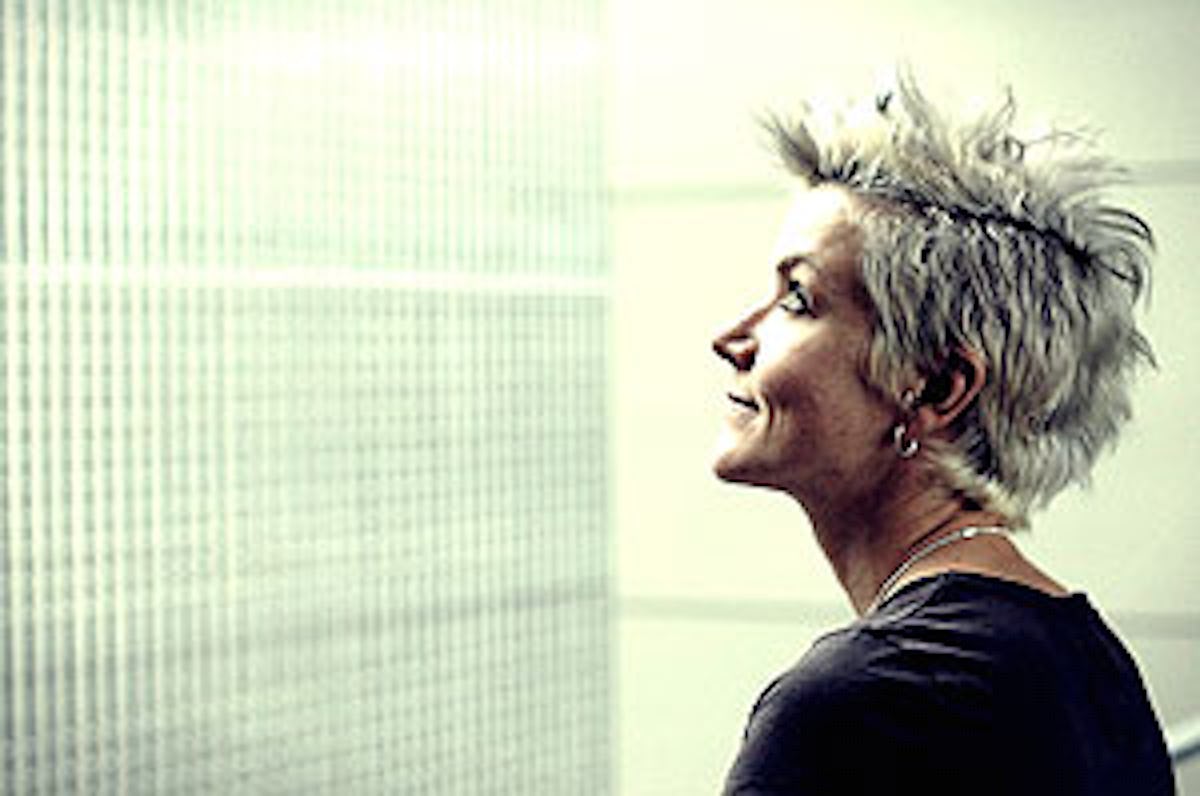 Sheridan Martin Small, one of the dress's creators, says she hopes technology is entering "the human age."
"My goal, my hope, is to see technology eventually make its way back to being human again. " Roseway says.
She worries that if people aren't paying attention, they'll be consumed by "shiny objects," the constant "sex appeal" of new technology, and become too-much-information automatons.
"Even now, people are walking around and can't even see that they're about to walk into a post. And you know what the current solution for that is? To make an augmented reality app to tell you you're going to walk into a post," says Roseway. "That's a fail!"
Technology should make things better for people, she says, not worse. It can be a layer of intelligence that lives on top of us or around us, rather than intelligence being isolated in devices.
"The technology can eventually become invisible, but the intelligence stays and is incorporated into everyday items and everyday living," Roseway says. "We're not stuck at our desks, or holding something all the time, and it's a more flexible means of accessing information."
Martin Small agrees. "The idea of being able to carry things with me without carrying things sounds amazing. And clothing that can react to the environment, or light my way when it's dark. The sky's the limit and there are a lot of areas to explore," she says.
She hosts a monthly lunch at Microsoft, where people from all over the company come to discuss wearable technology - everything from their high-tech Halloween costume ideas to researchers exploring haptics, tactile feedback technology.
"There's something really lovely and comforting about flexible circuits," she says. "There's just something about technology bending and yielding and being able to manipulate it on a human level that makes it more approachable than hard plastic."
One of the things she hears a lot working in Xbox incubation is that this is the time where we should go from humans having to understand the language of machines to machines needing to understand the language of humans.
"Talking about the future, you hear people freaking out about robot uprisings - well, maybe it's not like that," Martin Small says. "Maybe it's the human age. Maybe it's time to drop the cold, unyielding technology and replace it with things that help us connect better with each other and our world."
Main Image: Asta Roseway demonstrates the fashion and function of "The Printing Dress," a project she and employee Sheridan Martin Small created to explore wearable technology.
Source: Microsoft
For more attend: Printed Electronics USA 2011