Sandia National Laboratories will begin researching how to use glitter-sized photovoltaic cells in utility-scale solar power systems, which eventually could cut the costs of solar panels in half and nearly double their efficiency.
Sandia's work with industry, other labs and universities to improve the design, materials and manufacturing processes of the Microsystems-Enabled Photovoltaic (MEPV) cells won the national security laboratory a Federal Laboratory Consortium (FLC) Mid-Continent Regional Excellence in Technology Transfer Award.
Sandia also received FLC awards for the development of the Gemini-Scout Mine Rescue Robot and a technology transfer partnership with the University of New Mexico (UNM). The awards were presented recently in Monterey, Calif.
"These projects recognize Sandia National Laboratories' outstanding technology transfer efforts and highlight a variety of ways in which Sandia continues to make an impact, whether it is teaming with our local university on technology commercialization, providing a tool for first responders or developing a revolutionary way to collect solar power," said Jackie Kerby Moore, Sandia's manager of Technology & Economic Development.
Greg Nielson, team leader on the MEPV project, said Sandia is working with: Universal Instruments Corp. and Endicott Interconnect Technologies Inc., both in New York; New Jersey-based International Micro Industries Inc.; Albuquerque-based EMCORE Corp.; the National Renewable Energy Laboratory in Golden, Colo.; and the University of South Florida. This fall, some new partners, including California-based Deposition Sciences Inc. and the University of Delaware also will help with the project.
Together, the partners are applying commercially available manufacturing techniques to the solar cells and studying how to better produce them, including some techniques that can make them as small as two microns thick, which is about 3 percent of the diameter of a human hair. They also are researching more efficient materials and designs, Nielson said.
In October, Sandia will begin applying the glittery solar cells to large-scale solar power systems and building a prototype 1-foot-by-1-foot MEPV demonstration module, he said.
"As the cells have matured and gotten to the point where we're getting good, consistent performance, we're ready to jump into making systems," he said. "We've got these cells; now what are we going to do with them?" 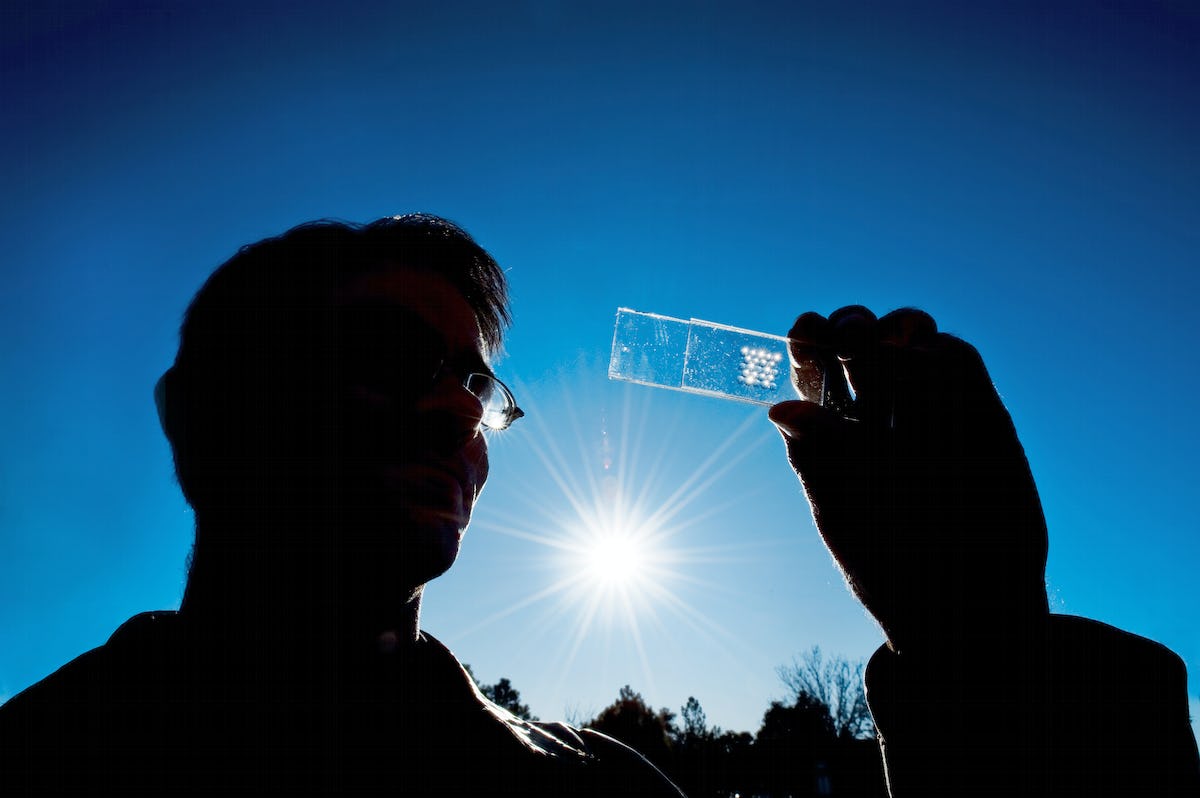 Sandia researcher Greg Nielson, team leader on the Microsystems-Enabled Photovoltaic cell project, holds up a sample of the cells that won a regional Excellence in Technology Transfer Award from the Federal Laboratory Consortium (FLC). (Photo by Randy Montoya)
The new MEPV solar power systems based on single-junction cells are estimated to be up to 20 percent efficient, meaning they capture a fifth of the sun's energy, and could cost $1.80 per watt-peak, a way of rating a photovoltaic system that measures how many watts a panel produces when sunlight is at its peak, Nielson said. The preliminary cost estimate includes an 18 percent profit margin and the costs of manufacturing, labor, permits and racking and wiring for installation.
Today, the low-end cost of installing a traditional utility-scale solar system is about $4 per watt-peak, Nielson said.
While preliminary cost estimates for the single-junction MEPV system are competitive with what consumers pay for electricity from the grid now, Nielson hopes the cost can be cut and the efficiency increased even further with innovations that take advantage of technologies developed in the last 10-15 years.
Those being studied include: moving from single - to multi-junction cells to increase system efficiency up to a goal of 40 percent by utilizing different wavelengths of light; concentrating sunlight to decrease the amount of solar-cell area needed to produce the same amount of energy; better managing the cells' thermal output; placing the cells in a series to increase the module's voltage; placing the inverter directly into the module to reduce installation costs; and decreasing how precise the sun-tracking hardware needs to be to capture the sun's energy, thus decreasing the cost of the modules' tracking hardware, Nielson said.
Nielson said a prototype MEPV solar power system could be built in about two years, but modules for utilities or individual buildings will likely take at least seven years to reach commercial markets, due to rigorous reliability and safety testing requirements. However, consumers could have access to flexible MEPV power devices built into tents, clothing or electrical gadgets, in a few years, he said.
The companies that have taken on the challenging manufacturing and research projects, have "been a big help in advancing certain aspects of the technology, while the more advanced technology of the photovoltaic cells Sandia has done," Nielson said.
Sandia's other two FLC awards include:
The winners were selected from an FLC region that is home to more than 100 federal laboratories in 14 states: Arkansas, Colorado, Iowa, Kansas, Missouri, Montana, Nebraska, New Mexico, North Dakota, Oklahoma, South Dakota, Texas, Utah and Wyoming.
"The reason we believe we can get the prices down is we're taking a completely different approach to the photovoltaic systems and that's based on the MEPV cells. It's a direction that the industry has not taken at all," he said.
Sandia National Laboratories is a multiprogram laboratory operated by Sandia Corporation, a wholly owned subsidiary of Lockheed Martin Corporation, for the U.S. Department of Energy's National Nuclear Security Administration. With main facilities in Albuquerque, N.M., and Livermore, Calif., Sandia has major R&D responsibilities in national security, energy and environmental technologies, and economic competitiveness.
Main Image: The Gemini-Scout Mine Rescue Robot which won the regional Notable Technology Development Award from the FLC. (Photo by Randy Montoya)
Source: Sandia Corporation
For more attend: Printed Electronics USA 2011.
For more read: Thin Film Photovoltaics and Batteries 2011-2021.