Pushing the envelope on paper-based diagnostics

Is it malaria, dengue fever, or the flu? Or maybe none of the above. For people miles from a lab, diagnosing an illness is a major challenge.
Paul Yager, chair of the Bioengineering Department at the University of Washington, leads several subcontractors in two major grants totaling up to $26 million pushing the envelope on paper-based diagnostics. Their hope is that in two to three years, people miles from a lab will be able to cough, spit, or urinate on a piece of paper, upload the image on a cell phone and get lab-quality results for a range of illnesses. 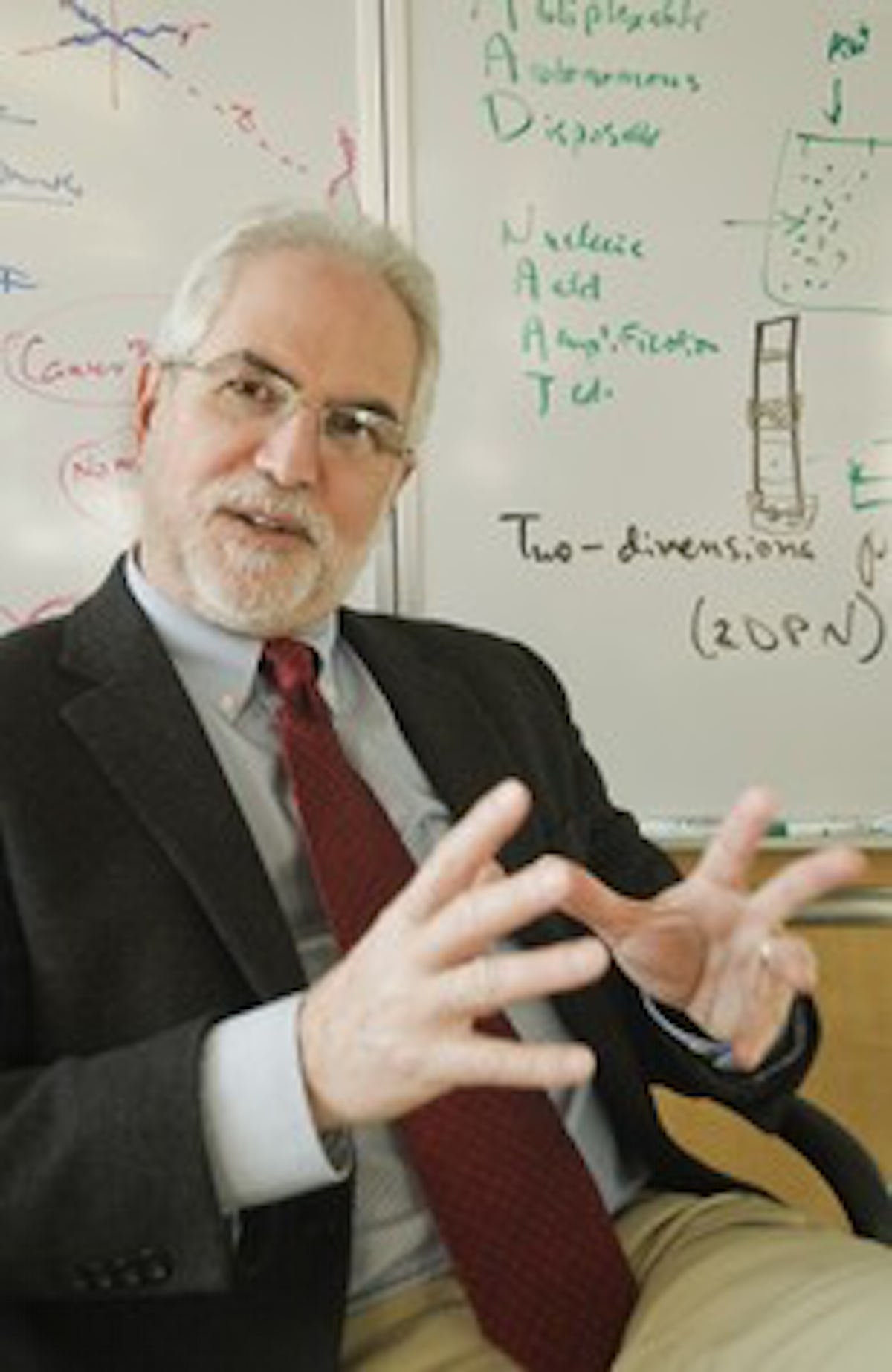 Dr. Paul Yager is creating a future when diagnostic testing can take place on a piece of paper, and results sent by cell phone.
"Imagine what could happen if you knew what kind of virus you had," said Yager. "You would know whether you needed to go to the hospital or just go to bed."
The Department of Defense's Defense Advanced Research Projects Agency (DARPA) - the same agency that helped launch the Internet - envisions the day when soldiers in the field can have pocket diagnostics. DARPA's first award to Yager's team is for $4 million for 18 months. If the agency feels the team is on the right track, it will give them another $16 million.
The National Institutes of Health also awarded Yager and his partners $5.7M to explore paper-based diagnostics for a more effective test of influenza. Yager said existing influenza tests aren't sensitive enough.
Yager said the code name for the technology that he and his colleagues (including research assistant professors Barry Lutz and Elain Fu, biochemistry professor David Baker, Seattle Children's, PATH, Epoch Biosciences and General Electric Global Research) are developing is the "two-dimensional paper network or 2DPN." It's the next evolution of Yager's "lab on a chip" technology developed with a $15m grant from the Gates Foundation.
Other researchers are working paper-based diagnostics as well , but Yager's team - one of the leaders in this field -- is focused on not only widening the number of tests people can do but expanding the capabilities of paper-based tests to bring their sophistication and sensitivity up to what can be achieved in U.S. laboratories. 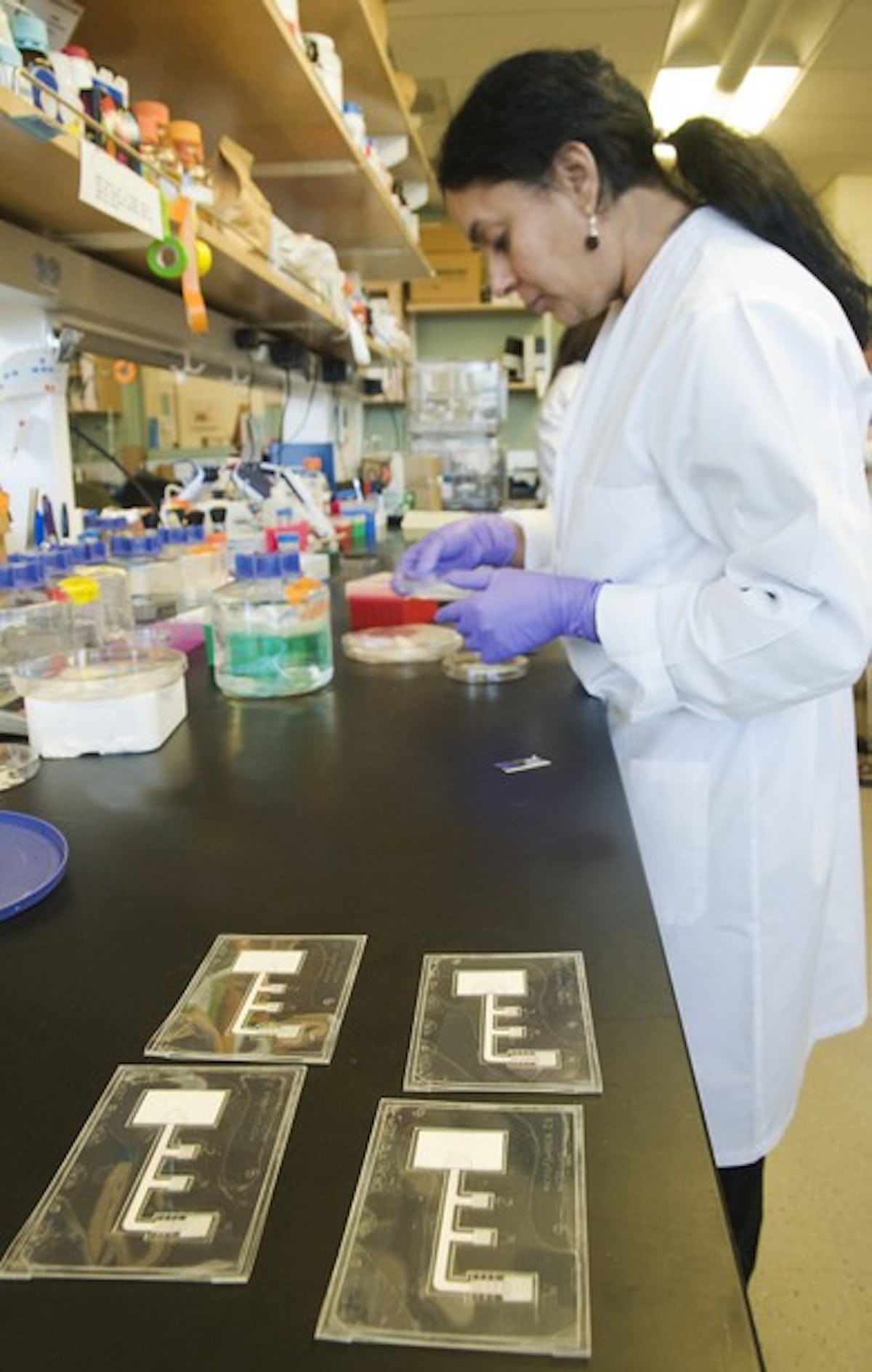 Researchers in this UW lab are working toward paper versions of infectious disease diagnostic tests.
The goal is to make diagnosing a range of illnesses as simple as a pregnancy test without having a high concentration of the virus and without costing too much - a tall order.
The UW team is not inventing any new chemical processes—just ways to implement them that make them radically simpler and cheaper. There are two main sensing technologies in common use today for medical testing—immunoassays, which have already been put onto inexpensive paper tests (but that are relatively insensitive) and nucleic acid amplification tests, which are very sensitive, but (to date) are only performed at great expense in sophisticated laboratories. The gold standard in nucleic acid testing is the polymerase chain reaction (PCR), which can amplify even a single copy of pathogen DNA using thermal cycling -- heating and cooling the samples.
Yager's team is developing a paper version of PCR amplification testing that runs at a single temperature and turns the presence of a pathogen into a pattern of color dots. The dots can be imaged using a camera on a smart phone. Software can then interpret the pattern of dots to identify the pathogen, and even suggest a therapy to the user.
Already, Yager's lab team has proven that it could produce upgraded immunoassays, such as the common urine-based pregnancy test.
Earlier in November, postdoctoral student Anupama Govindarajan, Karl F. Bohringer, professor of electrical engineering, Sujatha Ramachandran, professional staff in bioengineering, Yager, and others, published their development of a very low cost paper microfluidic device for point-of-care extraction of bacterial DNA from raw, viscous patient specimens, like sputum. The system is activated by folding the paper into a little box. The researchers have dubbed it "microfluidic origami." Govindarajan led the project.
The device can run without the use of external power, and stores the chemical reagents dry, making the devices safer to transport and handle. The sample is prepared simply by adding, water, ethanol and elute buffer to the device. DNA can be extracted even from samples with only a tiny bacterial load. The test takes one-and-a half hour to run cold, or one hour using an oven or heater block.

Folding activates the origami paper lab to test sputum samples for disease bacteria.
The developments noted that the paper "microfluidic origami" lab can be fabricated in high volumes in the developing world without a semiconductor clean room or a microfabrication facility. Testing for tuberculosis in remote areas would be one of its uses.
Watch a video by the Bohringer lab showing the testing device in action.
http://www.youtube.com/watch?v=Zg2Rygs1WYE&feature=youtu.be
Another part of the group's approach is to replace costly antibodies -- proteins used by the immune system to identify foreign objects like bacteria and viruses.
"We'd like to avoid the tyranny of the antibody, so we are exploring other alternatives," Yager said. "The goal is to make these tests at $1 and available worldwide."
UW Biochemistry's David Baker, a member of the team, is exploring novel small binding molecules that could be better and cheaper.
"His technique also has the potential to be as cheap as dirt," said Yager.
Partners on both grants include PATH and Seattle Children's. PATH will be exploring assay development and a chemical process that generates heat much like hand warmers to heat up samples without use of a power chord or battery. Seattle's Children's will be providing the samples.
The Defense Department grant also includes Epoch Biosciences in Bothell, which will develop nucleic acid-based tests for the 2DPNs and hopes to commercialize the tests.
Both grants also include General Electric Global Research; GE owns a paper company that is interested in the advancing the state-of-the-art in their existing assay paper products and could be a distributor of the final tests.
While the process of developing this low-cost test is quite complex, the payoffs could be huge.
When asked what the impact worldwide could be, Yager simply said: "Not small."
Main Image: A close up of a hand-held diagnostic lab prototype.
Source: University of Washington
For more attend: Printed Electronics USA 2011