Heliatek GmbH inaugurated its first production facility for the manufacture of flexible organic solar panels in Dresden during a ceremony attended by the Prime Minister of Saxony, Stanislaw Tillich.
Based on organic semiconductor materials, the flexible solar panels offer greater freedom of use than conventional photovoltaic products. The company has invested €14 million in the construction of this first production line and has created over 75 new jobs in recent years.
Heliatek developed the world's first manufacturing line producing organic solar panels in a roll-to-roll process using vacuum deposition at low temperatures - a process that holds excellent potential for significantly reducing costs in mass production. While other organic manufacturers rely on printing processes, Heliatek is the only company in the world that specializes in solar panel manufacture using vacuum deposition of small molecules (oligomers) on flexible film. 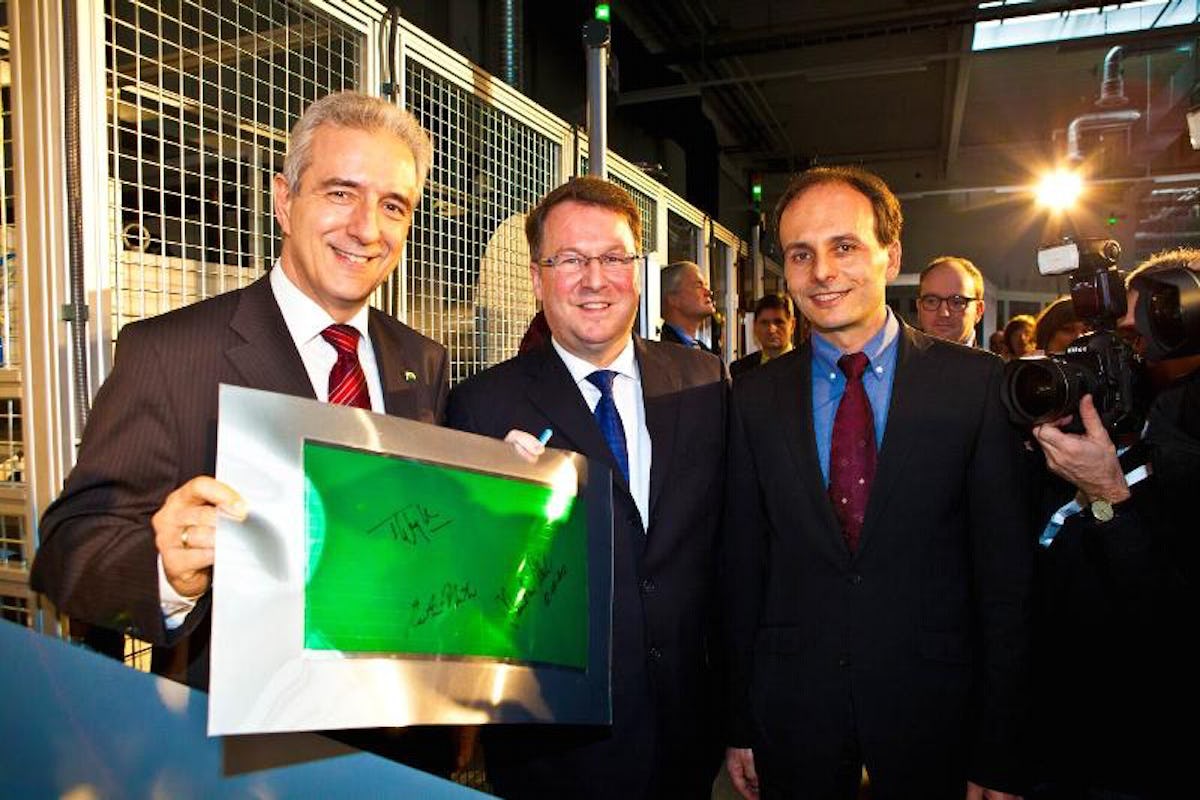 (Left to right) Prime Minister Tillich, Thibaud Le Séguillon (Heliatek CEO) and Dr Martin Pfeiffer (Heliatek CTO)
Thibaud Le Séguillon, CEO of Heliatek GmbH, said, "After a construction period of less than six months of this proof-of-concept production line, we have achieved an important milestone on our way to the commercialization of organic solar films based on small molecules. Now comes process integration. Heliatek will roll out its organic solar film for "Energy-2-Go" applications in the fall of 2012. Key product features will allow us to take truly green solar power everywhere it's needed. At the next step, the first volume market will be BIPV. To support this strategy, we plan to close another round of financing this year, during which we should raise €50 million from current and new investors for an additional production line."
Current investors involved in Heliatek's success are large industrial and financial companies, including BASF Venture Capital, Bosch, Innogy Venture Capital (RWE), and Wellington Partners. Thanks to these investors, Heliatek enjoys broad support throughout the entire value added chain ranging from chemical research and engineering and process design to securing distribution and capital in the energy and financial markets. Joint research and development activities facilitate the reciprocal exchange of experience and knowledge, from which all partners benefit.
The panels are ultra-thin and light-weight, weighing in at only 500 grams per square meter.
Source: www.heliatek.com