In the USA, much of the printing industry is in free fall as a result of the internet and changing lifestyles. For example, the young prefer television, the i-pod and the computer to the newspaper or magazine. There is some growth in sectors of the packaging industry such as polyester packaging and in the labelling industry in the form of self-adhesive labels but neither of these industries is particularly prosperous either. Printing spans them all. For example, only 5% of barcodes are created in the form of labels any more. Instead of the label industry providing a barcode applied to packaging and products, the barcode is now printed directly at almost zero cost when other printing takes place. Feeble pickings there for the industry.
So are the centuries of sophisticated development of the science and production technology for printing ending in a whimper? Are the ink makers, machinery suppliers and others variously specialising in flexo, litho, ink jet, screen, gravure and other technologies looking like the steam engine experts of one hundred years ago? The answer is probably not. Certainly there is a fascinating escape route opening up for some. It is the printing of electronics, notably RFID for food and livestock traceability, the largest potential market for RFID in the world. There is also scope for printing other devices involved in tracking, tracing and identifying food and livestock such as sensors of overheating, opening, wetting etc and the potential self adjusting sell by and use by date - a label that records time temperature profile and clearly shows an adjusted date in printed alphanumerics, possible with warning words.

The argument goes like this. The silicon chip is the clever bit of almost everything electronic. It subsumes transistors, diodes and many other small components and the myriad of wires, connections and therefore failure modes previously involved. By making the features on the chip smaller and smaller, more and more complexity can be provided with little or no increase in cost. However, the silicon chip has subsumed all it can and that means that it has to be connected in the good old fashioned way to large components such as displays, batteries, actuators, antennas and even the larger capacitors and resistors. This is all with added cost and plenty of failure modes in the interconnects. Indeed, the size of the finished device exhibits no benefit from the smallness of the chip and that may mean it is too large for the required purpose such as smart packaging.
There is more. The cost of the simplest silicon chips has not changed for decades and the exponential increase in cost of chip making factories - now three billion dollars each - and of the cost of supporting research and development bodes ill for the future. We need disposable thin electronics for a myriad of things from smart skin patches that deliver drugs without error, disposable blood, insulin and pregnancy testers with clear human interfaces, self-adjusting use by dates that take note of whether we opened and/ or heated the food or medicine, wallpaper television, controllable wallpaper lighting and so on. It would be safer if the whole of the outside of a car glowed in the dark and that surface doubled as large indicator lights and so on. The laminate across the whole of the outside of the car could all flash red in an emergency, having stored its power from the sun. The silicon chip is a poor route to all of this. While silicon chips are used for energy production in the form of photovoltaic panels, these brittle structures are not leading to the kilometres of low cost electricity generating tape we need down motorways and on buildings. In short, we need much cheaper, more flexible, thinner electronics and electrics combined. We need printers.
It is true that making silicon chips involves so-called photolithography but that is an optical and etching technology that has nothing worthwhile in common with the printer's reel to reel lithographic process. The new form of electronics and electrics commonly called printed electronics involves modification of existing forms of flat bed, ink jet and rotary printing. All the traditional skills are dearly needed so we can truly have pervasive electronics in our clothing, packaging, books, medical treatment and much more besides. Printed electronics will kick the silicon chip out of the talking gift card as well as the discrete components and wires to which it is attached. But that is the least of what it will do. The film Minority Report showed it giving us the moving colour display and voice over on the cornflake packet. Interactive games on disposable paper packaging have already been demonstrated in real life but more serious uses will also drive printed electronics forward.
So how is it progressing and how is the printing industry getting involved? The table below gives some examples including large flexible moving colour billboards that replace conventional printing with something more compelling. Later the same will occur with most packaging. The printing industry therefore has both carrot and stick to make it take an interest in these new applications of printing. 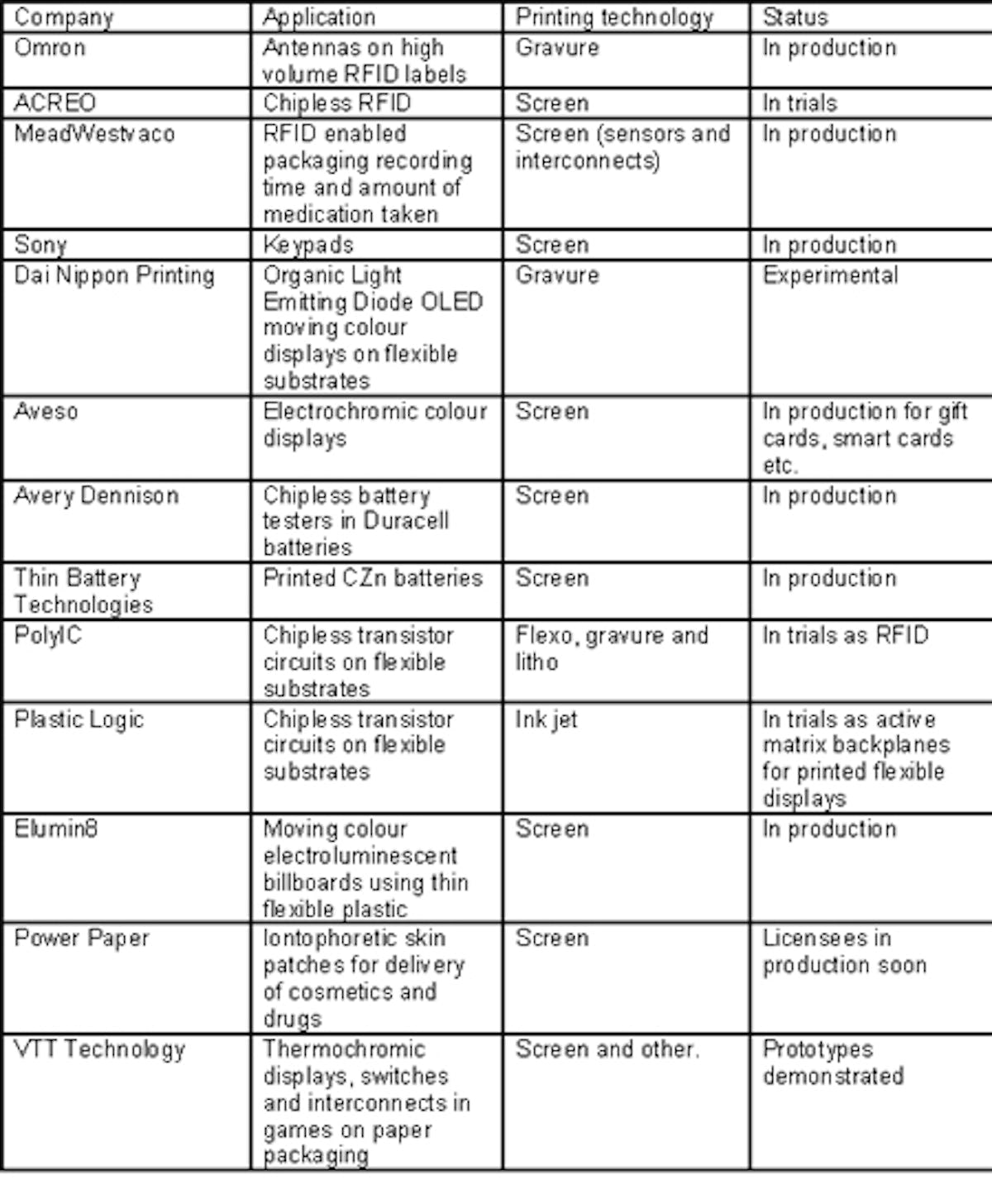 Source: IDTechEx
Aveso flexible printed electrochromic display with printed interconnects and battery. The logic is a silicon chip until the printed alternative is available. 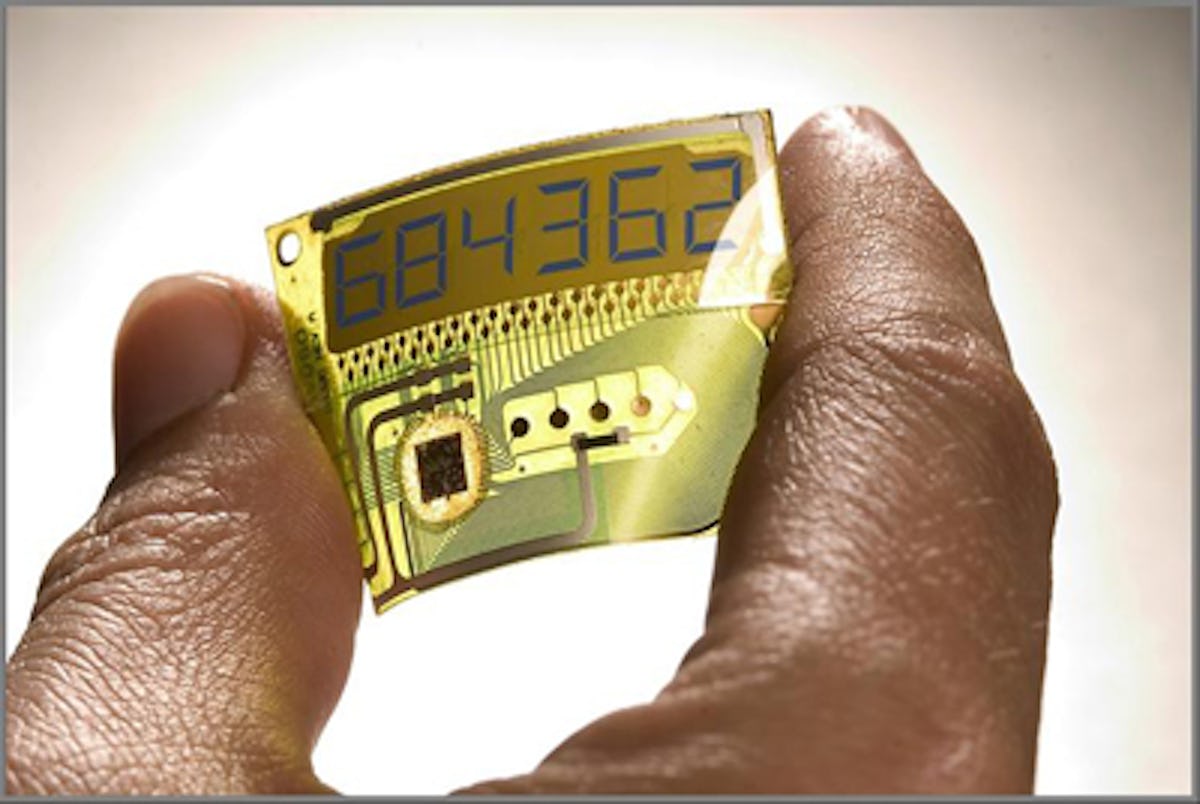 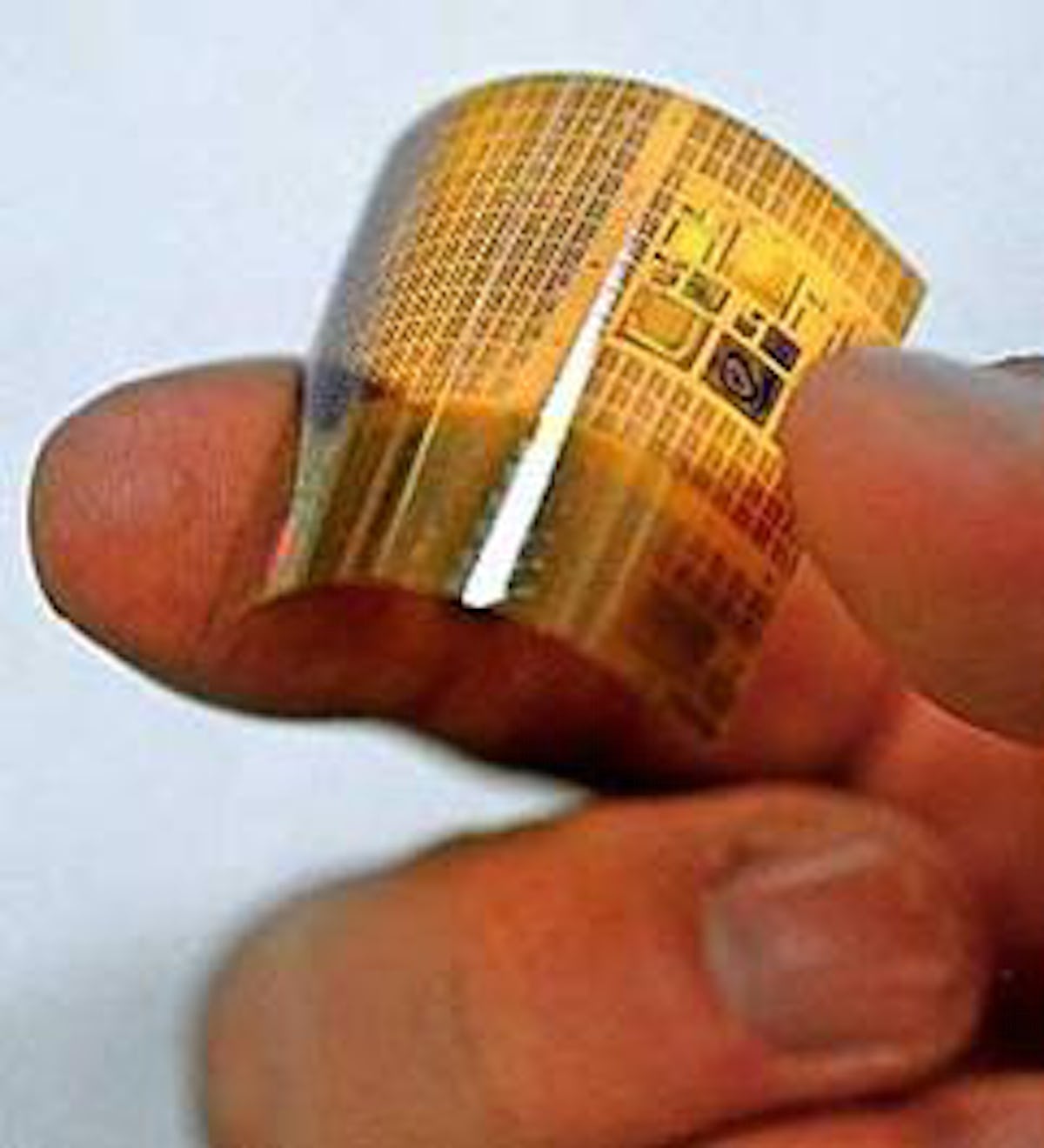 Source Thin Film Electronics AB
In most of these cases we are talking about many passes of very different new inks such as fine silver conductors, ceramic dielectrics, copper doped phosphors, and both organic and inorganic semiconductors and passivation layers. Low temperature curing, better definition, thinner layers and continuity are among the challenges. However, well over ten billion such constructions, mostly on polyester film or paper, have already been sold and the potential goes all the way up to ten trillion barcodes being replaced with printed chipless RFID every year. Yes, the barcode replacements will mainly be printed directly onto things - the money will not stretch to labels in those volumes.
Below is the IDTechEx projection for the global market for RFID in 2016 in billions of dollars with the impact of printing technology 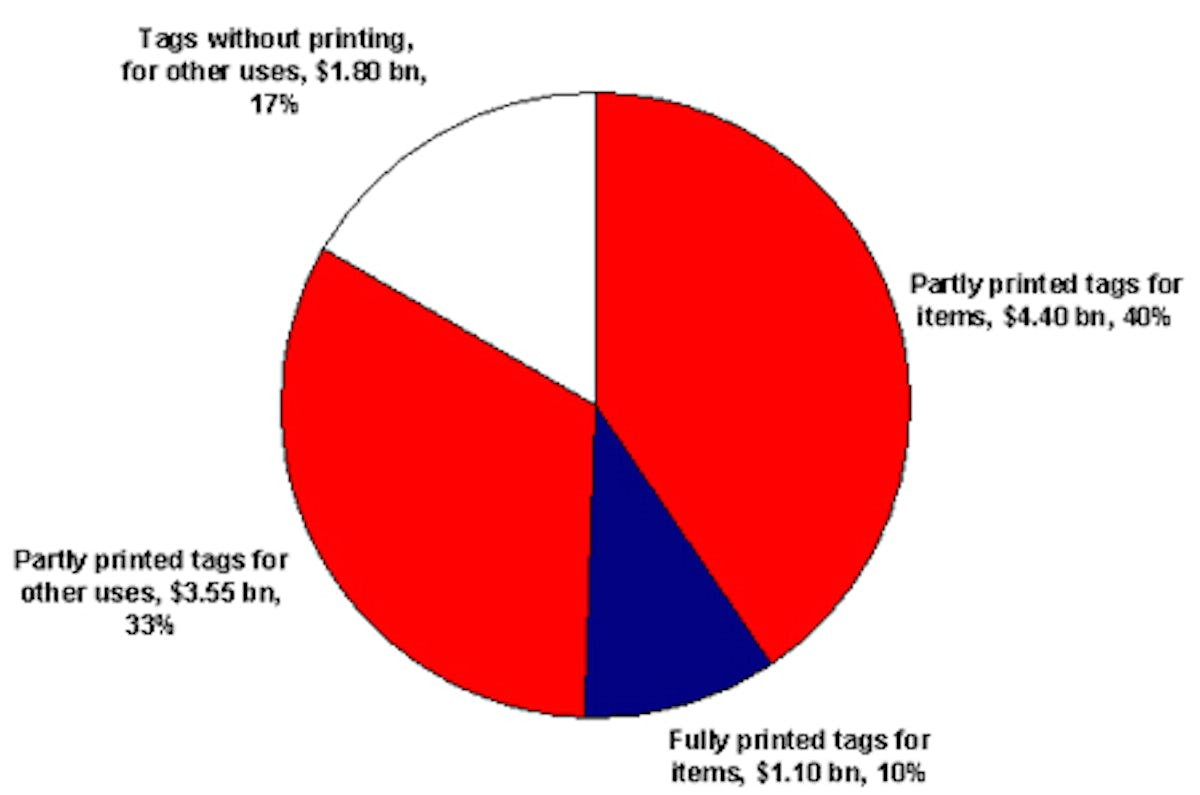 Food traceability is by far the biggest potential market for RFID, not least in replacing trillions of barcodes yearly with something more readable and versatile. All those developing printed RFID have their eyes on that. However, there are even specialists emerging that target livestock with what could be a lower cost printed alternative to the current two dollar chip-based tags, usually containing expensive wound copper wire as well.

Somark Innovations is a biotechnology firm that has developed an identification and tracking system which utilizes a unique biocompatible material ( U.S. Patent Pending) that possesses RFID-like functionality without the physical microchip or antenna. (RFID = Radio Frequency Identification) The technology possesses a material that has already received FDA approval and can be leveraged to identify and track animals, humans or retail products. In response to the 2003 Mad Cow Disease and billions of dollars in lost trade, the USDA has mandated a National Animal Identification System (NAIS) effective January 2009 to identify and track cattle. Although the technology is applicable to numerous industries, Somark will initially focus on the government mandated livestock market. Somark is expecting approval for a Phase I SBIR grant of $80,000 from the USDA for initial research. The company is currently seeking an initial equity investment to complete Phase I of Research and Development, i.e. an ink prototype. The R&D strategy should achieve a market ready state within 15-20 months and bring the company to its first customer, Joplin Stockyards in Carthage, Missouri. To date, the company possesses a proof of concept demo that illustrates a chipless material detected via radio waves without line of sight.
For more attend RFID Smart Labels USA March 28-29 www.smartlabelsUSA.com

The IDTechEx conference Food Traceability 2006, held on February 1-2 2006 in Dallas, USA, was a great success with attendance from 13 countries. There was a consensus that track, trace and identify are merging as both sciences and needs. Requirements and executions before and after the farm gate are also becoming seamless. These barriers are rapidly breaking down. New sources of data such as RFID, 2D barcodes and widespread DNA analysis are creating a challenge in the sheer volume of data generated. www.trackingfood.com

Miss the event? Don't miss out! Purchase the presentations and audio records at www.trackingfood.com

You can also read the new IDTechEx reports: