Many of those aggressive forecasts for wireless sensors everywhere will depend on finding better ways to put sensors on non-traditional materials, and on finding ways to power them with non-traditional sources that cost less and last longer.
Like most applications for printed/flexible electronics, that means either improving the performance of the solution-processed materials, or finding ways to make more conventional vacuum-processed products flexible or cheaper.
One of the most interesting hybrid approaches to getting silicon-like performance on flexible substrates is to actually embed silicon die. Meanwhile, both improved polymer materials and lower cost thin-film processes vie for the integrated rechargeable battery slot.

Cambridge, Mass.-based startup, MC10, aims to change the way we use electronics through the use of ultra-thin silicon die and interconnects on flexible and stretchable substrates. The company has developed flexible and stretchable capabilities that preserve the performance of silicon while enabling new form factors that can be bent or stretched to conform to soft and irregular surfaces, reports senior product engineer Brian Elolampi. Elolampi will discuss how the platform uses standard semiconductor industry processes and tools for cost-competitive economics at the upcoming SEMICON West 2012 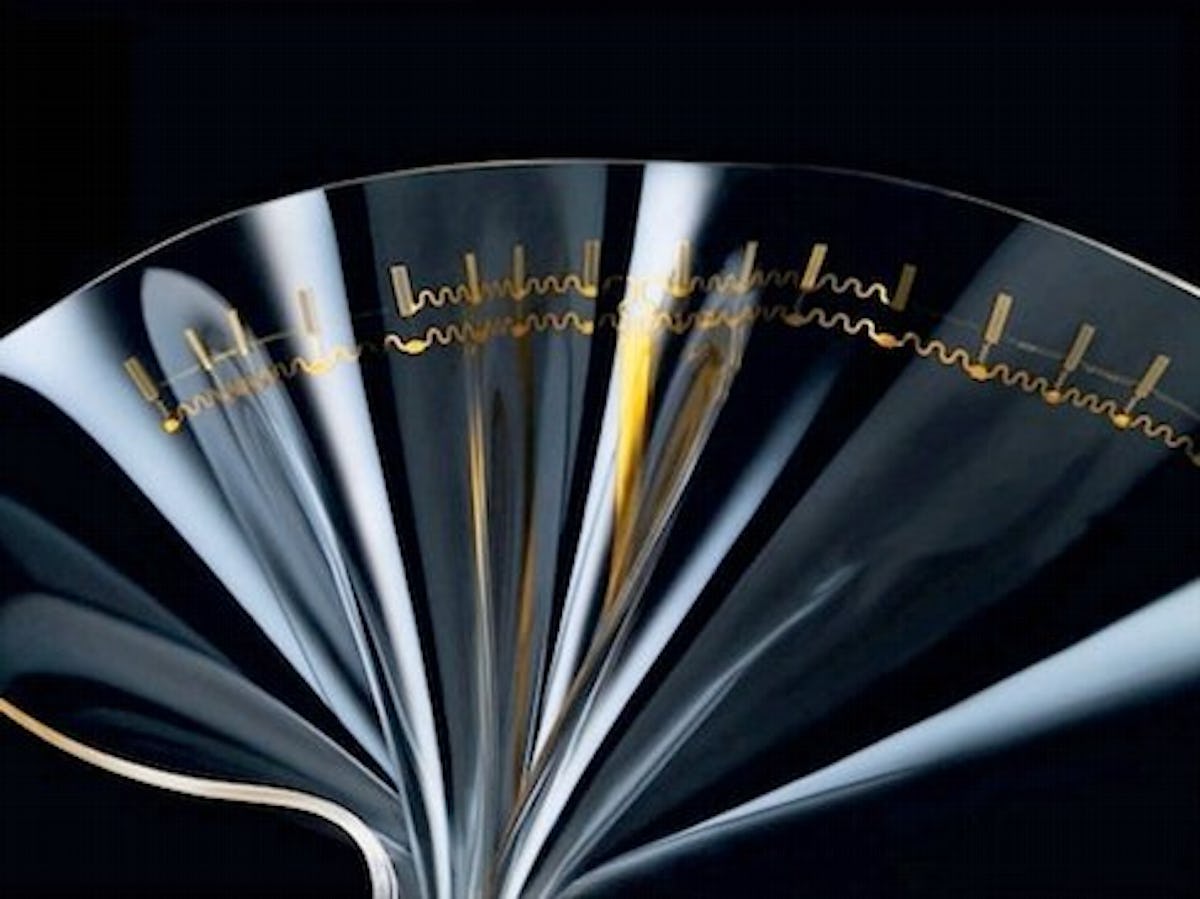 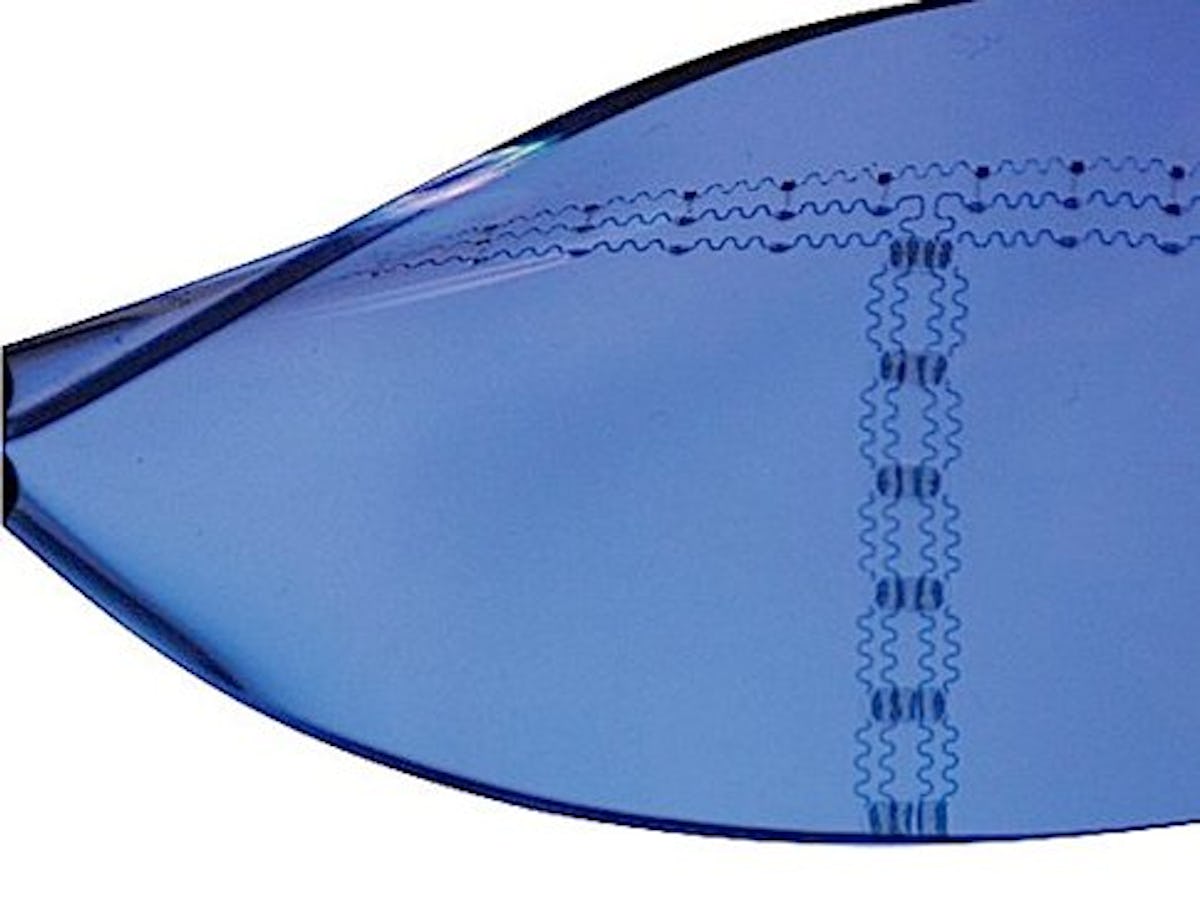 Photo: MC10
MC10 thins the silicon die to a flexible10µm-30µm, then transfers islands of thin silicon to polymeric substrates by a pick and place process. The silicon die can be thinned by traditional polishing, or by trenching around the die by DRIE and then undercutting the die with wet or vapor etch. The thin die are interconnected by serpentine shapes in the metallization, allowing the wiring to stretch and bend. MC10 then sandwiches the die and interconnects into flexible polymers, layering more rigid polymers directly around the die and softer polymers in the outer layers to protect the chips while enabling flexibility in the system. 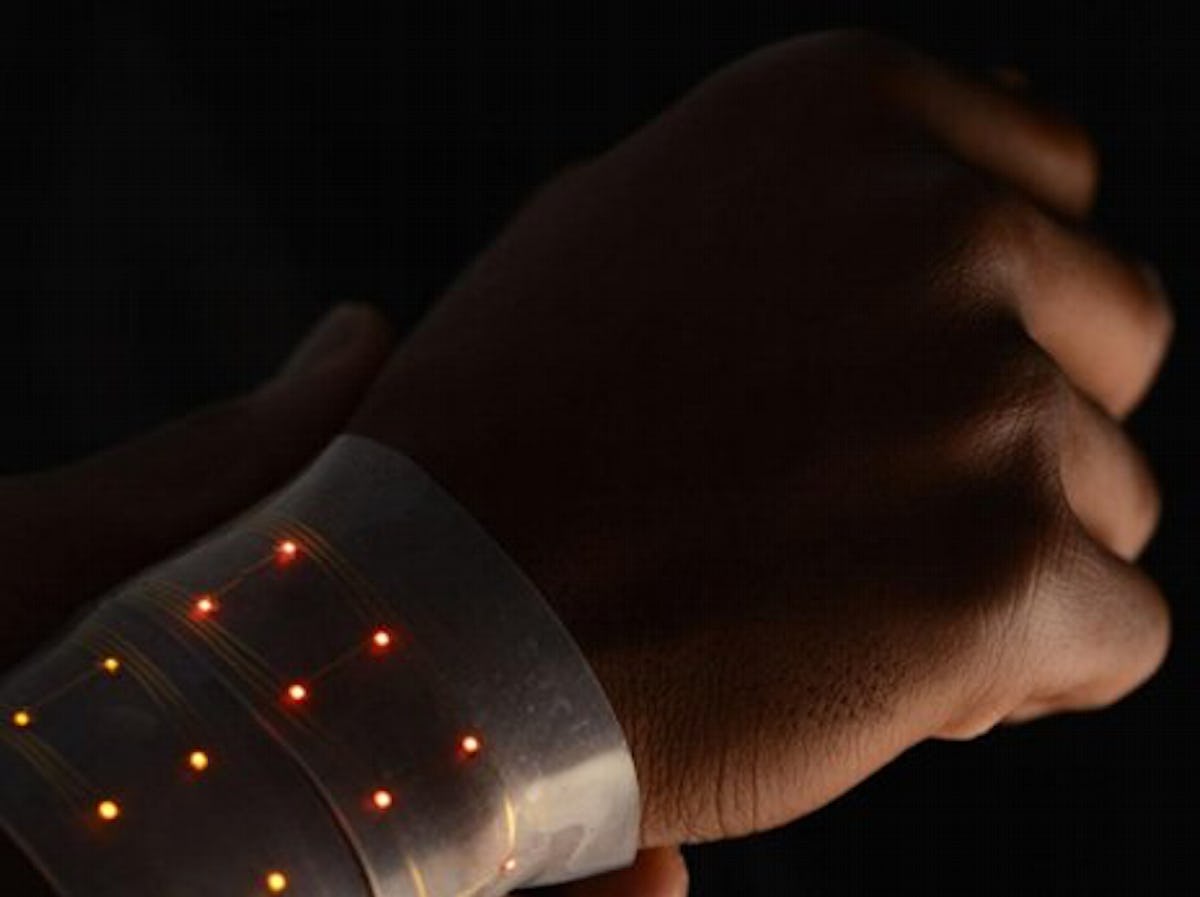 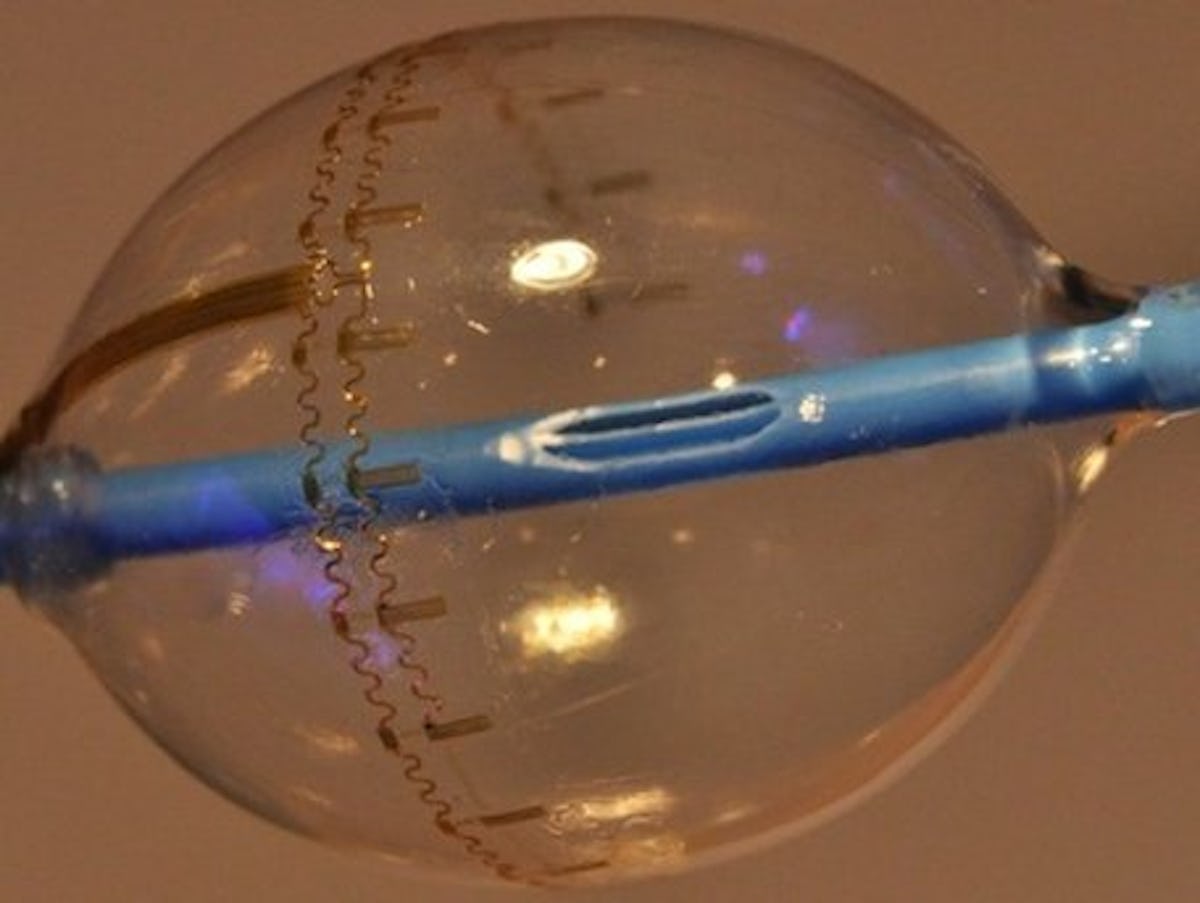 Photo: MC10
The company initially focuses on developing conformal wearable sensors and monitors for health and fitness applications. It is jointly developing a wearable monitoring device with Reebok, targeted for release later this year. MC10 is also developing a number of other sensing devices for use in healthcare, including an electronic tattoo for monitoring heart rate, oxygen levels, EKG or EMG, and sensors that can be used inside the body on the tip of a catheter or on implants. 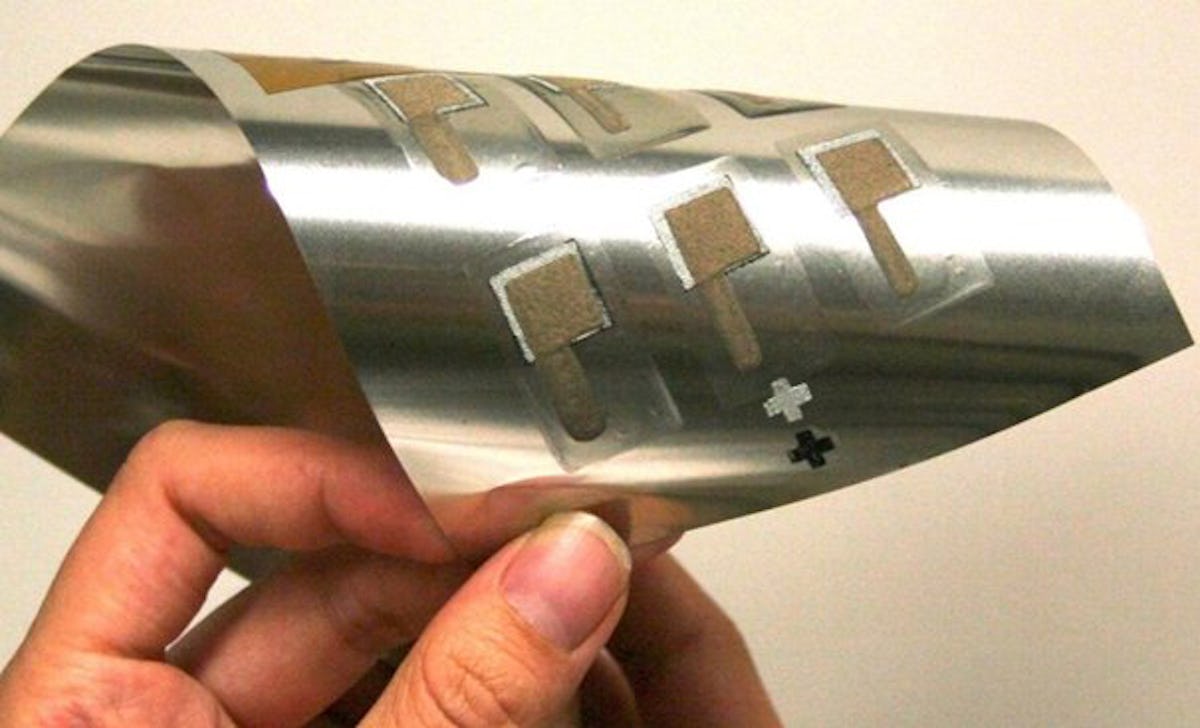 Photo: Imprint Energy
Any of these wearable health and fitness sensors and monitors—and indeed most any system that makes use of printed electronic circuits—will also ideally integrate a printable, flexible power source instead of gluing on a traditional battery. CEO Devin MacKenzie says that startup Imprint Energy has developed a flexible rechargeable battery using a solid polymer electrolyte that can be printed in open air with low-cost commercial printers and requires only minimal encapsulation.
The polymer electrolyte reportedly has ionic conductivity of ~10-3 S/cm at room temperature yet is mechanically robust, flexible and requires no additional separator in the battery cell stack. The materials set and device fabrication approach enable batteries with energy density (>5 mAhr/cm2, 300 Wh/L) that exceeds the volumetric capacity of Li polymer technology, particularly in small battery form factors, largely because these stable Zn-based batteries require much less bulky protective encapsulation. The company targets small electronics like headsets and wireless health and fitness monitors.
Key to the technology is the polymer electrolyte material developed at UC Berkeley, which suppresses the formation of the dendrites that usually bridge the electrolyte and prevent recharging with most zinc-based batteries. Each ~200µm stack of electrodes and electrolyte produces about 1.5V, and the cells can be stacked and connected in series for higher voltages.
The early stage startup thinks it might be ready to contract out scaled manufacturing in about 18 months. "These are thick film processes, so they are more forgiving and are easier to scale than thin film," says MacKenzie. "We see this Zinc PolyTM technology as a safe, low cost alternative to Li polymer in portable electronics that could change how products are designed, and allow for new portable electronics products that were not possible before," he notes.

Applied Materials aims to reduce the manufacturing cost of thin-film batteries, to enable semiconductor and systems companies to integrate micro power modules directly into their components and systems, as distributed backup power for components, and to make powered wireless sensor systems and medical implants, reports Leo Kwak, distinguished member of the technical staff, advanced technology group, office of the CTO.
Solid-state battery technology typically supplies micro power, but has very low leakage and very long cycle life, allowing such thin-film batteries to be continually trickle charged with small inputs from energy harvesters, like solar cells, and can last as long as the system without replacement. That means they have great potential as a perpetual energy component for systems. And the low temperature sputtering or evaporation processes are suitable for low-cost, flexible substrates and potentially roll-to-roll production. But costs to date have been too high for wide adoption. "The original technology itself has not been very compatible with high-volume manufacturing," says Kwak. "We're working on ways to improve yield and bring down costs, such as a production process that eliminates the shadow masks." He notes that the rest of the necessary infrastructure for ultra-low power components and practical energy harvesting technology is also now at last starting to come together as well. Most likely customers? Perhaps not the traditional battery makers, but semiconductor and system makers who will apply the familiar thin-film vacuum processes to integrate thin-film power sources directly into their systems. Kwak will discuss these issues and more at the upcoming SEMICON West.
Learn more about the progress of these technologies in markets that matter from these and other speakers at the SEMICON West 2012 program on printed/flexible/hybrid electronics, July 12, in San Francisco, Practical Plastic Electronics: Bringing Disruptive Flexible and Organic Materials into Volume Electronics Manufacturing.
For more information on attending or exhibiting at SEMICON West 2012, please visit www.semiconwest.org