A new type of paint made with carbon nanotubes at Rice University can help detect strain in buildings, bridges and airplanes.
The Rice scientists call their mixture "strain paint" and are hopeful it can help detect deformations in structures like airplane wings. Their study, published online this month by the American Chemical Society journal Nano Letters details a composite coating they invented that could be read by a handheld infrared spectrometer.
This method could tell where a material is showing signs of deformation well before the effects become visible to the naked eye, and without touching the structure. The researchers said this provides a big advantage over conventional strain gauges, which must be physically connected to their read-out devices. In addition, the nanotube-based system could measure strain at any location and along any direction.
Rice chemistry professor Bruce Weisman led the discovery and interpretation of near-infrared fluorescence from semiconducting carbon nanotubes in 2002, and he has since developed and used novel optical instrumentation to explore nanotubes' physical and chemical properties.
Satish Nagarajaiah, a Rice professor of civil and environmental engineering and of mechanical engineering and materials science, and his collaborators led the 2004 development of strain sensing for structural integrity monitoring at the macro level using the electrical properties of carbon nanofilms - dense networks/ensembles of nanotubes. Since then he has continued to investigate novel strain sensing methods using various nanomaterials.
But it was a stroke of luck that Weisman and Nagarajaiah attended the same NASA workshop in 2010. There, Weisman gave a talk on nanotube fluorescence. As a flight of fancy, he said, he included an illustration of a hypothetical system that would use lasers to reveal strains in the nano-coated wing of a space shuttle.
"I went up to him afterward and said, 'Bruce, do you know we can actually try to see if this works?'" recalled Nagarajaiah.
Nanotube fluorescence shows large, predictable wavelength shifts when the tubes are deformed by tension or compression. The paint — and therefore each nanotube, about 50,000 times thinner than a human hair — would suffer the same strain as the surface it's painted on and give a clear picture of what's happening underneath.
"For an airplane, technicians typically apply conventional strain gauges at specific locations on the wing and subject it to force vibration testing to see how it behaves," Nagarajaiah said. "They can only do this on the ground and can only measure part of a wing in specific directions and locations where the strain gauges are wired. But with our non-contact technique, they could aim the laser at any point on the wing and get a strain map along any direction."
He said strain paint could be designed with multifunctional properties for specific applications. "It can also have other benefits," Nagarajaiah said. "It can be a protective film that impedes corrosion or could enhance the strength of the underlying material."
Weisman said the project will require further development of the coating before such a product can go to market. "We'll need to optimize details of its composition and preparation, and find the best way to apply it to the surfaces that will be monitored," he said. "These fabrication/engineering issues should be addressed to ensure proper performance, even before we start working on portable read-out instruments."
"There are also subtleties about how interactions among the nanotubes, the polymeric host and the substrate affect the reproducibility and long-term stability of the spectral shifts. For real-world measurements, these are important considerations," Weisman said.
But none of those problems seem insurmountable, he said, and construction of a handheld optical strain reader should be relatively straightforward. "There are already quite compact infrared spectrometers that could be battery-operated," Weisman said. "Miniature lasers and optics are also readily available. So it wouldn't require the invention of new technologies, just combining components that already exist.
"I'm confident that if there were a market, the readout equipment could be miniaturized and packaged. It's not science fiction."
Lead author of the paper is Paul Withey, an associate professor of physics at the University of Houston-Clear Lake, who spent a sabbatical in Weisman's lab at Rice studying the fluorescence of nanotubes in polymers. Co-authors are Rice civil engineering graduate student Venkata Srivishnu Vemuru in Nagarajaiah's group and Sergei Bachilo, a research scientist in Weisman's group.
Support for the research came from the National Science Foundation, the Welch Foundation, the Air Force Research Laboratory and the Infrastructure-Center for Advanced Materials at Rice.
Watch a video demonstration of strain paint at http://www.youtube.com/watch?v=JCDA_zzevZw
Image: 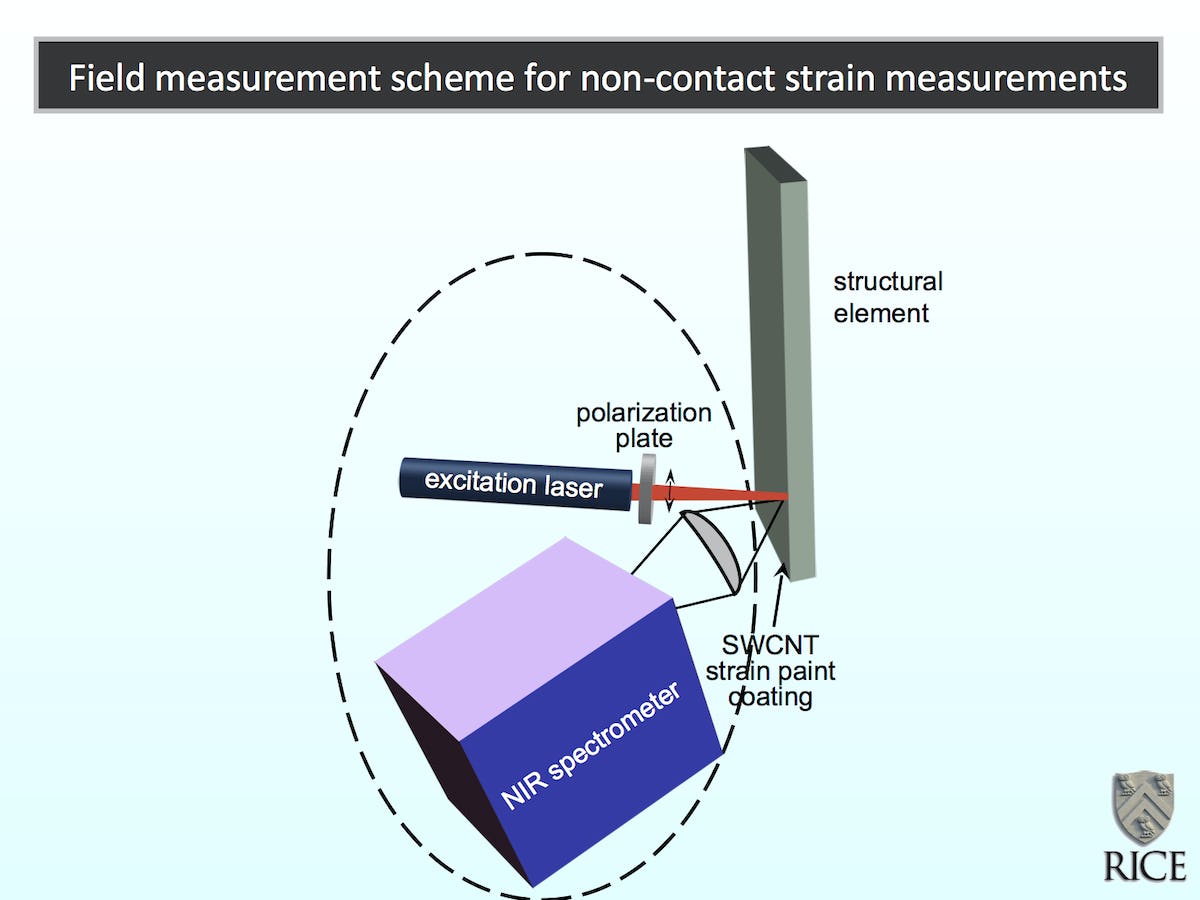