New research grants to enhance the use of wonder material

Research projects that will focus on how to enhance the 'manufacturability' of graphene, one of the thinnest, strongest and most conductive materials known to man, are to receive £21.5 million in funding. Chancellor of the Exchequer, George Osborne announced the backing during an interview with Sir Paul Nurse who was guest editor of the BBC's Today programme on 27 December 2012.
Teams at Imperial College London, the universities of Cambridge, Durham, Exeter, Manchester and Royal Holloway University of London will use the funding for both research and equipment.
Welcoming the news, Minister for Universities and Science, David Willetts said: "Scientists at the University of Manchester won the Nobel Prize for the discovery of graphene. It's now vital we harness the excellent research taking place in our world class institutions to exploit the commercial potential of this astonishing material. This significant investment will support cutting edge research projects to find everyday uses for graphene. They will foster innovation, drive growth and help the UK get ahead in the global race."
The universities will be working with industrial partners including Nokia, BAE Systems, Procter & Gamble, Qinetiq, Rolls-Royce, Dyson, Sharp and Philips Research.
Professor David Delpy, EPSRC's Chief Executive said: "The discovery of graphene was the first step towards a revolution in materials. This funding will advance research into the uses of this incredible material and support the next steps towards applications that will benefit individuals, industry and the UK economy."
The University of Cambridge has been awarded over £12 million for research into graphene flexible electronics and optoelectronics, which could include things like touch screens. Professor Andrea Ferrari is working with a large consortium of electronics, technology, materials and product companies, to explore how these technologies might be developed and commercialised.
Imperial College London has been awarded over £4.5 million for equipment and research into engineering with graphene for multi-functional coatings and fibre composites and graphene three-dimensional networks. Professor Tony Kinloch at Imperial is working with a number of aerospace companies, including Airbus, to investigate the use of graphene in advanced structural composites as an alternative material to dissipate energy after lightning strikes.
Professor Clare Gray at Cambridge University and Professor Robert Dryfe at Manchester University are exploring potential use of graphene as super-capacitors and batteries for energy storage applications. These may be useful in addressing the limiting factors of storage for personal devices and the uncertainty and intermittency of renewable supplies in parts of the world that are off-grid.
Meanwhile, Proctor and Gamble and Dyson will be collaborating with Professor Karl Coleman, a chemist at Durham University, to explore the potential applications of graphene composite - particularly for thinner, stronger material applications. Karl was the Royal Society of Chemistry Innovator of the Year 2011.
Details of funding 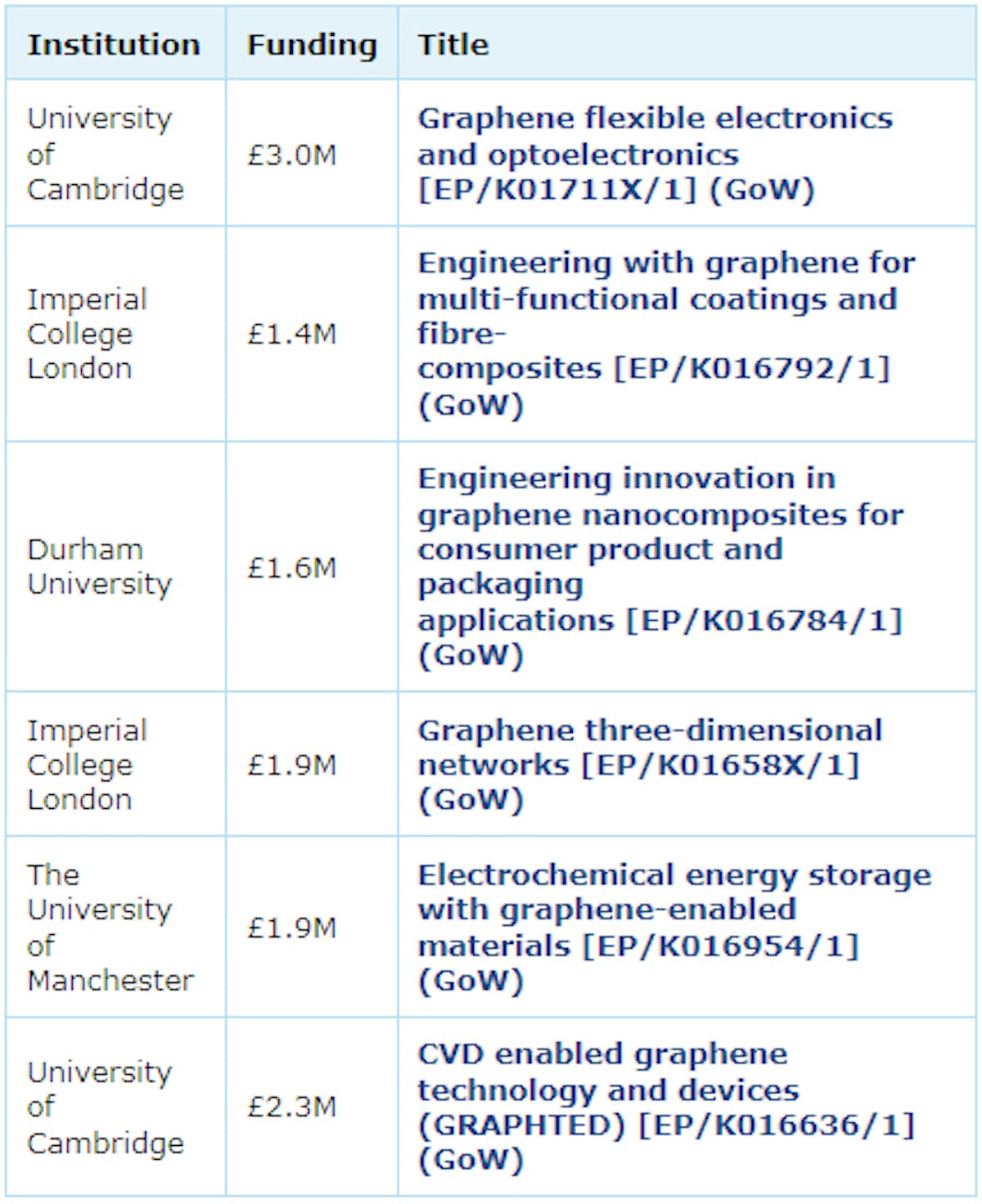 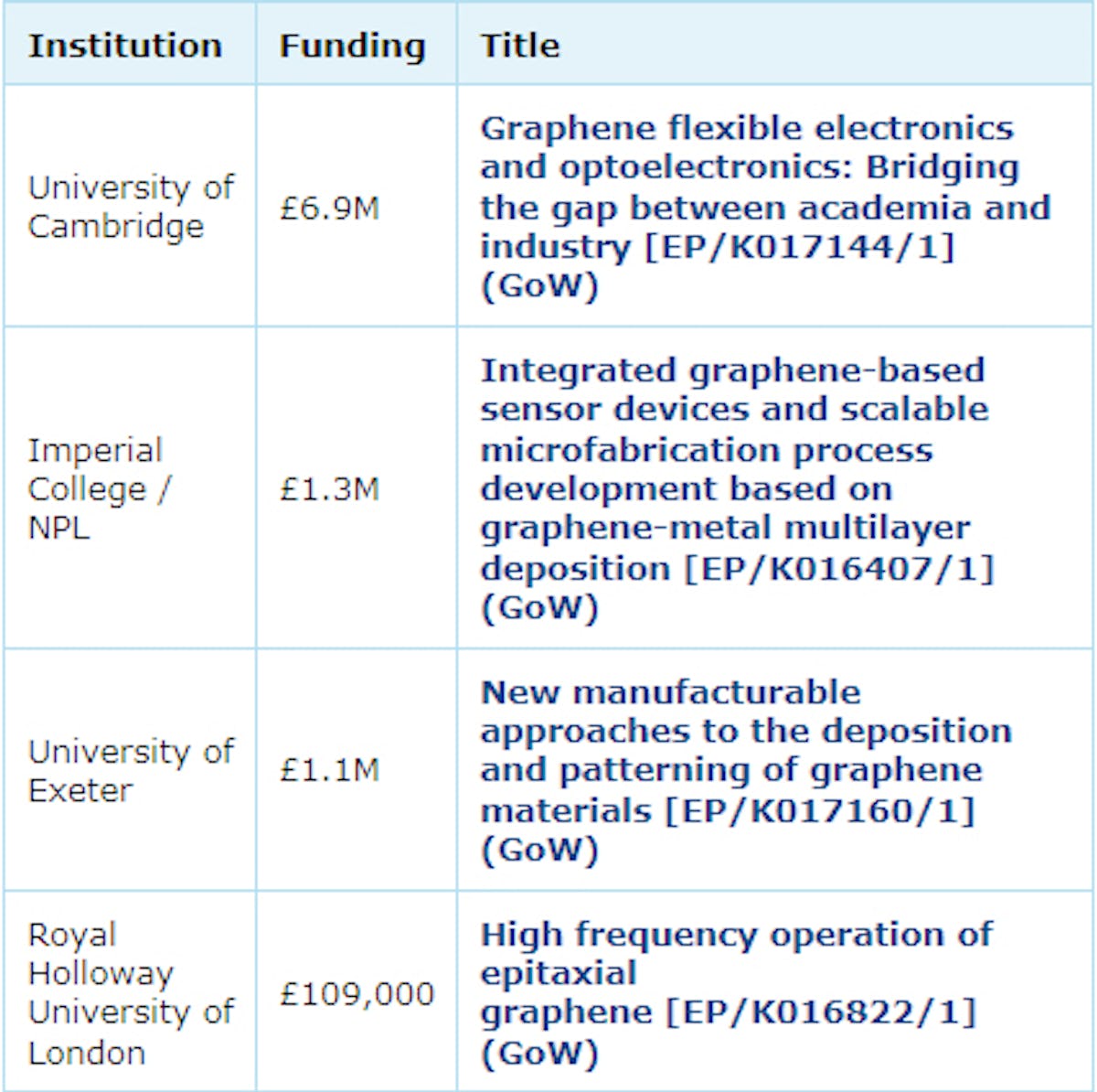