Nanotechnology has long offered the promise of wonderful new materials and vast improvements in the essentials of modern life. To date, however, this technology has been accused of falling short of such potential. In spite of billions invested in nanomaterials research, no life-changing nano products have made their way to market. Possibly even more telling is the fact that few everyday products contain nanomaterials — these potential wonder materials are still struggling to find their way into common applications.
The fundamental technical reason for this shortfall is due primarily to a single problem: Nano particles exhibit extraordinary characteristics when measured in isolation due to, among other attributes, their exceptional surface area. Yet in practical applications these potentially incredible properties are not being realized because these materials have proven to be insoluble, they aggregate in clumps and bundles, compromising their surface area. This tendency to aggregate dramatically compromises the super performance potential that was expected to make these materials candidates for myriad industrial applications.
In addition to the historical underperformance of nanomaterials, they have also been expensive to produce and, most importantly, to apply. It is this combination of less than optimum performance with high price that has limited applications of these materials.
Xolve, a Middleton, Wisconsin based materials company is out to change this. While Xolve is only one of a host of new technology companies working in nanomaterials and, especially, in graphene, according to Miguel Mireles, Xolve's head of Business Development, Xolve feels it can address both of these fundamental problems: performance and price.
Find out more at Graphene Live! where Xolve will be speaking.

The company's basic discovery, according to Mireles, overcomes the historic inability to achieve nanomaterial solubility. This foundation discovery emanated from the University of Wisconsin and enabled the placing of a broad range of nanoparticles in true solutions. Creating true solutions of nanoparticles resolves the surface area dilemma by breaking up the aggregation and returning surface through dispersing the particles in solvent. This base technology is also capable of selecting an optimized solvent that when applied, in certain instances, to common materials (such as graphite) will inexpensively exfoliate that material into nano material form (such as graphene).
It is rare that the technology and discoveries that form the basis of a modern early-stage company are such that they permit the achievement of something fundamental in the physical sciences - especially something previously considered impossible. Prior to Xolve's discovery, creating true solutions of graphene, carbon nanotubes and other nanoparticles was generally viewed as one of the 'holy grails' of nanomaterials and considered an impossibility by chemists as well as physical and material scientists.
This inability to easily disturb the aggregation tendencies of nanomaterials is important because it is at the heart of the general failure to achieve the high performance potential of nanoparticles that has long been expected of them.
A testament to the depth of belief in the insolubility of these materials is the number of technical papers, processes and even companies devoted to the development of dispersion and functionalization methods that attempt to trick macromolecules into doing useful work-only to achieve suboptimal results.
In attempts to make forms of nanocarbon useful, for example, previous methods relied on adding materials to the nanocarbon by either covalent functionalization or through the use of surfactants and/or dispersants. Functionalization is the attachment of molecules to the nanoparticle to make it capable of being used with other materials. This process is expensive and limits the potentially superior properties of, and can, in some cases, partially destroy the nanoparticle to which the process is applied. Alternatively, the use of surfactants and/or dispersants to prevent aggregation of nanoparticles results in contamination of the nanoparticle surface and of the host material. Contamination of the host material by surfactants is especially problematic in polymers. Nanomaterials treated in either of these fashions aren't able to provide performance equal to their full potential and are very expensive to place into applications.
Stated differently: In every case, methods developed in response to the failure to be able to place a nanomaterial into a true solution have resulted in compromises to the very characteristics that triggered the selection of the nanomaterial for the target application in the first place. Furthermore, the complexities of many of the processes add significant cost. It is not unusual for these processes to require semiconductor-type tools, high temperatures, volatile chemicals and/or other process steps that are extremely complex and expensive.
Xolve has added to its initial discovery and built a suite of technologies that will fundamentally change the price/performance ratio of nanomaterials in the applications areas of polymer composites and energy storage materials.
Xolve uses its ability to inexpensively exfoliate materials through the mating of specific nanoparticles with solvents optimized to them, to produce very inexpensive, yet pristine, graphene. Once Xolve has a nanoparticle, like graphene, in a true solution of optimized solvents, other aspects of its technology can maximize the ability of that nanomaterial to achieve increases in specific target attributes like modulus, conductivity and barrier properties. This optimization technology achieves, for instance, improvements in levels of electrical conductivity in target polymers by co-exfoliating graphene and carbon nanotubes into the polymer matrix and producing an interactive system of nanomaterials that is more conductive than either the nanotubes or graphene on their own and a material that is much cheaper than one based on nanotubes alone. Once the nanomaterial is exfoliated and optimized it must be placed into a target material while maintaining that level of exfoliation and optimization. Xolve has developed a chemical toolset that allows it to achieve that across the world's most used and important industrial polymers.
Mireles claims that Xolve can significantly modify strength, electrical and thermal conductivity and barrier properties in a broad selection of polymer composites at costs similar to those of standard materials. Further, he says that Xolve can modify multiple attributes simultaneously. It has been common, for instance, for increases in a target polymer's conductivity to come at the expense of strength. "We can maintain or increase base attributes while dramatically increasing a target attribute—and at a cost structure similar to standard materials", Mireles said. "It is through our expanding range of technical capabilities that we hope to fundamentally shift the price performance of graphene and other nanomaterials in common applications" 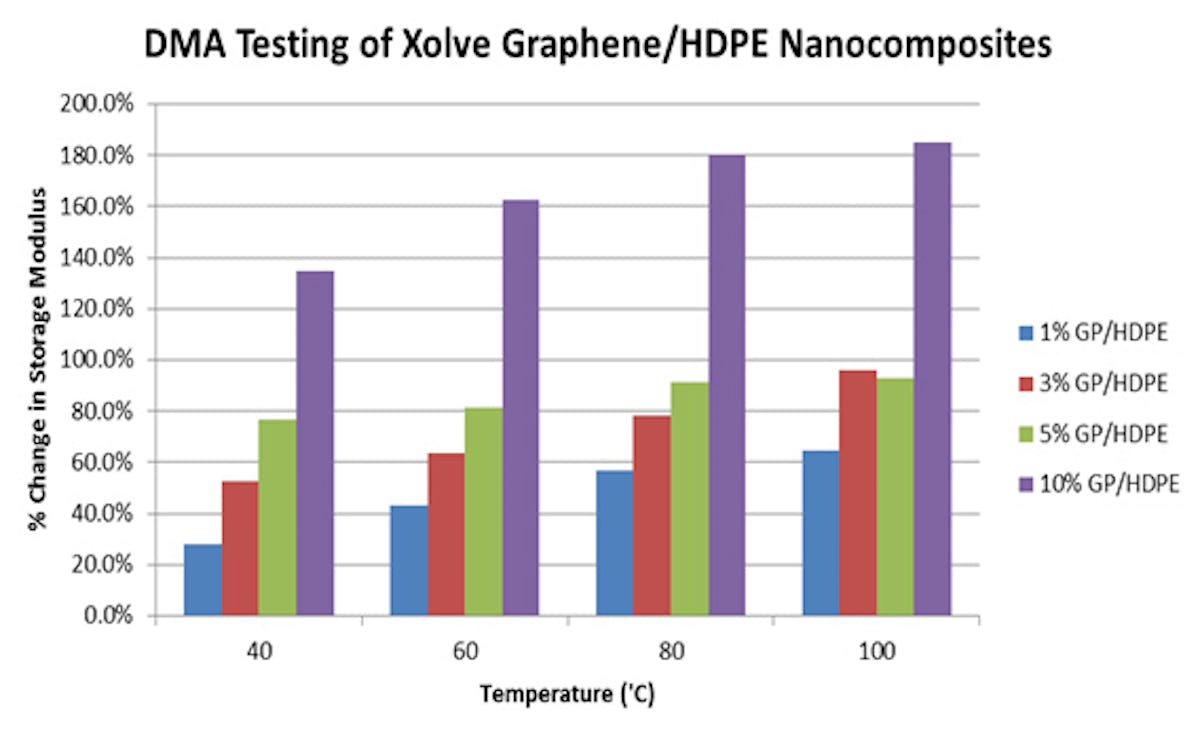 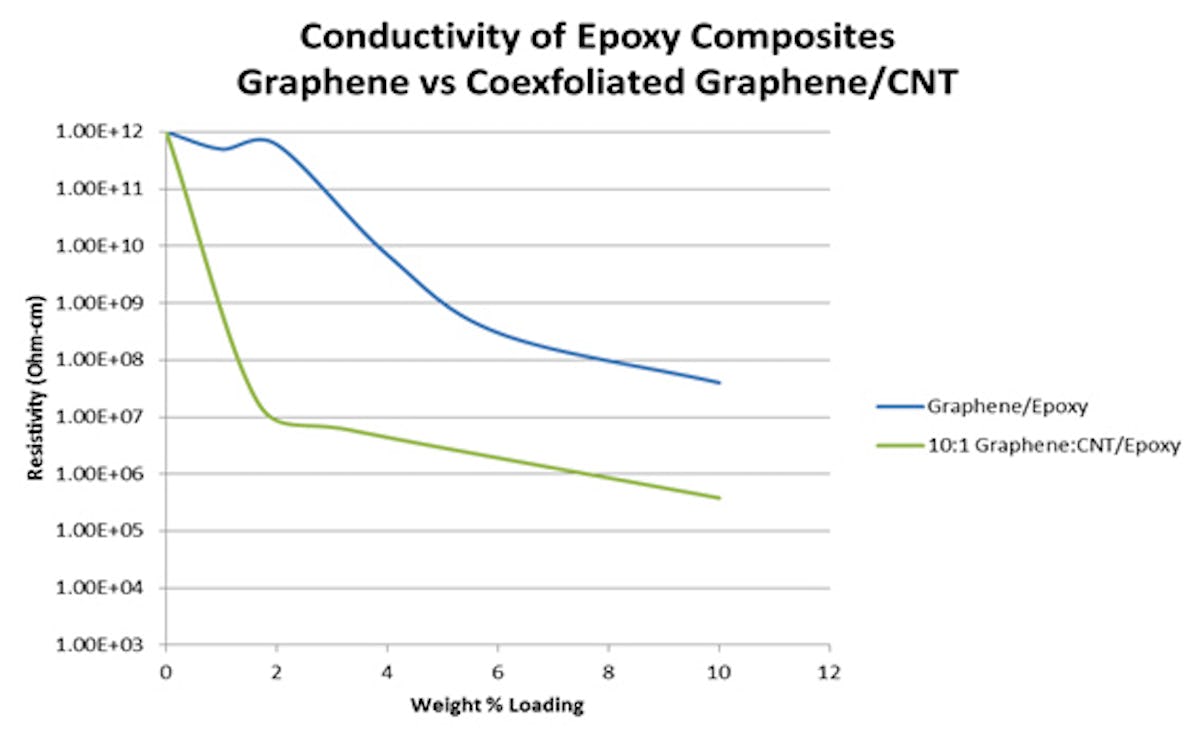