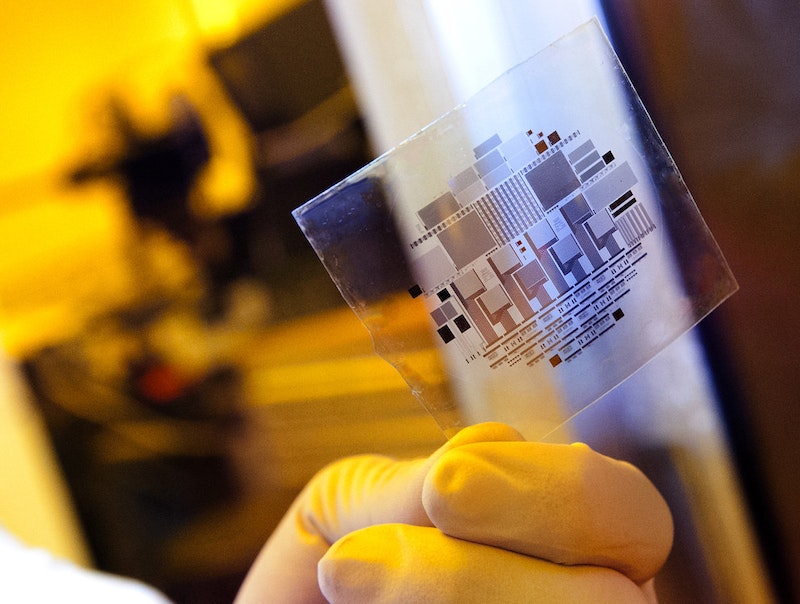 Nearly everyone knows what the inside of a computer or a mobile phone looks like: A stiff circuit board, usually green, crammed with chips, resistors, capacitors and sockets, interconnected by a suburban sprawl of printed wiring. But what if our printed circuit board was not stiff, but flexible enough to bend or even fold?
It may sound like an interesting laboratory curiosity, but not to Enrique Gomez, an assistant professor of chemical engineering at Penn State. "It could transform the way we make and use electronic devices," he says. Gomez is one of many scientists investigating flexible electronics at the University's Materials Research Institute. Others are doing the same at universities and corporations around the world.
Flexible electronics are in vogue for two reasons.
First, they promise an entirely new design tool. Imagine, for example, tiny smartphones that wrap around our wrists, and flexible displays that fold out as large as a television. Or photovoltaic cells and reconfigurable antennas that conform to the roofs and trunks of our cars. Or flexible implants that can monitor and treat cancer or help paraplegics walk again.
Penn State's interest in flexible and printed electronics is not just theoretical. In October 2011, the University began a multi-year research project with Dow Chemical Corporation. Learn more about the partnership.
Second, flexible electronics might cost less to make. Conventional semiconductors require complex processes and multi-billion dollar foundries. Researchers hope to print flexible electronics on plastic film the same way we print ink on newspapers.
"If we could make flexible electronics cheap enough, you could have throwaway electronics. You could wear your phone on your clothing, or run a bioassay to assess your health simply by wiping your nose with a tissue," Gomez says. Before any of this happens, though, researchers have to rethink what they know about electronics.
That means understanding why conventional electronics are victims of their own success, says Tom Jackson, Kirby Chair Professor of Electrical Engineering. Jackson should know, because he helped make them successful. Before joining Penn State in 1992, he worked on IBM's industry-leading laptop displays. At Penn State, he pioneered the use of organic molecules to make transistors and electronic devices.
Modern silicon processors integrate billions of transistors, the semiconductor version of an electrical switch on tiny slivers of crystalline silicon. Squeezing so many transistors in a common location enables them to handle complex problems. As they shrink in size, not only can we fit more transistors on a chip, but the chip gets less expensive to manufacture. "It is hard to overstate how important this has been," Jackson explains. "Remember when we paid for long-distance phone calls by the minute? High-speed switching drove those costs way down. In some cases, we can think of computation as free. You can buy an inexpensive calculator at a store for $1, and the chip doesn't even dominate the cost. The power you get is amazing."
That, says Jackson, is the problem. Semiconductor processors are so good and so cheap, we fall into the trap of thinking they can solve every problem. Sometimes, it takes more flexibility to succeed.
Source and top image: Penn State University
For more attend the forthcoming events:
Printed Electronics Asia, Tokyo, Japan, 9-10 July 2013.
Printed Electronics USA, Santa Clara, California 20-21 November 2013
Learn more at the next leading event on the topic: Printed Electronics Europe 2020