Printing microbatteries the size of a grain of sand 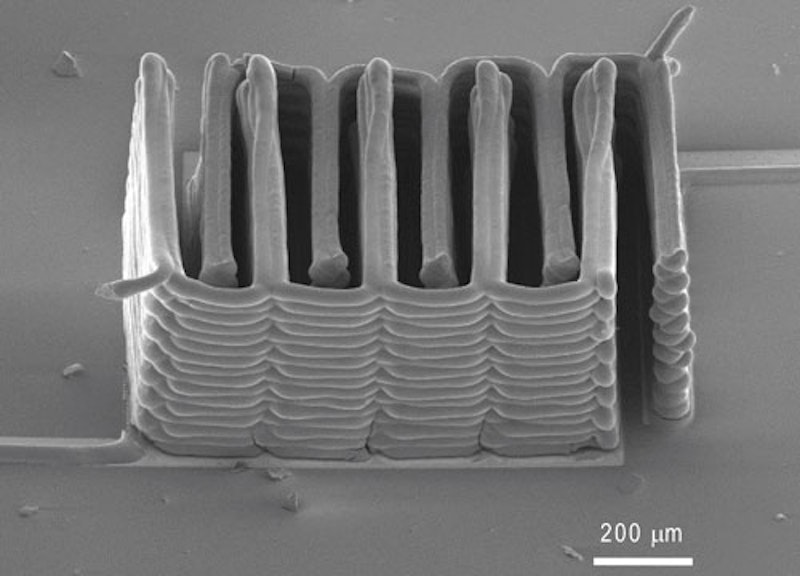 3D printing can now be used to print lithium-ion microbatteries the size of a grain of sand. The printed microbatteries could supply electricity to tiny devices in fields from medicine to communications, including many that have lingered on lab benches for lack of a battery small enough to fit the device, yet provide enough stored energy to power them.
To make the microbatteries, a team based at Harvard University and the University of Illinois at Urbana-Champaign printed precisely interlaced stacks of tiny battery electrodes, each less than the width of a human hair.
"Not only did we demonstrate for the first time that we can 3D-print a battery; we demonstrated it in the most rigorous way," said Jennifer A. Lewis, senior author of the study, who is also the Hansjörg Wyss Professor of Biologically Inspired Engineering at the Harvard School of Engineering and Applied Sciences (SEAS), and a Core Faculty Member of the Wyss Institute for Biologically Inspired Engineering at Harvard University. Lewis led the project in her prior position at the University of Illinois at Urbana-Champaign, in collaboration with co-author Shen Dillon, an Assistant Professor of Materials Science and Engineering there.
In recent years engineers have invented many miniaturized devices, including medical implants, flying insect-like robots, and tiny cameras and microphones that fit on a pair of glasses. But often the batteries that power them are as large or larger than the devices themselves, which defeats the purpose of building small. To get around this problem, manufacturers have traditionally deposited thin films of solid materials to build the electrodes. However, due to their ultra-thin design, these solid-state micro-batteries do not pack sufficient energy to power tomorrow's miniaturized devices.
The scientists realized they could pack more energy if they could create stacks of tightly interlaced, ultrathin electrodes that were built out of plane. For this they turned to 3D printing. 3D printers follow instructions from three-dimensional computer drawings, depositing successive layers of material—inks—to build a physical object from the ground up, much like stacking a deck of cards one at a time. The technique is used in a range of fields, from producing crowns in dental labs to rapid prototyping of aerospace, automotive, and consumer goods. Lewis' group has greatly expanded the capabilities of 3D printing. They have designed a broad range of functional inks—inks with useful chemical and electrical properties. And they have used those inks with their custom-built 3D printers to create precise structures with the electronic, optical, mechanical, or biologically relevant properties they want.
To print 3D electrodes, Lewis' group first created and tested several specialized inks. Unlike the ink in an office inkjet printer, which comes out as droplets of liquid that wet the page, the inks developed for extrusion-based 3D printing must fulfill two difficult requirements. They must exit fine nozzles like toothpaste from a tube, and they must immediately harden into their final form.
In this case, the inks also had to function as electrochemically active materials to create working anodes and cathodes, and they had to harden into layers that are as narrow as those produced by thin-film manufacturing methods. To accomplish these goals, the researchers created an ink for the anode with nanoparticles of one lithium metal oxide compound, and an ink for the cathode from nanoparticles of another. The printer deposited the inks onto the teeth of two gold combs, creating a tightly interlaced stack of anodes and cathodes. Then the researchers packaged the electrodes into a tiny container and filled it with an electrolyte solution to complete the battery.
Next, they measured how much energy could be packed into the tiny batteries, how much power they could deliver, and how long they held a charge. "The electrochemical performance is comparable to commercial batteries in terms of charge and discharge rate, cycle life and energy densities. We're just able to achieve this on a much smaller scale," Dillon said.
"Jennifer's innovative microbattery ink designs dramatically expand the practical uses of 3D printing, and simultaneously open up entirely new possibilities for miniaturization of all types of devices, both medical and non-medical. It's tremendously exciting," said Wyss Founding Director Donald Ingber, who is also a Professor of Bioengineering at Harvard SEAS.
Source and top image showing the interlaced stack of electrodes that were printed layer by layer to create the working anode and cathode of a microbattery: Harvard
For more, read:
3D Printing 2013-2025: Technologies, Markets, Players
Printed, Organic & Flexible Electronics: Forecasts, Players & Opportunities 2013-2023
Energy Harvesting and Storage for Electronic Devices 2012-2022
Also, attend:
Printed Electronics Asia, 9-10 July 2013, Tokyo, Japan
Printed Electronics USA, 20-21 Nov 2013, Santa Clara, USA
Energy Harvesting & Storage USA, 20-21 Nov 2013, Santa Clara, USA
Learn more at the next leading event on the topic: Printed Electronics Europe 2020