Lab-on-a-chip technology gets a flexible upgrade

Microfluidic devices move liquids through tiny, hair-sized pathways carved into glass slides and have distinct advantages over traditional laboratories when it comes to medical diagnostics. At these reduced scales, fluid transport is enhanced by factors such as diffusion and high surface-to-volume ratios, making testing procedures much faster. By constructing parallel arrays of microfluidic pathways, researchers are working to produce 'lab-on-a-chip' technologies that allow multiple biological tests to be performed using just a drop of blood or urine. In a development that promises to make lab-on-a-chip devices more portable and economic to construct, Yo Tanaka from the RIKEN Quantitative Biology Center and colleagues have now produced a new type of microfluidic control valve that takes up significantly less space on a microchip than existing approaches.
In the majority of today's microfluidic devices, silicone pneumatic valves are used to manipulate liquid samples. Pneumatic valves, however, require noisy compressors and complicated air channel systems, which are often too bulky for practical lab-on-a-chip applications. Piezoelectric actuators—inorganic crystals that change shape when electrically stimulated—are feasible alternatives, but while piezoelectric materials are less obtrusive than pressurized air technology, they are excessively large when compared to the size of the microchip itself.
Tanaka and his colleagues instead investigated the remarkable properties of electroactive polymers. These materials are rubber-like organic compounds that expand and contract when exposed to an electric current. As electroactive polymers can exhibit large mechanical strain force at small scales, the team deduced that creating membranes incorporating these materials could be a promising way to miniaturize microfluidic control valves.
After experimenting with many valve shapes, the researchers settled on a micrometer-sized, dome-shaped polymer diaphragm sandwiched between soft electrode sheets (Fig. 1). 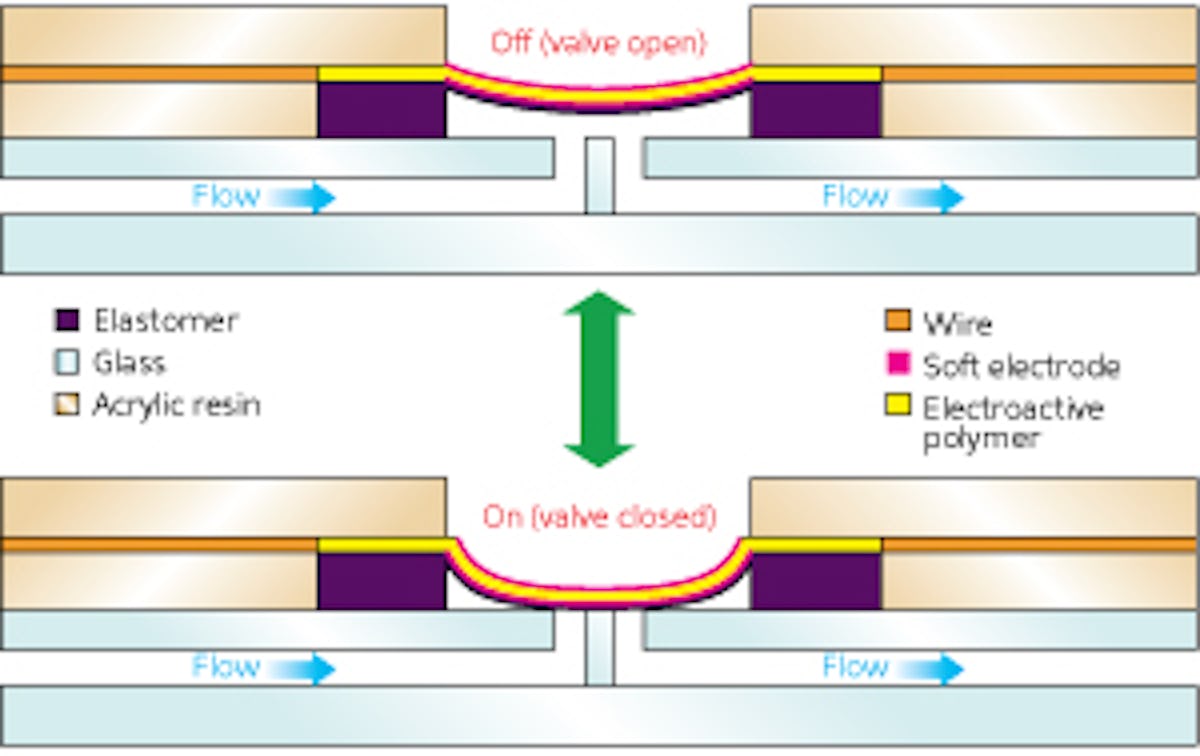