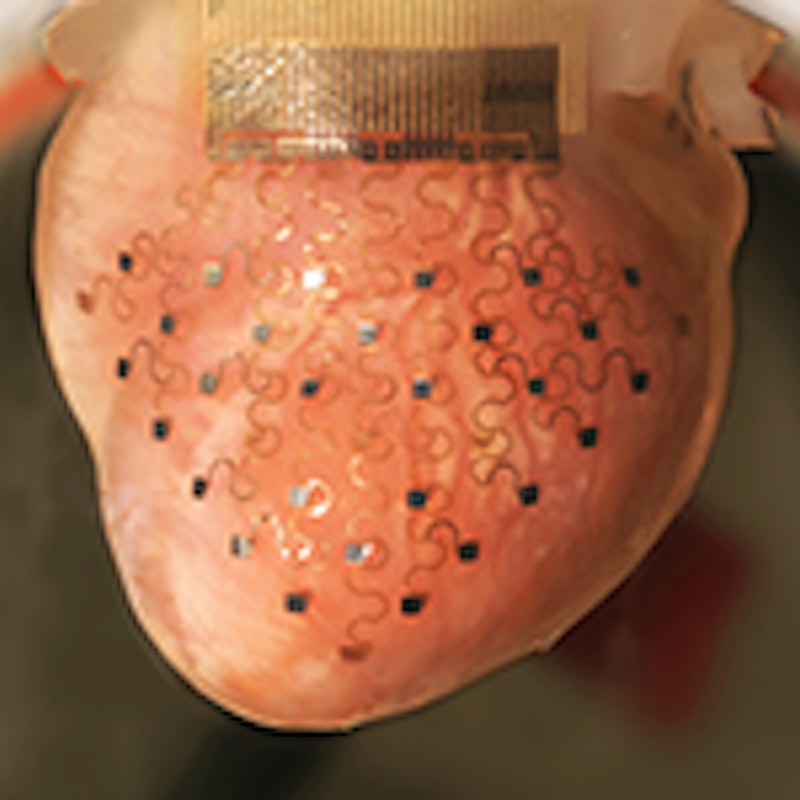 Using an inexpensive 3-D printer, biomedical engineers have developed a custom-fitted, implantable device with embedded sensors that could transform treatment and prediction of cardiac disorders.
Igor Efimov, PhD, at the School of Engineering & Applied Science at Washington University in St. Louis and an international team of biomedical engineers and materials scientists have created a 3-D elastic membrane made of a soft, flexible, silicon material that is precisely shaped to match the heart's epicardium, or the outer layer of the wall of the heart. Current technology is two-dimensional and cannot cover the full surface of the epicardium or maintain reliable contact for continual use without sutures or adhesives.
The team can then print tiny sensors onto the membrane that can precisely measure temperature, mechanical strain and pH, among other markers, or deliver a pulse of electricity in cases of arrhythmia. Those sensors could assist physicians with determining the health of the heart, deliver treatment or predict an impending heart attack before a patient exhibits any physical signs.
"Each heart is a different shape, and current devices are one-size-fits-all and don't at all conform to the geometry of a patient's heart," says Efimov, the Lucy & Stanley Lopata Distinguished Professor of Biomedical Engineering. "With this application, we image the patient's heart through MRI or CT scan, then computationally extract the image to build a 3-D model that we can print on a 3-D printer. We then mold the shape of the membrane that will constitute the base of the device deployed on the surface of the heart."
Ultimately, the membrane could be used to treat diseases of the ventricles in the lower chambers of the heart or could be inserted inside the heart to treat a variety of disorders, including atrial fibrillation, which affects 3 million to 5 million patients in the United States.
"Currently, medical devices to treat heart rhythm diseases are essentially based on two electrodes inserted through the veins and deployed inside the chambers," says Efimov, also a professor of radiology and of cell biology and physiology at the School of Medicine. "Contact with the tissue is only at one or two points, and it is at a very low resolution. What we want to create is an approach that will allow you to have numerous points of contact and to correct the problem with high-definition diagnostics and high-definition therapy."
Co-leading the team with Efimov is John Rogers, PhD, the Swanlund Chair and professor of materials science and engineering and director of the F. Seitz Materials Research Laboratory at the University of Illinois at Urbana-Champaign. Rogers, who developed the transfer printing technique, developed the sensors using semiconductor materials including silicon, gallium arsenide and gallium nitride, along with metals, metal oxides and polymers.
Recently, Google announced its scientists had developed a type of contact lens embedded with sensors that could monitor glucose levels in patients with diabetes. Efimov says the membrane his team has developed is a similar idea, though much more sophisticated.
"Because this is implantable, it will allow physicians to monitor vital functions in different organs and intervene when necessary to provide therapy," he says. "In the case of heart rhythm disorders, it could be used to stimulate cardiac muscle or the brain, or in renal disorders, it would monitor ionic concentrations of calcium, potassium and sodium."
Efimov says the membrane could even hold a sensor to measure troponin, a protein expressed in heart cells and a hallmark of a heart attack. Analysis for troponin is standard of care for patients with suspected heart attacks due to a test developed by Jack Ladenson, PhD, the Oree M. Carroll and Lillian B. Ladenson Professor of Clinical Chemistry in Pathology and Immunology and professor of clinical chemistry in medicine at the School of Medicine.
Ultimately, such devices will be combined with ventricular assist devices, Efimov says.
"This is just the beginning," he says. "Previous devices have shown huge promise and have saved millions of lives. Now we can take the next step and tackle some arrhythmia issues that we don't know how to treat."
Source and top image: Washington University in St Louis
For more attend the forthcoming event:
Printed Electronics Europe, Berlin, Germany 1-2 April 2014
Learn more at the next leading event on the topic: Healthcare Sensor Innovations USA 2020