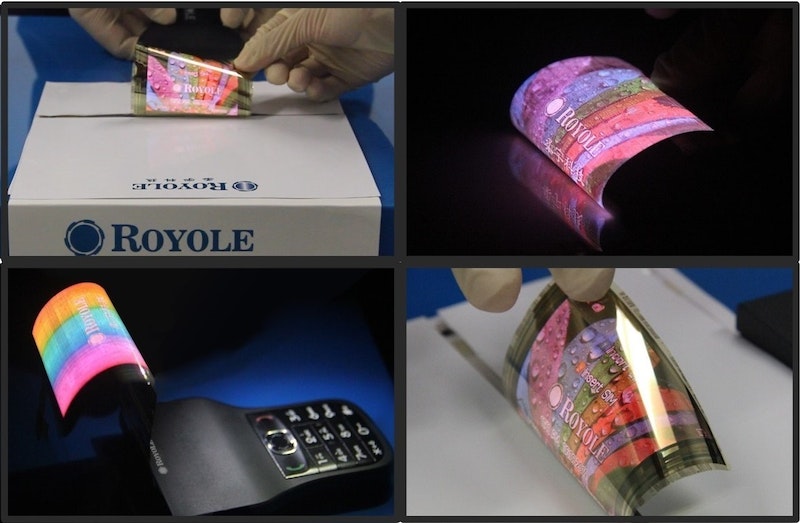 Royole Corporation has successfully demonstrated the world's thinnest full-color flexible display that has been integrated with a smartphone in July 2014. This flexible display can be easily bendable as well as rollable. The thickness of the whole display is only about 0.01 mm (10 μm), which is less than one fifth the diameter of the human hair. The bending radius of this flexible display can be less than 1 mm, which is even thinner than a pen refill.
Dr. Bill Liu, a Stanford graduate and the founder of Royole Corporation, has stated that the newly developed full-color AMOLED flexible display is a significant improvement when compared with the thin flexible display backplane released one year ago by Royole, as it not only uses AMOLED as the front panel, but has also been successfully integrated with a fully-functional mobile platform. Royole has also reduced the overall display thickness by an order of magnitude, with the display thickness being as thin as an onion skin.
According to a published report from the company, this new display is ultra-flexible with demonstrated reliability. For example, while the bending radius of the display is smaller than the radius of a typical pen refill, it still has the capability to display high quality videos with brilliant and vivid colors.
Flexible displays have many advantages, such as being ultra-thin, light weight, bendable, portable, shatter-proof, unbreakable, low energy, sleek design capability, etc. Compared with the traditional flat panel displays, flexible displays provide greater freedom for product design, as well as greatly improving the user's experience. Additionally, the application of novel processing technologies (printing or roll-to-roll) to fabricate the flexible display can largely reduce the cost of production.
It follows then that flexible AMOLED display has been widely considered by the display industry as the next generation of information display technology, replacing CRT and LCD, and which has the potential to be applied in numerous areas such as novel smart phones, intelligent home systems, wearable electronic devices, etc. This will have an unprecedented impact in diverse visual experiences in our daily lives.
The market research company, IDTechEx, has predicted that the global printed and flexible electronics market will reach $330 billion by the year 2027, in which flexible display will be the major market segment. In the recently released IDTechEx report, the flexible display market was predicted to show an explosive growth within the next decade.
The design and fabrication of flexible displays are very challenging, and many aspects of manufacturing issues and problems need to be addressed, including materials, processing, semiconductor device structures, integrated circuits and system design, etc. Therefore, the design and manufacturing of flexible displays are far beyond simply changing the substrate type or only replacing the functional material in the traditional display. Over the past two years, Royole Corporation has already accumulated hundreds of intellectual property rights including know-hows in technologies covering virtually all the aspects of display manufacturing such as materials, processing, devices, circuits, electronic system design, etc., which they have utilized in their recent breakthrough. With the world's thinnest bendable and rollable full-color AMOLED flexible display for smartphones as pioneered by Royole Corporation, the display industry revolution may be soon accelerated.
Royole is a global start-up company focusing on R&D of novel information display technologies, especially the research, design, development and manufacturing of the flexible displays and related electronic devices. Royole Corporation operates in three major high-tech regions globally: Silicon Valley in the U.S., Hong Kong, and Shenzhen, China, since starting in the middle of 2012. The company is backed by several of the world's premier VC firms and angel investors since its inception.
Royole Corporation is led by a team of experienced technology experts and professionals from Stanford, Tsinghua, several other top research institutes and Fortune Global 500 high-tech companies.
Source: Royole Corporation
Learn more at the next leading event on the topic: Printed Electronics Europe 2020