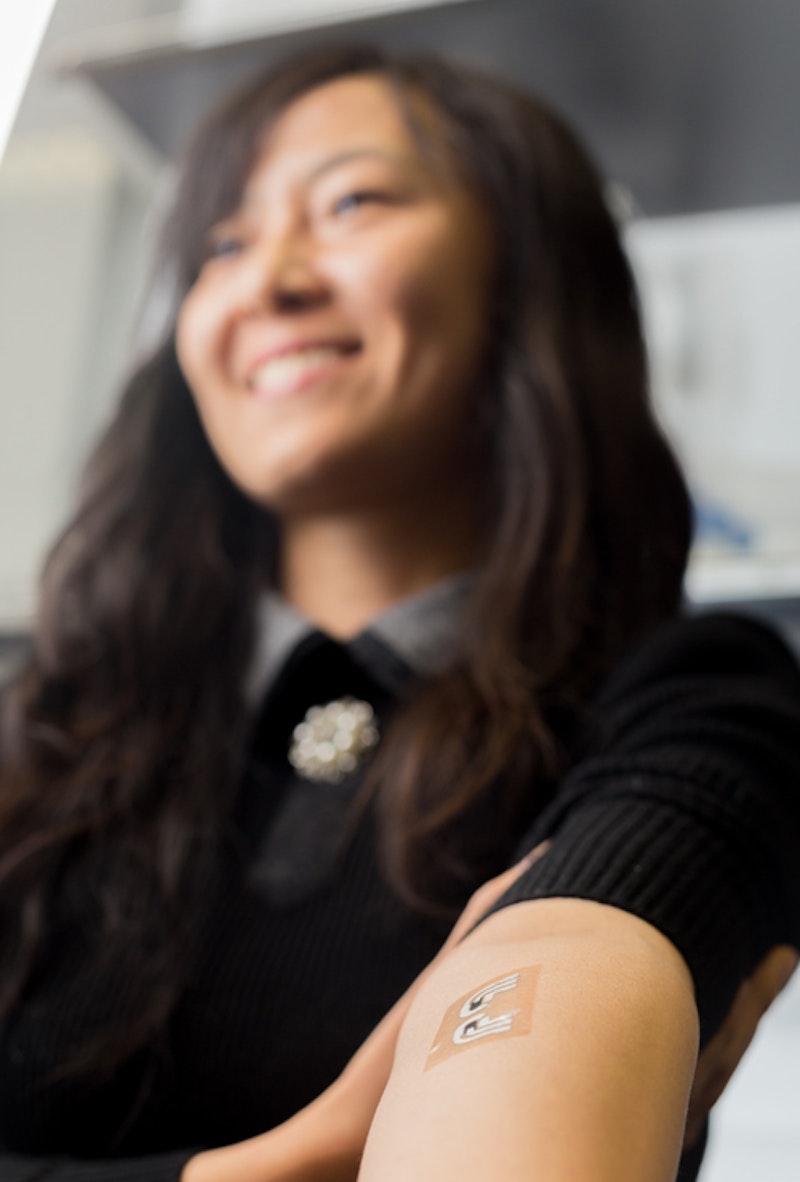 Nanoengineers at the University of California, San Diego have tested a temporary tattoo that both extracts and measures the level of glucose in the fluid in between skin cells. This first-ever example of the flexible, easy-to-wear device could be a promising step forward in noninvasive glucose testing for patients with diabetes.
The sensor was developed and tested by graduate student Amay Bandodkar and colleagues in Professor Joseph Wang's laboratory at the NanoEngineering Department and the Center for Wearable Sensors at the Jacobs School of Engineering at UC San Diego. Bandodkar said this "proof-of-concept" tattoo could pave the way for the Center to explore other uses of the device, such as detecting other important metabolites in the body or delivering medicines through the skin.
At the moment, the tattoo doesn't provide the kind of numerical readout that a patient would need to monitor his or her own glucose. But this type of readout is being developed by electrical and computer engineering researchers in the Center for Wearable Sensors. "The readout instrument will also eventually have Bluetooth capabilities to send this information directly to the patient's doctor in real-time or store data in the cloud," said Bandodkar.
The research team is also working on ways to make the tattoo last longer while keeping its overall cost down, he noted. "Presently the tattoo sensor can easily survive for a day. These are extremely inexpensive—a few cents—and hence can be replaced without much financial burden on the patient."
The Center "envisions using these glucose tattoo sensors to continuously monitor glucose levels of large populations as a function of their dietary habits," Bandodkar said. Data from this wider population could help researchers learn more about the causes and potential prevention of diabetes, which affects hundreds of millions of people and is one of the leading causes of death and disability worldwide.
People with diabetes often must test their glucose levels multiple times per day, using devices that use a tiny needle to extract a small blood sample from a fingertip. Patients who avoid this testing because they find it unpleasant or difficult to perform are at a higher risk for poor health, so researchers have been searching for less invasive ways to monitor glucose.
In their report in the journal Analytical Chemistry, Wang and his co-workers describe their flexible device, which consists of carefully patterned electrodes printed on temporary tattoo paper. A very mild electrical current applied to the skin for 10 minutes forces sodium ions in the fluid between skin cells to migrate toward the tattoo's electrodes. These ions carry glucose molecules that are also found in the fluid. A sensor built into the tattoo then measures the strength of the electrical charge produced by the glucose to determine a person's overall glucose levels.
"The concentration of glucose extracted by the non-invasive tattoo device is almost hundred times lower than the corresponding level in the human blood," Bandodkar explained. "Thus we had to develop a highly sensitive glucose sensor that could detect such low levels of glucose with high selectivity."
A similar device called GlucoWatch from Cygnus Inc. was marketed in 2002, but the device was discontinued because it caused skin irritation, the UC San Diego researchers note. Their proof-of-concept tattoo sensor avoids this irritation by using a lower electrical current to extract the glucose.
Wang and colleagues applied the tattoo to seven men and women between the ages of 20 and 40 with no history of diabetes. None of the volunteers reported feeling discomfort during the tattoo test, and only a few people reported feeling a mild tingling in the first 10 seconds of the test.
To test how well the tattoo picked up the spike in glucose levels after a meal, the volunteers ate a carb-rich meal of a sandwich and soda in the lab. The device performed just as well at detecting this glucose spike as a traditional finger-stick monitor.
The researchers say the device could be used to measure other important chemicals such as lactate, a metabolite analyzed in athletes to monitor their fitness. The tattoo might also someday be used to test how well a medication is working by monitoring certain protein products in the intercellular fluid, or to detect alcohol or illegal drug consumption.
Bandodkar was joined on the study by UC San Diego nanoengineers Wenzhao Jia, Ceren Yardımcı, Xuan Wang, Julian Ramirez and Wang, Director of the Center for Wearable Sensors and SAIC Endowed Chair and Distinguished Professor in the NanoEngineering Department.
Source and top image: University of California, San Diego
Learn more at the next leading event on the topic: Printed Electronics Europe 2020