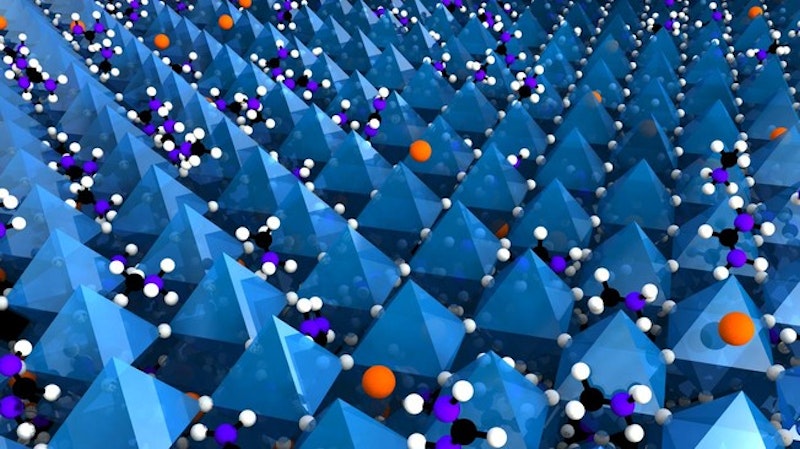 EPFL researchers are pushing the limits of perovskite solar cell performance by exploring the best way to grow these crystals.
Michael Graetzel and his team found that, by briefly reducing the pressure while fabricating perovskite crystals, they were able to achieve the highest performance ever measured for larger-size perovskite solar cells, reaching over 20% efficiency and matching the performance of conventional thin-film solar cells of similar sizes. Their results are published in Science.
This is promising news for perovskite technology that is already low cost and under industrial development.
However, high performance in pervoskites does not necessarily herald the doom of silicon-based solar technology. Safety issues still need to be addressed regarding the lead content of current perovskite solar-cell prototypes in addition to determining the stability of actual devices.
Layering perovskites on top of silicon to make hybrid solar panels may actually boost the silicon solar-cell industry. Efficiency could exceed 30%, with the theoretical limit being around 44%. The improved performance would come from harnessing more solar energy: the higher energy light would be absorbed by the perovskite top layer, while lower energy sunlight passing through the perovskite would be absorbed by the silicon layer.
From dye solar cells to perovskite
Graetzel is known for his transparent dye-sensitized solar cells. It turns out that the first perovskite solar cells were dye-sensitized cells where the dye was replaced by small perovskite particles.
His lab's latest perovskite prototype, roughly the size of an SD card, looks like a piece of glass that is darkened on one side by a thin film of perovskite. Unlike the transparent dye-sensitized cells, the perovskite solar cell is opaque.
How to make a perovskite solar cell
To make a perovskite solar cell, the scientists must grow crystals that have a special structure, called "perovskite" after Russian mineralogist Lev Perovski who discovered it.
The scientists first dissolve a selection of compounds in a liquid to make some "ink". They then place the ink on a special type of glass that can conduct electricity. The ink dries up, leaving behind a thin film that crystallizes on top of the glass when mild heat is applied. The end result is a thin layer of perovskite crystals.
The tricky part is growing a thin film of perovskite crystals so that the resulting solar cell absorbs a maximum amount of light. Scientists are constantly looking for smooth and regular layers of perovskite with large crystal grain size in order to increase photovoltaic yields.
For instance, spinning the cell when the ink is still wet flattens the ink and wicks off some of the excess liquid, leading to more regular films. A new vacuum flash technique used by Graetzel and his team also selectively removes the volatile component of this excess liquid. At the same time, the burst of vacuum flash creates seeds for crystal formation, leading to very regular and shiny perovskite crystals of high electronic quality.
Source and top image: École Polytechnique Fédérale de Lausanne