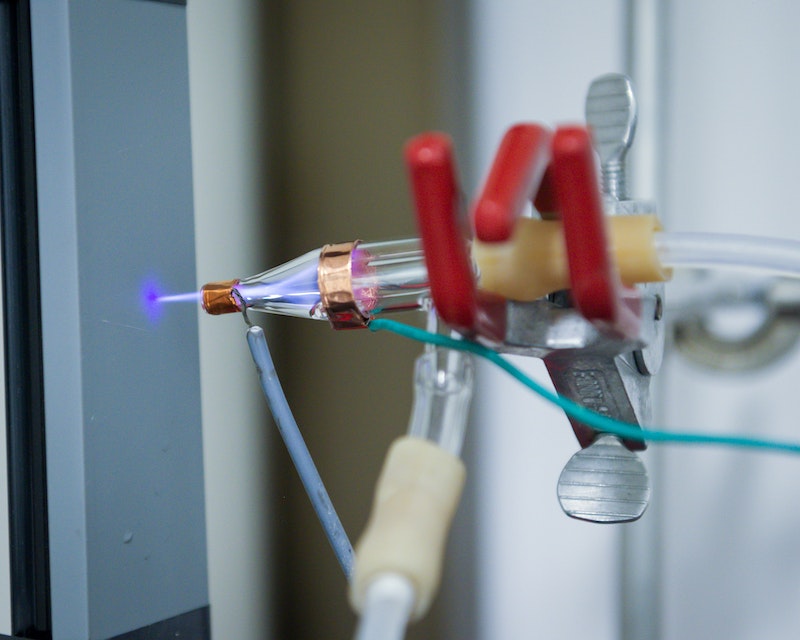 Plans begin decades in advance for a tremendous effort such as the first manned mission to Mars. The details are as fine - and essential - as how astronauts will breathe and eat and track their health.
"There's no doubt that the transportation is taken care of. The spacecraft will be developed," says Ram Gandhiraman, a scientist with Universities Space Research Association at NASA Ames Research Center. "But how are you going to sustain astronauts for one year or more? Equipment wears out, and supplies need replenished. This is work that also needs to be done."
To help prepare for the endeavor, Gandhiraman is creating a tool that will allow astronauts to craft materials in space using a jet of plasma - an energized gas of free electrons and ions. (Plasma is the fourth state of matter, joining the more familiar solid, liquid and gas.)
The plasma jet can spray tiny semiconductor particles onto cheap, flexible surfaces, such as paper or cloth, and form wearable electronic circuits. Astronauts can use these sensors to track their health and also the environment. The sensors contain small semiconductors tailored to detect biomolecules, such as dopamine and serotonin, as well as gases like ammonia in the environment.
The NASA team brings the sensors to SLAC's Stanford Synchrotron Radiation Lightsource (SSRL), a DOE Office of Science User Facility, to look at the fine details of the sensors' surfaces. This characterization allows them to optimize the process for printing sensors with the same quality every time.
Developing the Printer
The scientists need to be able to tailor the materials traveling through the plasma and control how they deposit on a surface. Even small defects can make the sensors nonfunctional.
"This is where X-ray spectroscopy is crucial," Gandhiraman says.
Every other month or so, Gandhiraman and his team would analyze sensors at SSRL. While developing the plasma printer, Ram worked closely with SLAC scientist Dennis Nordlund to characterize the newly printed sensors.
Nordlund would examine the plasma-deposited sensors using X-ray absorption spectroscopy and X-ray photoelectron spectroscopy.
"These techniques allow us to see what chemical groups are present at the surface of the fabricated sensors," Nordlund says. "This allows us to extract information about the material on an element-by-element basis, including the part of the chemical structure responsible for reactivity and the content of graphitic carbon - an important form of carbon that conducts well - present in the samples."
This helped solve one of Gandhiraman's major challenges - printing exact copies at such a fine scale.
"Say we ramp up the voltage or the flow of the plasma jet, then you get different chemistries that result in loss of device performance or sensitivity. What causes the behavior was not clear," Gandhiraman says. "We needed to go back and forth and do an analysis on materials that we print. We used that information about surface properties to optimize the process here."
The plasma-printed nanomaterial forms a dense network of sensor and signal amplification materials better than other printing methods, including screen or aerosol printing. Another advantage: Plasma printing can operate at low temperatures, which means the paper or cloth is not destroyed during the process.
Plasma Printing in the Lab (and in Space)
In-space fabrication technology would allow astronauts to create the sensors - which become worn out with use - when the need arises.
"This printer should be able to use both Martian resources and waste or spent materials to fabricate devices on-demand in space," Gandhiraman says.
To make a printer that astronauts can use in space, the researchers needed to engineer the plasma jet with an easy-to-assemble, lightweight set-up. During a demonstration in Gandhiraman's lab, his research assistant Arlene Lopez turns a valve and gas travels through a plastic tube.
The gas meets a liquid containing carbon nanotubes, forming a mist that is zapped with electricity flowing between two electrodes. This creates charged plasma.
The plasma's excited electrons give off light, and the color depends on the composition of the gas. Today, it's a blue helium glow.
In the lab, gas comes from a canister. In space, the Martian atmosphere will provide the needed gas. And instead of plugging into an outlet, solar panels will provide electricity.
The researchers also had to consider the differences in gravity on Earth and Mars.
"For space applications, you need to be able to use the printer in micro gravity environment," Gandhiraman says. "That's one reason this plasma is very interesting - no matter what environment you have, the electric field will drive the jet through the nozzle."
The NASA team plans to collaborate with SLAC to develop even more applications for the versatile plasma jet. The researchers have already shown the jet can be used for sterilizing equipment. Next up - NASA is developing a way to use microbes to recycle metals needed for electronics during long-term missions.
The plasma jet is being tested to see how well it can print electronics using the metal "bioink" produced by the microbes. SLAC's X-ray spectroscopy tools will look at the purity of recycled materials and pinpoint any contaminants present. The researchers also plan to look at how the same recycling and printing process might be used here on Earth.
Source and top image: SLAC National Accelerator Laboratory
Learn more at the next leading event on the topic: Healthcare Sensor Innovations USA 2020